Is 'SMASH' worth watching? 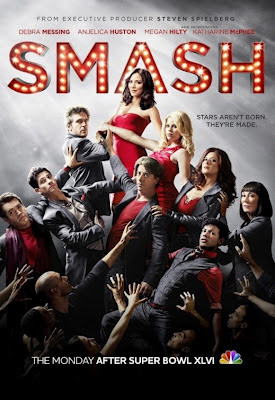 I've been torn about writing about SMASH. On the one hand, I love it. On the other hand, it's an adult show and I don't want to be responsible for interesting younger viewers in a show that is really not intended for their eyes.

Still, at this point in the season, I love it enough that I really want to let my readers know about it, so that those of you who are in the target audience can know my feelings about it, and maybe check out something that you might really love. Or on the other hand maybe you're a younger reader who is intrigued by it, but want to know what the content is really like. Well, whatever your demographic, read on!

SMASH chronicles the evolution of a musical, from its first conception to its Broadway premiere. It features the life of Marilyn Monroe as the piece that ties the cast together and how she inspires and speaks to a vastly diverse crowd of people.

Tom and Julia are a writing team who have successfully worked together for the past ten years. Played by Debra Messing and Christian Borle, they show us both a devoted friendship and the complicated creative process of song and scriptwriting.

Ivy and Karen are young actresses who are hoping to make their big break. Ivy (Megan Hilty) has been working on Broadway for the past decade, Karen (Katharine McPhee) is a starry-eyed newcomer from Iowa. Both are called back for the pivotal role of Marilyn.

Derek and Eileen are the director and producer respectively and face the challenges of starting off a new show. Derek is abrasive but somehow still intriguing (and played fantastically by Jack Davenport). Eileen (Anjelica Huston) gives us a look into the under appreciated but absolutely essential world of producing and let me tell you, they play out all the challenges of that job in faithful detail. They have to take an unfinished script and a $200,000 workshop and turn it into a full length $7M Broadway musical - no easy task by any standards.

Are they the most memorable characters you'll ever see on television? Perhaps not. But they're far more realistic than many casts we see these days, and furthermore they're true to the world of theater. But most importantly of all... they can sing. And can they ever sing!

Unlike Glee which focuses mostly on remixing covers of popular songs, nearly half of the music on SMASH is original. And even when the lyrics are (ahem) more adult than I want on my iTunes, I am still floored by the talent that is happening here. Seriously, if you love musicals and you want new songs, this is the place to go. Not only do you get the music, but you also get to watch the fantastic dance numbers which are masterfully performed. "Let me be your Star" won't leave your head, "Mr. and Mrs. Smith" with have you sighing at the cuteness, and "King of Hollywood" will have you rolling in laughter, while "On Lexington and 52nd Street" will break your heart.

But let's be honest. It's an adult show and it doesn't take place in a fairy world, it takes place in the gritty harsh reality of theater. Which means language, sex, backstabbing, and more gay characters than most shows. It also is absolutely vital because theater is so much more than lights and song and dance. Everyone who has ever gone into an audition knows the panic, the heartbreak, the desperate search to get a role - any role - and just be on stage. The performance business is grueling and SMASH doesn't sugarcoat it.

SMASH is a celebration of musical theater, and an exposition. It's Glee grown-up, but it's not Glee for grown-ups because it is definitely its own show on its own ground.

And there's a future coming for it. It's been renewed for a second season, features Bernadette Peters and Uma Thurman as guest stars, and supposedly will feature a staging of the entire musical for the season one finale.

So is 'SMASH' worth watching? My answer is yes, with caveats. If you can stand the objectionable content (which I can), I think it is a really enjoyable and intriguing show for anyone who loves theater.
Posted by Elizabeth Amy Hajek at 10:21 PM

I to had reservations about this show, but ended up loving it and can handle the somewhat questionable content.....the songs and dances are amazing though!

Isn't it interesting how in some contexts some stuff is just not worth it, but then in shows like this it is?

I'm so glad you posted a review for this! I agree about the "objectionable content"... because it's realistic, it really doesn't bother me that much. I'm so glad they renewed it- I'm looking forward to seeing where they go from here!

I know! And I'm so excited to see the finale!