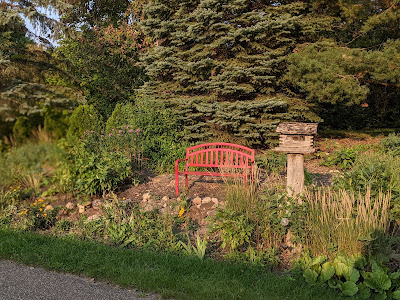 Yes, I know this is the longest I've ever gone without regular blogging, but I have a really good reason! Two of them, actually. First, in February, after a really intense and somewhat dangerous pregnancy, I gave birth to our second daughter, Rose. Then, in July, we moved to the country! We now live on some acreage that was previously part of my grandparent's farm that has been in the family for decades. I have cobblestones in my garden that were part of my great-great-great grandmother's cabin! 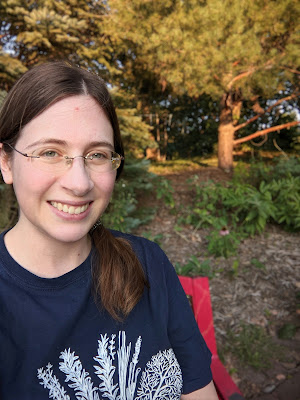 (You can kinda  see those stones in the lower righthand corner of the above photo!)
We'd been talking about moving to the country for a very long time. It was always the desired longterm plan for us, but financially we weren't sure how we'd ever be able to swing it. Then, with the pandemic allowing my husband to work from home longterm, and the housing market changing, we found God leading us out of the city.

We actually ended up about 25 minutes further west than I ever expected. I didn't really want to be this far. But we have my grandparents for neighbors and our property is more beautiful and perfect than we could ever have DREAMED. We have a picturesque little red barn that is over 100 years old, and the whole place has been maintained by master gardeners for decades. Our house stands next to a hill of 100-year-old oak trees--hence the name, Oakshire. 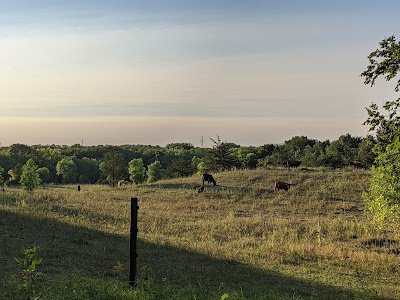 To the north, a herd of grassfed cattle graze, and we often go to watch the calves play. Our daughters are absolutely enchanted. Our eldest's affinity for animals and the outdoors was one of the reasons we knew we needed to move to the country. Even in the city we could hardly get her to come inside all summer, and she loved nothing better than to explore at my parent's house in the country, and visit the pigs and goats owned by their neighbors. 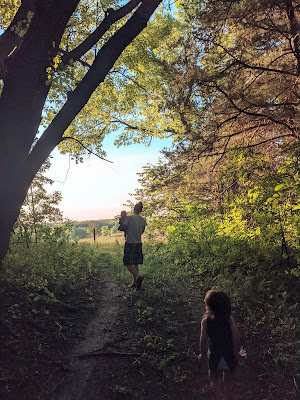 Now, despite the idyllic pictures, it's been anything but an idyllic summer. We own a ton of stuff--too much, to be honest--and my perennial illnesses meant that our old house was just not kept up as well as it ought to have been. Moving out was a mammoth task that nearly broke me. And that's with a TON of help. From the day we first saw the property to the day we moved, it was three months. And our baby was still a newborn!

(oh, and we did a garage sale too, to try to offload some of our stuff. We got rid of a ton, but not enough...)

Then there's the back end, where we had to paint the new house, assemble a fence for the kids play yard, and a myriad of other little tasks that never seem to end. Plus, you know, unpack. And baby girl decided to start crawling at six months so the adventures never cease.

All this to say, it's no wonder that my immune system crashed and I've been hit by one illness after the other for the past two months. We've had to rely pretty heavily on family help, which is the opposite of what we wanted to do. BUT, longterm, the new house is going to be so good for our independance. The layout is so much better for me to watch the kids as a deaf mom--I can actually see the living room from the kitchen! And the laundry is on the main level (As opposed to the basement, as it was at the old house). I've already found that the kids need about 1/4 as many clothes because it's so much easier to do a load of laundry! 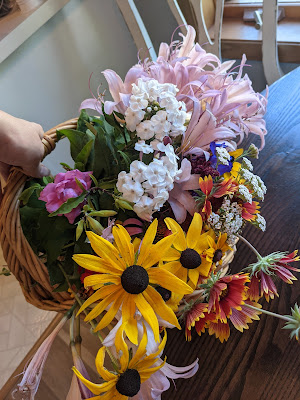 It's been difficult to write with all the stress and emotions of the summer, and once I did pick up my keyboard again, I decided to work on my novel rather than blog. I think that's still a good focus to have, but I think I should probably check in and update this page from time to time as well. As a busy mom, I find it way easier to post on Instagram, so, as always, I highly recommend keeping tabs on @elenatintil and @seamstressconfessions as well. You are also welcome to follow me on Facebook, but I am keeping my actual friends list down so I don't accept friend requests unless I know someone in person. I do regularly share interesting and fun articles I come across on a public setting, so if you enjoy the type of content I write myself, you'll probably also enjoy seeing what I post over there.
Posted by Elizabeth Amy Hajek at 8:18 PM