I've been sick all week, which has been pretty depressing. My aches and pains have kicked in with a vengeance (yes, we think it is Fibromyalgia now), and it has just been very unproductive. Typing hurts.

Also, I've determined that it is doubly lame being sick as an extrovert, because you go crazy not seeing people in addition to being miserable. Very thankful that my husband has used several of his lunch breaks to come home and see me... otherwise I would perish of loneliness. 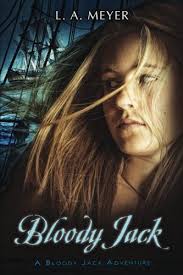 The one upside is that I've had plenty of time to race through the Jacky Faber adventures. All except the last one are on Amazon Unlimited, so I took this month to get my free trial of that... excellent timing, as that was right before I got sick. At least I've traveled the world vicariously through that roguish maid.

Which, by the way, they are very entertaining books. I was expecting just your average "girl dresses like boy, hijinks ensure" and was pleasantly surprised by the varied storylines and unique traits of the heroine.  The historical detail is astounding, and I learned far more than I expected to. Plus the literary and historical 'easter egg's (so to speak) are super fun to find.

However, the books are about a girl running around in a man's world, and a sailor's world at that. This does result in a lot of raunchiness, which, while it makes the story more historically plausible in a lot of ways, it does mean that the books push the upper boundaries of the YA genre. My sister was 16 when she first read them, and (at least for conservative readers), I wouldn't recommend them to anyone younger than that. Jacky has... interesting morals. It works for her character, but, well, maturity is everything when dealing with a character like that. And honestly, it gets a little over the top with how many different men fall in love with her. But, eh, they're good enough to read despite that.

Dear Elenatintil,
I just wanted to thank you for your blogs. I've followed them off and on for many years now, beginning with "The Shadow of the Bear" movie blog.

As a fellow, while intensely amateur, costumer and lover of costumes and handcrafts in general, I've greatly enjoyed "Confessions of a Seamstress." I was homeschooled all throughout my education, and now I'm in college for English Writing. (Are you familiar with Franciscan University? I believe you know AnneMarie Miller? I helped her with lace research for her thesis; I made Bobbinlace for about 5 years throughout middle school and high school.) I love to read and write, as well as sew and dabble in every craft I can get my hands on.

Basically, your blogs have often felt like the words of a kindred spirit when homeschooling throughout highschool got somewhat lonely.

I wanted to say hello today, because your book recommendations have been sublimely glorious for finding enjoyable, usually well-written, light summer fiction. Thank you! I am in a Great Books program at college, so summer is when I let my brain vegetate and renew its love for reading through fun fiction. It gives me strength to plug through the dryer stuff each semester.

I look forward to reading The Mermaid and the Unicorn! Hopefully it can be one of my summer reads next year!

a.k.a. The Evil Baroness of the State of Denial

Thank you Marie! It is so encouraging to hear that you've been enjoying my writings for so long! :) I hope it continues to go well for you!