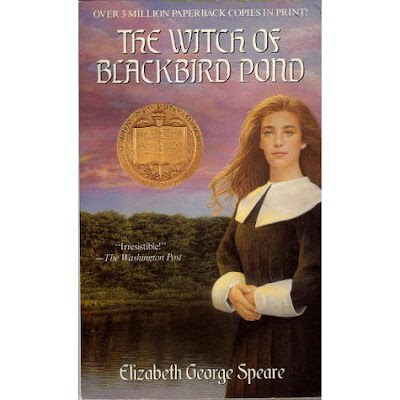 Quintessential middle school historical fiction, "The Witch of Blackbird Pond" was a favorite for a lot of my generation. I'm a fan of all of Elizabeth George Speare's historical fiction, but it's been some time since I picked any of them up and I was interested to see how they would read from an adult perspective.

Overall I found it still the compelling and engrossing novel that captivated me as a pre-teen, yet I found myself wishing that there was a longer version, with more fleshed out characters. Although the cast is well developed for the short span of the book, it is a story and setting that certainly could have filled a larger volume. Characters like Uncle Matthew, Aunt Rachel, Mercy and Judith are skillfully drawn with short paragraphs, but cry out for more story time.

Perhaps most surprising to me was finding how little time in the book is really given to the romance. The true romance, that is. I'd always liked the ultimate pairings in the book, but somehow I'd forgotten how little time is really given to Nat and Kit's friendship. If I had to make one change to the book as it is, it would be to flesh out that dynamic a little more. It relies too heavily on the typical 'bickering couple' chemistry and thus doesn't actually show us much of what makes Nat and Kit work as a couple, only what makes them 'click' dynamically.

The other slightly changed perspective I had was realizing that this is a very similar time period to that of "Pirates of the Caribbean" and really, Kit has a lot in common with Elizabeth Swann. This gave me more appreciation for and understanding of the world Kit left behind in Barbados.

That said, it is an award-winning novel for a good reason, and I enjoyed the reread as an adult (even if it was much too short). I'll be happy to pass it along to my own kids for reading in the future.
Posted by Elizabeth Amy Hajek at 5:30 PM No comments:

The Future of "The Song of the Fay" and my other writing projects.

I've been talking with a few people about the future of "The Song of the Fay" lately, and I realized there are a few non-spoilery bits of info I could pass on to my readers.

First off, it IS a series! I have four books planned, God willing, and then we'll see what comes next. Each book will star characters from the previous books, BUT they will not all have the same main characters. Furthermore, the will be told from third person POV (point of view), which allows me to have multiple POV characters without getting confusing. And, finally, although books 1 and 2 are both set in Paris, this is not an exclusively "Parisian" series, or even one that will be completely set in Europe.

Book 2 ("The Professor and the Siren") is, of course, a prequel (though meant to be read second in the series), and features the Morlands as POV characters. It is set about eight years prior to "The Mermaid and the Unicorn" and will include many of the magical Fay from that book, as well as introducing new characters and types of Fay. I am currently 60K into the second draft of the book, all of which has been written in the past 10 months. It is due to be a bit shorter than "Mermaid" so I am hoping to get it published on a much quicker timeframe.

Book 3 ("The Selkie and the Queen"), takes place directly after "The Mermaid and the Unicorn" in Scotland. It is currently written to be told from the POV of Kate, Derek, and one other character whom you'll meet pretty early on in the book. Abby and Pete, who were minor characters in "The Mermaid and the Unicorn" get much larger roles in this book, but not POVs. Although Daphne is back in the US at this point and thus not an 'onstage' character (so to speak), she is still friends with the main cast and will have some updates. I've written about 10K so far, and hope to get more done when "Professor" heads off to the beta readers.

Book 4 is developing into a plot I'm pretty excited about, but at this point in time I need to be pretty cagey about it. I haven't written any of it yet, but I'm developing the cast and setting in my head. As of today, I've only told three people the premise of the book, but they've been very positive about it.

At this point, I feel that God is asking me to write these books before moving on to any other projects, except possibly my first sewing book. I have part of a draft of a super-hero chick lit novel (first of a series) that I really hope to further develop and publish eventually, but I'm not sure when I'll get the Heavenly green-light on that. We'll see!
Posted by Elizabeth Amy Hajek at 12:43 PM 1 comment:

The Lord of the Rings (pt 1) - Revisiting Childhood Reads

I'm currently rereading "The Lord of the Rings" for the first time in a decade. (I basically overdosed on them in my teens by reading them at least half a dozen times in about four years plus various other Tolkien works and knew them far too well to read again until now).

As a youth, I was a speed reader, and this time I'm taking the series a bit slower. I'm also forcing myself to read everything--I'll admit that on a few past reads I would skip the parts I found creepy or boring (the barrel-wrights, a lot of Sam/Frodo/Gollum stuff). But this time I really want to refresh my memory on everything.

The Fellowship is perhaps the most difficult since it is the one I read the most and know the best. However, even for all of that knowing, there are still things that I'm 'rediscovering' anew. For instance, the movie versions became so predominant in my visual memory, that I forgot how Merry starts out as such a strong leader. Basically, whenever Merry is around, he's making as many or more decisions for the little group of hobbits than anyone else. In the film he is regulated to a prankster alongside Pippin, but in the book is is portrayed as a steadier, more capable character at the outset.

Another aspect of the book that strikes me in particular this time through is how, after each major brush with danger, the hobbits are given a chance to rest and recuperate. In our world of fast-paced action adventure series (fantasy or otherwise), we don't see this much anymore. But, in "The Lord of the Rings," Frodo and his crew are not given more than they can handle. They are pushed to their utter limits, which means that as they grow in strength, the rests become less frequent, but when rest is truly needed, it is always provided.

This reminds me of my own life. Jesus said that in this world we will have trouble, but he also promises to watch over our needs. My life over the past few years has been really, really hard, but God has provided me and Nathan with moments (and days!) of relaxation and joy amid the hardship.
Posted by Elizabeth Amy Hajek at 2:33 PM No comments:

I am revisiting some well-loved books from my youth this month. Just got through a re-read of "The Silmarillion", sped through "Beauty" and just this afternoon got through a quick read of "The One Hundred and One Dalmatians." 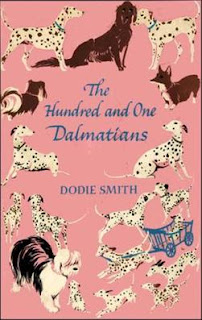 While I have a whole separate post I'd like to do on "Beauty," I wanted to first take a moment to talk about "Dalmatians" while it is fresh in my mind. Most of us grew up on the Disney movie version, which is fun, but pales in comparison to the book. However, due to the over-saturation of Disney everything, most people aren't in the least aware that there is a book, much less that the book is so much better than the movie.

Dodie Smith, also known for writing "I Capture the Castle" (which, for one reason or the other, I've never managed to get my hands on), has a tremendous sense of story, narrative flow, charectarization, and a charming narrative voice, all of which contribute to make the book a classic. She's created a system for the world of dogs that nestles nicely into our own. The book is hilariously funny, with charming characters straight from the 1950's of London, and includes several memorable cast members that didn't make it into the movie. Most notably among these are the real Perdita (young foster mama Perdita and Missus Pongo are combined into one character in the movie), Nanny Cook and Nanny Butler (again, combined into one character), a gallant old Spaniel, and Cruella's cat. (Yep. Cruella has a cat.)

Book Cruella is sleeker and less physically psycho than movie Cruella, but no less insidious (indeed, I find smooth and elegant Cruella much creepier). She also has a husband, a little man whom she married for his occupation as a furrier, and an obsession with copiously peppering all of her food.

Although given first names in the film, the book calls Pongo and Missus's 'pet's Mr. and Mrs. Dearly, and Mr. Dearly is not a poor musician, but rather a canny accountant. Perhaps influenced by the film, I always viewed the Dearlys as being rather poorly, but not actually, that's not so true! Each of them retains their childhood nannies as their maid, and though things are related as being 'rather expensive' they are still affordable to the Dearlys. Mr. Dearly's sharp mind is echoed in that of his dog, Pongo, who proclaimed one of the smartest canines in England.

I think the true test of a classic is whether it can be equally enjoyed by both children and adults. As a child I borrowed my grandmother's copy so often that it came to have a permanent residence on my bookshelf! I was delighted to find that rereading it as an adult was no less enjoyable an experience. Even though I have read the book so often as to have memorized some of the lines, I still met each scene with a new sense of wonder, no matter how familiar.

And, of course, this was my first time reading the book since we brought Mateo home, which made it especially sweet!

So, please! If you've never picked up this book, and have any sort of affection for furry animals (dogs AND cats), do give it a try! Whether reading aloud to your children or pursuing for your own pleasure, I think you'll be pleasantly surprised.
Posted by Elizabeth Amy Hajek at 8:32 PM No comments: