(This is a review for 5.3 and 5.4 of "Once Upon a Time and includes spoilers for both. Read at your own risk.)

Husband and I have been watching a lot of Psych lately, which is kind of the ultimate bro show. Seriously, Shawn and Gus are just the best.

OUAT is not, of course, Psych. It's actually pretty opposite, being one of the most intensely female action-driven shows since Buffy. It's not only got great lady characters, it has great lady friendships, which is super rare outside of teen shows.

In fact, it's been so marked, that a lot of us have complained from time to time that all OUAT does with young male characters is kill them off. Which is a pity, because they write their guys pretty well too. Charming, who has been the only young male to make it through all five seasons so far, gets sidelined a lot. Thankfully, they've written this into his character arc, giving him angst about his seeming uselessness amongst all the high-powered females (and, y'know, Rumple). This has led to some half-hearted hero acts in the past, but last week in 5.3 "Siege Perilous", we got not one but two awesome bro-ventures with King Arthur and Prince Charming, one in the past (creepy lake!) and one in the present (pick-up truck jousting!!!) On a smaller scale, the other funniest moment of the episode also went to a guy scene, with Hook hilariously misconstruing what Robin meant by his description of a sonogram.

This week's episode was a little more subdued in the 'awesomeness' factor, but "The Broken Kingdom" tackled another sidelined topic - marriage. In the episode we see the contrast of Arthur/Gwen's crumbling marriage, and Snow and Charming's marriage which can not only weather big fights, but grow through them. Marriage, not just romance, has always been a key underpinning of "Once Upon a Time" but last season it was a lot more about a broken marriage (Rumbelle). It's awesome to see the focus on the power-team Charmings again - and not in the annoying "it's an affair but it's not really" way from Season 1.

I really should have guessed earlier that Gwen was under a spell. I mean, this is a show that abounds in magic of every kind. However, like much of tumblr I just thought that the weird "off" feeling from Guinevere was because she was evil/plotting... not because Arthur had pulled a "Midsummer Night's Dream" on her. 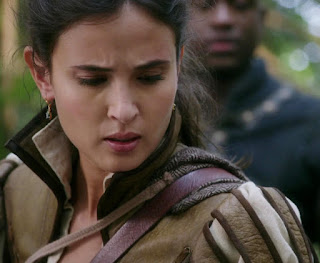 On that note, Arthur is definitely crazy. At first I thought maybe he was just really misguided, but 5.4 showed that he is certifiably insane. His intentions are more or less good, but his method of accomplishing them is totally screwed up. Personally I've never been a huge Arthur fan, so this doesn't bother me too much - and besides, OUAT already broke my heart and my expectations for canon characters when it destroyed Peter Pan. However, I would encourage Camelot fans not to give up hope completely; there is plenty of room for Arthur to be "cured", certainly more than there was for Pan, and it definitely is OUAT's favorite methodology. Although I find it more interesting if they don't' redeem all of their villains, I have to agree that writing Arthur as irredeemably evil/crazy would be a sour note in the show - which is too bad because my only other complaint from this season so far is NOT ENOUGH ROBIN HOOD!!!

However, our other favorite archer is back this week, with Emma demanding that Merida make Rumple like herself... "Brave."

(What about the awesome costumes? I have stuff to say about them here.)
Posted by Elizabeth Amy Hajek at 3:55 PM