It's not just Girl Power 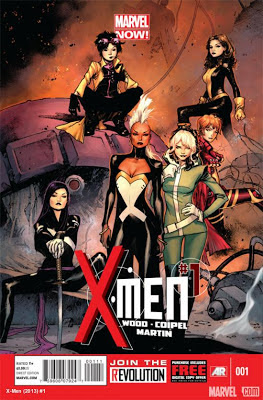 If you know anything about comics, you probably have already seen this comic, or at least heard the buzz about Marvel's new all-female line-up in the adjective-less X-Men title. Yes, it's a relauch of the numbering. Yes, it's an all female cast. But that's not what's so amazing about it.

What is amazing is that every single character in this book is A-List. (Yes, even Jubilee. I'll get there in a moment.) They were all pretty much defined by Chris Clairmont in the 80's. And they haven't all been on a team together since then. Every one of them has a solid fan following and at least three of them have pretty wide name recognition outside of the comic book world, if only because there are characters with their names in the X-Men movies.

Yes, they're all girls. Yes, it's a team Wolverine isn't on.

But most importantly it's good.

Issue #1 came out today and I have to say I am very pleased with it. Slightly thrown off by the inclusion of John Sublime as that whole villain arc is a little fuzzy to me (even though I've read Sublime stuff before). And he has a sister that is... a virus?

But tossing those two bits aside, the issue is fantastic. Great writing, excellent character showcasing (each one of them gets to do something Awesome), and fantastic art. It very organically brings these six women into one title without ever developing a 'team is born/recruited' arc. It just happens. They are friends, they're all working at the same school, of course they're going to run to Jube's assistance when she calls.

Storm takes on the role of leadership. While most of the girls have at one point or another led the team, Storm is obviously the eldest, most experienced, and most level-headed. She reverted back to her punk mohawk recently, while keeping the class in her costume that Ororo Munroe has always been known for.

Kitty is hilarious, keeping her hard-won maturity while still having a bit of that classic Pryde eye-rolling and nose wrinkling as she and Rogue adjust to being on the same team again. She's been the assistant headmistress of the Jean Grey School for the past year, which has basically been the same as actual headmistress since Wolverine is never around, and it's fun to see her once again being on a team rather than being in charge.

Rogue is one of those characters that writers like to play hot potato with - with her personality, that is. Ever since "Supernovas" she has undergone a ton of character growth. She's no longer the hot-headed southern gal who would fly off the handle at a moment's notice... something the "Uncanny Avengers" would do well to remember. However a lot of fans miss that Rogue, and "X-Men" does a good job of bringing back of her trademark spunk and stubbornness without loosing the maturity and wisdom she's grown into.

Rachel hasn't gotten to do much in recent years, as her last big adventure was in outer space. She's been taking a supporting role at the Jean Grey School, but hopefully the daughter of Jean Grey and Scott Summers from another timeline will get a bigger role in this title.

Betsy Braddock/Psylocke has long been confined to a male dominated roster over at X-Force (although that's gotten some more gals recently), so it is great to see her back in a feminine environment (which is after all very much what she started off in). Her sniper moment with her psychic bow was pretty awesome and I look forwards to seeing more of her.

And then there's Jubilee, who is an underappreciated character my friend Alicia has taught me to properly enjoy. I did seriously love her recent team up with X-23 (who will hopefully guest star here at some point) and think that the vampire twist was actually well-done. Throwing her a baby to play mama to? That's a curveball that they hit right out of the park. Little Viggo provides some iconically adorable moments and also allows us to see Jubilee at both her most mature and most vulnerable.

So what's all this to say? If you're a comic book fan, this is a must read. And if you're not? Well... this is as good a place as any to start.

And... *cough* I may or may not have a signed copy of the cover art framed on my wall...
Posted by Elizabeth Amy Hajek at 3:04 PM

I'm a bit fan of what Claremont did for the X-gals, so this sounds like a must-read for me...

Cool! Perhaps someday I can grab a copy! That'd be awesome. Although I still think Ororo looks weird with a mohawk. Just odd.