Sun and Moon, Ice and Snow 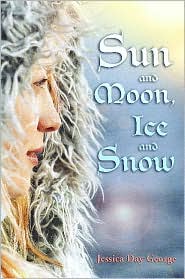 As administrator of Regina Doman's FT-Novel Forum, it's no wonder that I'm always on the lookout for good retellings of fairytales. Those that are well done are a joy to read - but they can be hard to find. So I was intrigued by the positive recommendations of "Sun and Moon, Ice and Snow" by Jessica Day George on the forum book thread.

The book came up in the discussion because one of Regina Doman's proposed future novels is based on the fairy-tale "East of the Sun, West of the Moon." This has raised an interest in the fairy-tale on the forum and there were questions flying about whether there were any good retellings of this tale out there. Several of the member's recomended George's book.

I've learned to have a pretty high opinion of what these young ladies suggest, so I quickly placed an order at my library for "Sun and Moon, Ice and Snow." It arrived two days ago and I read it within hours - completely enchanted by the story.

This retelling follows the original fairytale very closely - with the embellishments nicely added - much in the tradition of Robin McKinley's "Beauty." Our Heroine is a young Norwegian girl called "the pika" (the girl) or "lass" since her mother left her unnamed at birth.

The pika's family is poor, but their fortune begins to change when the young girl rescues and recieves a wish from a magical white raindeer. The raindeer gives her a name (protecting her at last from trolls) and the ability to talk to animals. Several years later, having gained a reputation of being extremely good with animals, a huge white isbjorn (Ice Bear or Polar Bear) bursts into cottage of the pika's family. He promises them riches and wealth if the lass will come and live in his ice palace for a year and a day.

Despite the protests of her older brother, Hans Peter, (a former adventurer with a mysterious tragic past), the lass accepts the isbjorn's offer. She and her pet wolf Rollo go out into the storm...to spend a year and a day in the enchanted ice palace of the isbjorn. There the lass discovers that she is at the center of a dark and dangerous troll enchantment, which threatens to destroy all she holds dear. She is faced with a dangerous journey to rescue all...East of the Sun and West of the Moon.

I was delighted by the characters, the setting, and the plot construction, as well as the narrative voice itself. It fits well into the world of Norse fairy-tales and is much better written than most books for this age group. It is appropriate for a pre-teen audience, but will most likely delight older readers as well - especially those who, like myself, have Scandenavian ancestors.

The only part of the book that I find of lesser quality than Beauty is that the romance is somewhat underdeveloped. This disappointed me. However the gap is filled by the strong and loving sibling bond between the lass and her brother, Hans Peter. Which actually fits the purpose of the story fairly well. Still, the weaker romantic plot leaves for a less compelling third act than might be desired.

Still I greatly enjoyed this book and would heartily recommend it to any lover of fairytales.
Posted by Elizabeth Amy Hajek at 2:06 PM

I actually got that from the library once!
I am always on the lookout for redone Fairy Tales - Regina Doman and Shannon Hale being my favorite.
Try Jessica George's redone Twelve Dancing Princesses! :)

Ahhh, reading your review, I realized I was mixing the other retelling I'd read up with this one. Yes, I did love this book, not just liked it ;)

Earwen--Princess of the Midnight Ball. LOVED that book :)

Oooh, that sounds really good...I'm going to have to check it out! I love "East of the Sun, West of the Moon" (one of my favorite fairy tales along with "Beauty and the Beast" and any version of "The Twelve Swans") and re-tellings of fairy tales. I also love stories set in Scandinavia, even though I don't have any ancestors from there. I've always loved that culture, however.

I just wanted to let you know that another book based off of this same fairy tale was recently published. Ice by Sarah Beth Durst. It was a pretty good read. It had some mild cussing but nothing severe.

A third book from this fairy tale is "East" by Edith Pattou. Beware! It is darn near PAINFUL to set down.