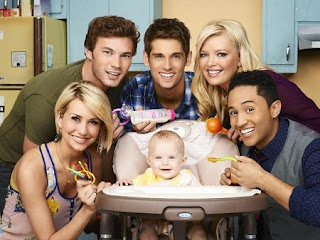 It's been nearly a year since I first started watching ABC Family shows, and other than Pretty Little Liars I've  enjoyed and become a fan of them all. More mature and complex than the Disney Channel, but geared towards a young adult audience and their parents, it has some surprisingly entertaining offerings.

Baby Daddy caught my eye with its fun premise - a single guy and his roommates raise his baby daughter. But would the execution hold up? While not as witty as The Big Bang Theory or as complex and subtle as Modern Family, Baby Daddy nonetheless packs a ton of humor into 22 minutes. It's over the top humor but it made me laugh out loud constantly (despite the annoying canned laughter track). And it was delightful to see these young people falling in love with a super cute baby. Although the guy characters were acting as though they were terrified of babies, you could tell that the actors actually love babies and are very good with them, which will be awesome to watch as the show develops.

It's aimed at mid 20-somethings so younger teens won't find it as interesting, but in the pilot episode, at least, it was on the cleaner side for a sitcom.
Posted by Elizabeth Amy Hajek at 2:07 PM