In Defense of Ramandu's Daughter 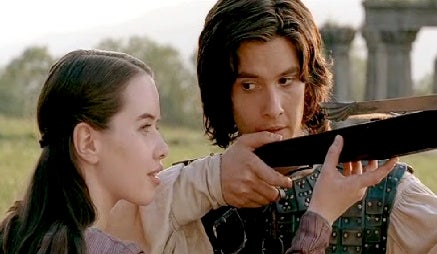 I will be the first person to admit that I enjoyed this pairing. The subtle but sweet romance between them was a very enjoyable part of the film and I think it worked with their character arcs.

One of the outcomes of this that some Narniawebbers predicted was that C+S lovers would then go on to hate the Caspian/Ramandu's Daughter pairing in Voyage of the Dawn Treader. I didn't pay much attention to that at the time because Caspian and the Star's daughter end up married- and what is a teenage flirtation compared to that?

Well, turns out I was wrong. We've got facebook groups going up now to champion the C+S cause. *sigh*. That's what happens when you stray even a little from the book. You end up creating a whole generation that is ready to totally throw the books away and create their own endings.

I'm sorry but that just really fustrates me. I loved the small romance (as I said before) but I'm certainly not ready to throw the Star's Daughter completely out of the picture! She is Prince Rillian's mother for goodness sake's! (And not to mention my favorite hero, Tirian's great-something-grandmother!)

There is no possible way that Susan and Caspian could end up together. She is barred from returning to Narnia- and even if she does end up in the "New Narnia" at her death (Once a King or Queen of Narnia, always a King or Queen of Narnia), she could not possibly "marry" him there since we know that in heaven there is neither marriage nor giving in marriage. (Not to mention the fact that without the Star's daughter, neither Silver Chair nor Last Battle could come to pass!)

So we are going to have to be satisfied with the fact that Susan and Caspian- like thousands of other young people- grow up, move on with their lives, and don't marry their high school sweethearts. Does that mean that their future spouses won't be even better than they would have been for each other? Of course not.

Friends, wait for Ramandu's Daughter. The filmmakers know that they have to make her a lovable and worthy character to suceed Susan in Caspian's heart. Because, remember, the moment Caspian sees the Star's Daughter, he falls in love with her. She is true love. She is the one he waited for.
Posted by Elenatintil at 9:41 AM

They CANNOT get rid of Ramandu's daughter! That would be horrible!

I 100% agree with you this time, Liz--people need to get over S+C. They were a bittersweet pairing, because they can never be together. There are a whole lot of romances like this. When Susan kisses Caspian, she knows she will never see him again--wherein lies the beauty and the anguish. Ramandu's daughter, however, is meant to be with Caspian. That's a whole 'nother ball game,

Hmm...they can't get rid of her without upsetting Narnian history. So don't worry. But I feel Susan and Caspian will only be like this for this film. But, the possibility of her coming back into the New Narnia wouldn't be exactly like heaven... Narnia doesn't have a heaven... or does it? Who knows...wedding bells are ringing...

Im a geek when it comes to comics,graphic novels and many books and since when was Hollywood ever faithful to their books?
I love them and Im aware studios wont make movies to make purists happy but to appeal to sell to the larger audience or else movies and tv shows wont be successful.
PC was not so powerful at the box office than the 1st and with Bob Iger the Disney head not so happy Im banking not all series will be finished. All the more to be creative with the movie. Caspian and Susan are so classy and this is kudos to the risks of TPTB,script,directing and especially the sparks and good acting by Ben Barnes and Anna Popplewell. To have such a large following for them now and have many theatres going oooohhh and aaahhh with the kiss means they are more than successful.
So many Regina Spektor videos online but this is my favorite....ABC used this for Grey's Anatomy but it fits Susan and Caspian more....
http://www.youtube.com/watch?v=PBjDtAXRCTQ

It may make PC more popular among some crowds, but there are a LOT of die-hard fans who were very turned off by it.

Morover, all of the S+C shippers who haven't read VotDT are going to be very angry when that movie comes out, and ultimately I think it's going to loose any ground it made up.

As I've mentioned before, I'm one of the middle grounders, who could enjoy the brief romance (and weep over the ending) but is looking forwards to meeting Ramandu's Daughter in VotDT.

She goes on to grow up to a great flirt in our world!

The c+s crowd obviously never read the books let alone throught it through.. while it was a touching moment in the caspian movie, susan is realistic when she says it would never have worked.. while she jokingly said she was 1400 years older, the truth of it (her age when she first came to Narnia, the time between Narnia's and the time she lived IN Narnia) would put her age closer to 30. The ones who never read the books don't know she almost married a prince from the southern lands along the coast and while it is never said, her breaking off the wedding to the (bad) prince may have been the impitous for the talmarians to attach Narnia. Granted, susan may have been caspian's first flame, but that does not put her to the level of a high school sweetheart, just his first crush.

Kris Kringle was right when he said susan had no trouble making herself heard.. she would not have been a good match for caspian as she was use to being large and in charge (not to mention being hyper critical) and would have made his life miserable.