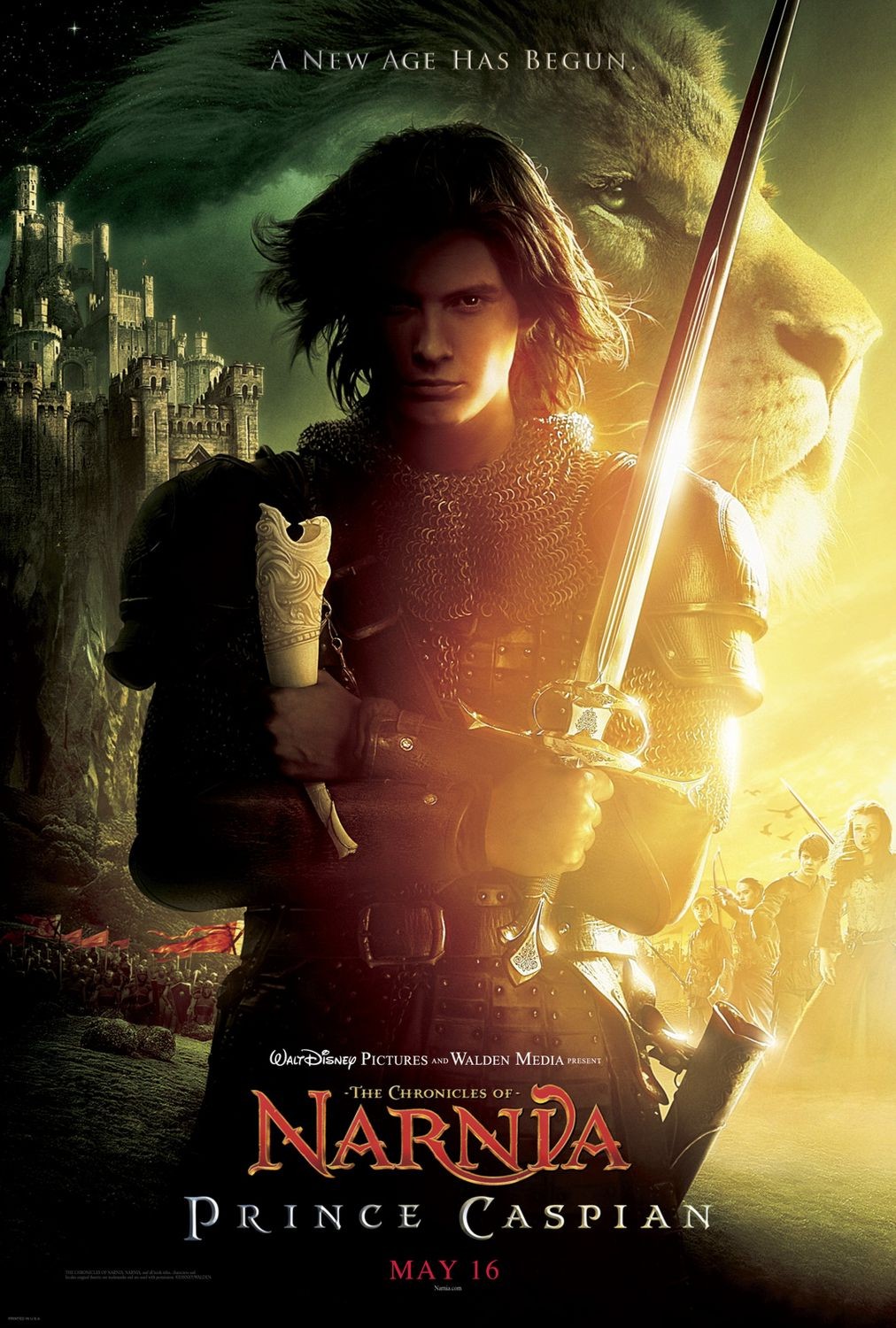 Plain and simple, those three words describe my feelings about this movie. There is more to discuss, of course (there always is), but it has beena long, long time since I have so thoroughly enjoyed every minute of a movie.

Yes, I'm a big Narnia fan. But with LWW, that worked against me. I was so disapointed with the script for that movie- loved the actors, but everything else fell rather short.

Not so with PC.

First of all, I want to give big kudos to the script writers. They really made a gigantic leap in the process and totally pulled this story together. PC is probably the most difficult book in the entire series to adapt and I think the writers did a brilliant job. The pacing was good (though a few of the battles seemed a tad long) the humor was almost completely smooth (and not forced), and- this is the best part- they actually used lines from the book- not once, but over, and over again. And they worked! I was so happy with the script and delighted that close-captioning meant that I could enjoy every line of dialogue! (Although what was up with claiming that Miraz had recruits from Tashbaan and Etinsmoor? Not to mention Galma!!! Probably the only lines of dialogue where I went...do your research, people!)

Peter's changes have been discussed in other reviews as adding to the faith message of the story. I totally agree with that and I'm not going to dissect that here.

What I do want to discuss is Susan. Yes, she fights. However, there is a subtle thread running through the movie that she actually is very hesitant to shoot anything. The night raid is a bit contradictorary, but it almost feels like another issue altogether.

And her "relationship" (friendship!) with Caspian was handled beautifully. It felt completely natural that those two, under the circumstances, should have an attraction and interest in each other- but it was also natural that they didn't really have time to handle it. Su, brilliantly, says "It never would have worked- I'm thirteen hundred years older than you!" And I felt that the whole thing was bookcased nicely by the interest of the young man back in England...it set up her future so nicely. And she didn't whine! I hated Susan's attitude in LWW- which is actually much closer to her attitude in the book version of PC- I'm so thankful that, having given her enough whining in LWW, they let her thaw out more this time around.

Edmund was definetely a favorite among my group- he lives up to his title "Edmund the Just" and is a good steady character to have. Plus I absolutely love how they worked his electric torch into the night raid! Fantastic idea!

Lucy continues to be the darling of the films. I was a bit shocked by her role in the "Sorcery and Sudden Vengrence" scene- but my friends seem to disagree. Am I the only person that finds if offensive to see a 12-year-old girl jabbing a knife into people? Especially the "healer"? However, her journey with Aslan was very well done, and she has some lovely lines that she delivers with perfect "Lucyness".

Trumpkin- delightfully handled. Definetly a favorite. Peter Dinklege is a brilliant actor and I am so glad that they were able to get him for this role.

Reep- very well done. A bit more comical than I would have written him, but not as much as I feared.

The Telmarines were also very well fleshed out. General Glozelle, especially, was a great character to watch. And I loved Prunaprismia's role in the night raid/bedroom scene.

Caspian himself...well what can I say? I've been a Caspian fan ever since the trailers started coming out. Excellently done- not nearly as arrogant as he could have been. I did feel that he could have used even more screen time, however, and I wonder if some of the Susan/Caspian scenes that ended up on the cutting room floor could have added to that. However, I'm guessing that I will be more satisfied when I watch it a second time.

The design elements were fantastic- particularily the costumes. I had been somewhat fustrated with some of the costume choices in LWW- but PC, for the most part, was beautifully and delightfully dressed. This movie really should be a contender for Costume Design at the Oscars next year, but since it's a "kids" movie and "summer action flick" I doubt it will get any serious consideration.

There are perhaps only two concerns I can think of adding. First of all- the pop song over the last few scenes- although it worked really nicely, did annoy me. It felt a bit too "Disney" and cliche. I'm not sure that it was really horrid or anything, just a bit unexpected.

Secondly- this really feels like a PG-13 film to me. There is almost no blood- but it is very, very intense, and there are some scenes that younger kids could find very disturbing. Nothing more intense than Harry Potter 2 and 3 (which were also PG) but I think those could have gotten a higher rating as well. Still, I know they worked really hard to get this film in proper PG shape, and I'm glad that they did. It's just worth noting.

All that aside, I will say once again- I loved this film. It could very possibly become one of my top favorite films. I hope they stay on a fairly similar path with VotDT (although it shouldn't need quite so much scene shifting).

If you haven't seen it yet- go ahead and make the time! It's fun, entertaining, has food for thought, is artistically beautiful, and, to top that all, is almost 2 and 1/2 hours long. Definetly worth the price of admission.

I echo nearly everything you have said.

Except about the song at the end. I probably would have cried anyways, if they went through the door to silence, but the music there just made it... ah. *wipes her eyes* :D

Beautiful review. I have to admit that I am just now reading the Narnia books...aloud...to my children. I won't let them see the movies untli we've read the books. I think I need to use your "reading list" as MY summer brain enhancement exercise (though I HAVE read some of them!)
Blessings & Peace, EJT

Thank you! I'm so glad to hear that you are reading the books to your children! I think they are wonderful read-alouds. (I'm reading them aloud to the children I nanny).

LOVED THIS FILM!!!!!
Great review Elena! Mine ain't nearly as good. Well, it's my first try so...

I agree overall with your view on the movie... a few things I feel different on though... such as Reepicheep being "too comical". I don't think he was at all. He was definately needed for comic relief, but I don't think that he himself would have ever thought that he was being comical. What makes Reep so funny is that he is so serious.

While I don't think Prince Caspian will ever be a top ten favorite for me, it still is an impressive film. We'll see how it grows on me.

the makers of Prince Caspian kept to the original story surprisingly well... i heard they were going to make it into a silly pure-action flick, but thankfully this was not the case