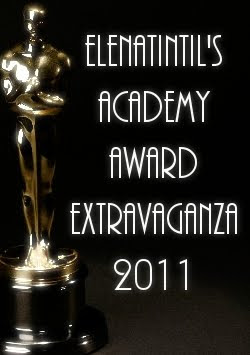 I LOVE movies. I've got a collection of over 100 DVDs myself, and I'm working on completing my fourth feature-length film. I love surfing the internet for tidbits of news and rumors, and I'll even pick up People Magazine in the doctor's office to see what I can learn.

So is it really any surprise that the one television event I actually look forwards to and watch is the Academy Awards?

The show has cleaned up in the years since I started watching. There have actually been some really fantastic programs, with my favorite highlight being Hugh Jackman's opening musical number two years ago. How can you top that?

This year's hosts are Anne Hathaway and James Franco, two actors I really enjoy. Not to mention they're both two of the youngest hosts we've seen in years and should bring a really interesting vibe to the show.

The official nominations were announced today, and in honor of this I wish to announce my own blog event to take place between now and February 27th.

We are going to have our own Academy Awards, and all of YOU are going to get to vote! I'll have a poll set up for each catagory, starting with the bottom of the list and working upwards to Best Picture. I'll be taking the polls down as soon as they close, so you'll want to tune in on February 27th to get OUR results, as well as the official ones!

There are also some fun interactive plans I have that I'll be revealing over the next week. Meanwhile, stay tuned for a post discussing my opinions of the 2011 nominations!
Posted by Elizabeth Amy Hajek at 1:11 PM

I'll try not and go Inception fanboy on it. ;) There are some seriously good movies up against it.

Eeeep, this sounds like SO much fun! Great idea!