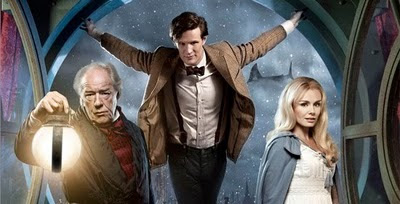 It's Christmas Eve and Rory and Amy are on their honeymoon cruise... only catch? Their ship is a space ship and it's careening out of control and due to crash into the nearest planet. It's up to the Doctor to save them. Only instead of fighting aliens or monsters, the Doctor is up against a cranky old man who could just about double for Ebeneezer Scrooge's twin.

Kazran is the old crank who controls the skies. A flick of a button could save the ship and 4003 people, but Kazran could care less. The Doctor realizes that persuasion is no good, and to change Kazran's heart he is going to have to influence the old man... in the past.

That's right. Christmas Special 2010 is a retelling of "A Christmas Carol" and does a spectacular job. In fact it could very easily be considered one of the most beautiful, heartwarming and romantic Doctor Who story ever (even the recent "Vincent and the Doctor" and "The Lodger" don't carry quite the same poignancy). It's a Christmas Special that actually feels like Christmas - something that has been lacking from most of the recent specials. It is beautifully and exquisitely filmed and absolutely a joy to watch.

In many ways it recalls to me the Doctor Who episode "The Girl in the Fireplace" which was also written by Stevan Moffat. It has the emotion and character without the horror, and follows the same formula of romance through time. And though I am still a staunch David Tennent fan, it's no chore to recognize that Matt Smith grows stronger with each episode.

The rest of the cast is brilliant as well. Michael Gambon graces the production with his brilliance as Kazran, and performer Katherine Jenkins brings her ethereal voice to the part of Abigail (the romantic interest). The actors portraying young Kazran do a great job as well, especially the adorable Laurence Belcher as the youngest version.

Indeed, this special has become perhaps my absolute favorite, with only "The End of Time" giving it any rivalry.

I had my worries about Moffat as the head of the show, but this special on top of the last episodes of season 5 have given me complete confidence in him.
Posted by Elizabeth Amy Hajek at 10:56 AM