Once Upon a Time: Red Handed

My oh my. After tonight's explosive episode, I'm not the only fan in shock!

If you haven't seen the episode, don't read further, as serious spoilers follow the picture! 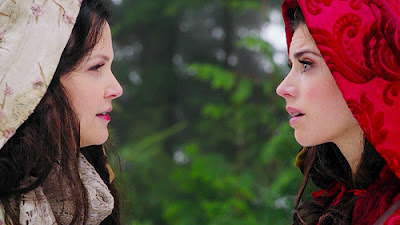 Speaking of the picture... can I take a moment to gush over Snow and Red's capes? I mean, honestly, they're so rich and the colors are so gorgeous... and I don't believe the juxposition of Snow White and Red as friends is unintentional. Seriously, how could the writers NOT want to evoke "Snow White and Rose Red" for the die hard fairy tale geeks?

Anyhow. On to the meaty stuff.

In Fairy Tale Land:
The first half of the episode was fairly predictable from what we'd seen in trailers. Red lives with Granny, wolf in the woods, everyone wants to kill it, forbidden love - oh, and Snow shows up. For those of you who saw last year's "Little Red Riding Hood" you may have felt (as I did) that the episode was a total rip off of that movie. The werewolf aspect was not a surprise at all.

Wow. I had suspected Granny, but not in a million years would I have suspected Red. In a movie they couldn't have pulled off something like that with a protagonist, but OuaT condenses things into such a short time frame that we never have a chance to notice that Red is never around when the wolf is. Because, well, WE are never around when the wolf is!

Although... poor Red. Perhaps the most shocking part was that she killed (and ate?) Peter. I mean... really? Isn't that going a bit far? Unless he turns into a wolf later...?

In retrospect, the title pretty much gives the twist away, although only an extremely astute watcher would figure that out!

At long last we get some more time with Ruby! From day one I've been intrigued by this girl with the bold hair and dramatic clothes and have been very patiently awaiting her story. And she was a character worth waiting for! I'm sad we wont' get to see her continue working for Emma, but it was cool how her wolf abilities transfered over to Storybrooke to allow Ruby to track down David and...

The heart. Did anyone NOT guess that it was a heart in there? The only question remaining is - whose heart is it? Obviously no one thinks Mary Margaret did it - suspicion is squarely and determinely on Regina for us watchers. But some fans think that it might be Graham's heart. I disagree because we saw Regina hide away Graham's heart under the crypt, and the box is suspiciously near where Kathryn disappeared.

But is Kathryn really dead? The absence of a heart doesn't mean death in this world, and Kathryn could be a prisoner elsewhere, under Regina's control. Another thing to consider. If Kathryn is alive and without a heart, there is nothing to say that this loss of a heart happened recently. What if Regina took it long ago - perhaps even back in the fairy tale world!

Things are really heating up now, aren't they? What are you speculations for the rest of the season? We have just six episodes left, with appearances scheduled from a young Snow White, the evil Queen's mother, and a special trip to Wonderland with the Mad Hatter!
Posted by Elizabeth Amy Hajek at 10:09 PM

Last night's episode was one of my favorites (especially after the grumpy one, which I thought was one of the worst so far). I loved the whole snow and red story line. It was shocking, but in a good way.

I don't know what to think about the heart. I feel like it's about time someone found out something about the fairy tale world... or Emma finds out Regina's up to something evil. I guess we'll just have to wait and see.

Really? I thought "Dreamy" was adorable. But then I guess that's the thing about fairy tales - there's one for everyone. ;)

I think we're really close to someone in Storybrooke coming closer to the truth. I'm not sure who it'll be - Emma is most likely. But with the heart, David's trance, and Ruby's super tracking powers, there was a LOT of weird stuff happening this week!

Yeah, I thought the last one was cute-it was just also really cheesy (more so than usual). I think, in addition to the one last night, my favorite so far have been the rumplestiltskin one and the jiminy cricket one :)

There was a lot of weird stuff going on last week- I can't wait for Emma's revelation!

Maybe August W. Booth will be the one to discover the truth about the curse. I think it'd be cool if he and Henry teamed up or something. I'd LOVE to see those two become friends.

As for Kathryn...I don't think she's really dead. I've been thinking about her character for a while now and I've been wondering: What if she's Sleeping Beauty? There's got to be more to her story. Maybe a little bit more about her and Frederick.

There's an episode coming up called "The Stranger" and I think that will reveal more about August.

Abigail/Kathryn as Sleeping Beauty? Now that's interesting. Why do you say that? It's true that we should see her eventually, since Maleficent already made an appearance, but what makes you think it is Kathryn?