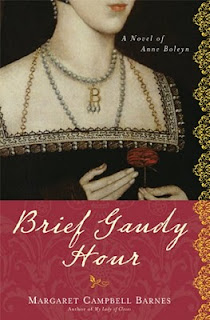 Oh entrancing, bewitching woman! Anne, how do you hold us captive five hundred years after your death? What compels us to read and write your story again and again and again?

"Brief Gaudy Hour" is a novel originally written in the 1940's that has a strange, haunting resonance today. It brings Anne Boleyn to life in a compassionate, honest manner that is both respectful and accurate (at least as far as the information in the 40's allowed).

Anne is a character with whom I have a sort of "Pride and Prejudice" romance. I've gone from hating her, to nearly revering her as the woman to whom I owe my current religious freedom. I suppose I see her in some was as the patroness of the current Protestant church, however unintended that result may have been.

She fascinates me, as I think she does many historians. Her marriage and coronation were completely unprecedented acts. So was her wretched farce of a trial and beheading.

What is so frustrating is that so many things about her will remain forever unknown. Her letters were nearly completely destroyed. We don't even know her date of birth. And yet she completely changed the world.

I've read many entries in the world of Tudor Fiction, and they all have their pros and cons. My favorite is undoubtedly "Coronation of Glory" (Lady Jane Grey) but I have to say, "Brief Gaudy Hour" makes a strong second. It portrays Anne very much as I imagine her to be. Neither saint nor sorceress. A woman aware of her own witchery and thrust into a situation where she had little choice to flee and ever chance of winning all by cunning wit.

It is an adult book, and deals with a court well seeped in sexuality. Yet it contains no overly graphic sexual scenes and treats the subject in a respectful yet historically accurate manner. I wouldn't recommend it for teen readers, but the college crowd and up should find it engrossing and well worth pursuing.
Posted by Elizabeth Amy Hajek at 7:24 PM

I agree that Anne is a fascinating character, and I feel rather sorry for her "trial" and execution. However, as a Catholic, I view her as someone who helped tear the Church apart. And that keeps me from liking her at all. (That and the fact that she became pregnant before she married Henry.)
~Hydra
From Books to Movies and Back Again
(hydrabooksandmovies.blogspot.com)

I have always had some bitterness toward Anne, since I am Catholic and saw her as a prime mover toward the break England had with the Catholic church.
I do not like her much, but find her an interesting character. I love reading about her, although I do not find any sympathy for her.
But...I can't deny that she is a fascinating character.

Yeah, religious affiliation really does affect how you view her. Of course you guys won't be so keen on her... and I'm obviously going to have some issues with Thomas More. That's only natural, I think.

Yes it is natural. I have always found that time period in English history interesting. I am taking a history class right now and in November I have to write a paper on a person, place or event from BC to 1600 AD, I found this to be the perfect chance to write a paper on Anne, I have a certain respect oddly for this woman. I wish the paper could be longer then one page(I know I am crazy college student :P) because, even though we don't know much about her, the effects that she had on religion, politics and basic homelife even is probably just as fascinating as Anne herself.

Mary Kate - I have to applaud you. I did a ten page research paper on Anne when I was in college, and it was crazy because every single book had something different to say about her. I will be interested to hear what aspect you focus on and what you write in one page!