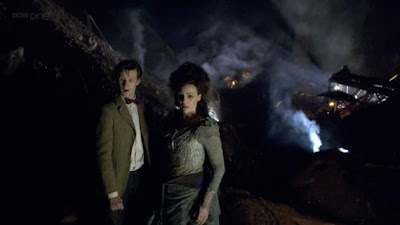 Oh my. Not the sort of fun news one expects to actually wake up to...
http://primetime.unrealitytv.co.uk/doctor-who-fourth-episode-title-revealed-the-doctors-wife/
(Please, do read the article before continuing this post...)
The Doctor's Wife?
Let me say it again.
The Doctor's Wife?
I think it's almost unfair to give an episode a title like that. Not if it ends up being... well a big cheat like "The Doctor's Daughter" and "The Next Doctor" were. Now "The Doctor's Daughter" ended up being a fantastic episode, and "The Doctor's Wife" has been written by Neil Gaiman so that alone leads me to have high expectations for the quality of the show.
Idris is a familiar character with a new face. Say what? So many possibilities. I am actually desperately trying to keep my hopes down and believe that it is not the actual DOCTOR's wife, but you know... just some random doctor...
Yeah. Nice try, self.
As much as I want it to be River, I have to say, I don't think it is and here is one simple reason. All the previous episodes with River have been written by Steven Moffat. This one is not. She is his special creation and I don't think I'd want to see her written by anyone else (unless she became more of a regular and that just was the way it had to be).
What interests me is the very Victorian look of Idris's clothes. Is this just a planet where people dress that way? (As in "A Christmas Carol"). Or is it an episode that takes place in the past?
And then there is the curious phrase... "an old acquittance with a new face." There are three possible ways for that new face. Drastically different age. Plastic surgery. Or... Time Lord Regeneration.
Oh the possibilities. Is it River Song with a different face? Is it a Time Lady come back? (ROMANA? JENNY?)
Won't be much longer until we find out. The Season Premiere is less than a month away!
Posted by Elizabeth Amy Hajek at 9:30 AM

You've got a point in that the style, cut, shape and hair (from what we can see) could just as easily be French Revolution as Victorian. However I don't think it is and here is why. If it were French Revolution, those colors and the cut of the clothing would be lower class. However, the high hair and the corset would never be found on a lower class citizen of France -- they were strictly upper class luxuries. So if it is our world's history, either someone didn't do their research, or it's Victorian. (Or upper class in a very poor disguise... but the corset really would be a dead giveaway.)