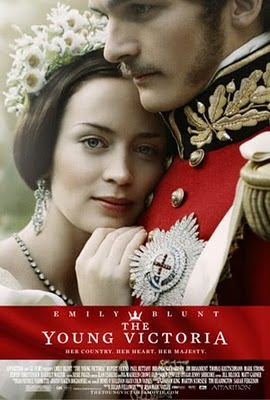 The Queen wore black and mourned for him for forty years... but why? Who was her husband and why did she love him so much? That's the story "The Young Victoria" sets out to tell.

Those of you who have been following my blog for awhile will remember I posted the trailer over a year ago when the news first started really circulating. Apparently Sarah Ferguson (Duchess of York) has been working on this project for the past 17 years. Now that is dedication!

And I'd say the 17 years were well worth the wait.

"The Young Victoria" is easily one of the best historical pieces I've seen in a long time. It breaths life and passion into a story that could so easily have been left a dowdy "dialogueshotinamuseum" piece. Instead breathtaking cinematography, Academy Award winning costumes, and phenomenal acting bring to life a beautiful story of love and coming to age as the most powerful Queen on earth.

Victoria, age 17, is a princess and a prisoner. She is the only surviving child of the three royal brothers - two of which have already passed away, making her the heir to the throne of England. In fear for her life, her mother (The Duchess of Kent) and her mother's controller (Sir John Conroy) have bound her in rules regulating everything from the books she reads to not going down a flight of stairs without holding someone's hand.

Meanwhile, her cousin Prince Albert is also being trained for a role - albiet a slightly differant and less certain one. Their mutual uncle, Leopold of the Belgians, has been plotting a match between his royal niece and nephew since they were born. At his orders Albert works daily to mold himself into the ideal suitor for the young princess.

But after years of suffering the reign of Sir John Conroy, Victoria is the last person on earth to be controlled. Though she is attracted to the handsome, sincere and passionate Albert, she senses the adults working behind the scenes and resents it.

Then enters the charismatic, sensetive and kind Lord Melbourne, who is to become Victoria's first Prime Minister. He immediatly slips into a paternal role and becomes Victoria's idol.

Meanwhile, back in Germany, Albert is left kicking up his heels. For you see, one cannot propose to a queen, one can merely wait for her to propose to you...

This is a fascinating and enjoyable movie, for those who love history or a good love story or good acting or simply just adore beautiful costumes. The relationships are fascinating to watch, as are the political manoueverings. And the star-studded cast (including Miranda Richardson, Jim Broadbent, Mark Strong and Paul Bettany) ensure that one is always watching an engaging and believable performance, no matter who is on the screen.

But of course what really makes the story work is the amazing performance and chemistry between Emily Blunt (Victoria) and Rupert Friend (Albert). They respectfully but realistically bring to life a passionate young couple, dealing with many of the same struggles that all young couples handle (though on a slightly larger scale!).

The movie is rated PG, and contains a few bedroom scenes with the newlywedded royal couple. Nothing explicit is shown (both remain fully clothed the whole time) and the kissing is real, joyful and pure, not gratious. However such scenes are probably not for younger audiences, and I would recommend this for ages 14+.
Posted by Elizabeth Amy Hajek at 10:22 AM

I think I remember seeing snippets of this on a flight to or from somewhere...probably Austria.

I just watched the trailer, and now I REALLY WANT TO SEE IT!!! :D We should be getting it on Netflix fairly soon (it, or Bright Star!). And I've always loved Queen Victoria...she was such a sensible person, a good queen, and she was the same height as me. :) haha