"Once Upon a Time" in Season 5

My favorite show is back and it is just as awesome as ever!!!

Let's get that SPOILER WARNING up fast!

First of all, I'd like to point out that the very first shot, Minneapolis 1989, freaked me out because that's when and where I was born. In fact, since I was born at 9:00 at night, I’m just gonna pretend it was the night I was born. Ignore me...

Then Arthur pulls up Excalibur, which has a really familiar design on the broken off end... the Dark One's dagger was formed from Excalibur? (Let's not quibble over the fact that Excalibur came from the Lady in the Lake, NOT the stone. It's still working out cool.)

Getting down to business, Emma's been carried off to the Enchanted Forest where Rumple prances around as a bit of her imagination, as sort of an evil Obi Wan "mentoring" her into following the dark side. She runs into Merida, who is exactly like Merida from the film, only older. While cool to see Merida in the flesh, OUAT is disappointing us by continuing to translate modern princesses word-for-word instead of reinterpreting them as they did all the old ones. (Yeah, it's to keep the little girls interested and selling merchandise, right?) Cue struggle - to kill Merida and steal the wisp or not?

Meanwhile, back at the ranch, Hook is running around following his heart, while Regina follows her head. Shennigans ensue, Zelena escapes, Regina saves the day, and then in a super epic scene everyone crams into Granny's and in whipped off in an actual Tornado to Oz the Enchanted Forest (although it really was almost Oz). And by "everyone" it really is everyone, down to baby Neal, Roland, three dwarves, and Granny. They even took Zelena, with Robin now refusing to budge from her side in case Hook manages to let her escape again.

I was a little thrown that they took the kids, but I guess if I were jumping between realms, I wouldn't want to risk another 28-year-separation from my newborn.

The gang arrives just in time to convince Emma not to squash Merida's heart, Emma trusts Regina with her failsafe dagger,  and then Arthur conveniently shows up (yay for prophecies, who needs cellphones?) and leads them off to Camelot.

Then quicker than you can say "We lost our memories AGAIN?" (and Snow does) everyone finds themselves waking up back in Storybrooke 6 weeks later, wearing awesome clothes (that I will review on the sewing blog next week) and no idea of what's happened.

Cue Darth Vader's Emma's entrance with an ominous "You failed" and a stone dwarf to punctuate the horror on everyone's face.

Like I said. OH BOY. This season is gonna be good.

Posted by Elizabeth Amy Hajek at 1:27 PM No comments:

I haven't written much about Doctor Who lately, and that's because of the season 8 finale. I just really didn't like it. Plus, the season as a whole was weak (although it had some really strong episodes). This is typical - each Doctor's first season is always weaker when compared to his later ones, as actor and writers struggle to really discover who the new Doctor is. So I came into season 9 without enthusiasm, but not without hope.

(Yeah, the Christmas episode was good enough to warrant a review, but not to get me excited about Season 9)

Of course, the nice thing about having low expectations is that it is pretty easy to exceed them. That said, the season 9 opener stands as an above average story by DW standards, and Capaldi proves that he has really come into his own.

Considering that I really did not like Missy at all in Season 8, I was surprised to find myself quite enjoying her presence in these episodes. Genuinely funny, and much more enjoyable to watch as a companionish character rather than an antagonist.

The plot with Davros was fascinating, and ended up going in quite a different direction than I expected. That said, my single biggest complaint with the story is that they never addressed the fact that the last time we saw Davros on screen, he quite definitely died.

Yeah, he could have been teleported away or something at the last minute... but it would have been nice to at least see this addressed. DW fans have had to come to accept unanswered questions in Moffat's reign, but this particular storyline really rubbed in our faces "This is DW, we do what we want and don't explain" with both the Doctor and Missy actually saying paraphrases of this. This just seems kind of mean to the fans, who are just doing what the Doctor himself does and seeking answers to weird things.

Complaints aside, I loved loved loved Capaldi's entrance on a tank wearing sunglasses playing an electric guitar. It was so reminiscent of Ten and yet helped illuminate who Twelve is as well. I also thought Clara was handled really nicely, and it was definitely creepy/cool to see her back inside of a Dalek.

Indeed, bringing Clara's story full circle now, in what is due to be her last season, makes me wonder if the Clara/Dalek connection will re-emerge again in the finale, and tie into her departure from the show. It certainly seems to be foreshadowed at this point.

Not to mention the fact that both episode titles seem to be referring to Clara - or at least, that is the best explanation I can come up with, if one reads "Magician" as "Doctor" and "Witch" as "Missy." Any other interpretations for "The Magician's Apprentice" and "The Witch's Familiar"?

Snake henchman was creepy, but utilized really really well. Invisible Skaro was a beautiful scene, and "Your sewers are revolting!" was HILARIOUS.

All in all, it was a not-perfect-but-still-solid opener and I look forwards to seeing what the rest of the season brings - and that's a better reaction than I was anticipating, so count me happy.


Posted by Elizabeth Amy Hajek at 3:26 PM No comments:

I've spent a lot of time in the past eight weeks reading web articles on my phone. So. Much. Buzzfeed.

Anyhow, a friend on facebook linked to an article on Kveller.com, which is a Jewish parenting site, and even though I'm not Jewish or a parent, I've still found the website fascinating to browse through. Ironically, it was only after I'd decided to regularly read the site that I realized it is also the blog home of Mayim Bialik, (Amy Farrah Fowler on CBS's Big Bang Theory.) 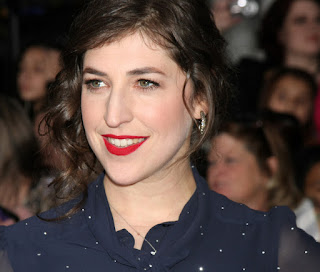 I already knew, of course, that Mayim is an unusual Hollywood player, in being both an observant Jew (Amy wears skirts on BBT because Mayim follows Jewish modesty/tznuit) and the holder of a Ph.D in Neuroscience. I didn't realize that she is an articulate and prolific writer as well, nor that she is a very outspoken proponent of breastfeeding.

I might not personally agree with everything she writes, but I certainly find it all very fascinating, particularly how she balances the demands of her job and her faith. (Gotta love the many posts she's written on finding appropriate award ceremony dresses!)

Anyhow, I'm looking forwards to seeing what is in store for her character on the show this season - the spring finale ended with such a major twist!!!!