The Force and Forbidden Romance - Symmetry and Storytelling in Star Wars

Wheeeee long blog post title! First up, I should warn you that if you are one of the very few people who has still not seen "Star Wars: The Force Awakens", you will definitely be spoiled if you read any further. So click away, please.

Secondly, if your first reaction is "EEWW ARE YOU SAYING IN THAT TITLE WHAT I THINK YOU ARE SAYING", no I am NOT talking about incest. Bear with me and keep reading, thank you. 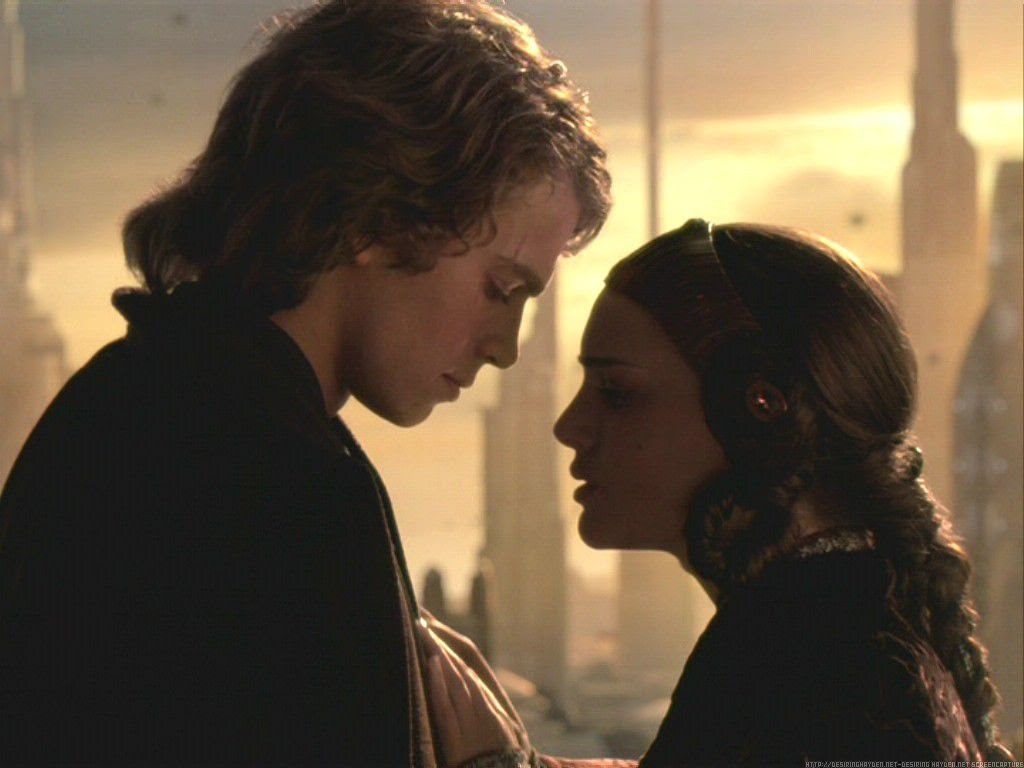 (BTW, I'm going to say Kylo Ren instead of Ben because it's less confusing considering Obi-Wan and all that.)

(Also, I'm not discussing the EU or TV shows in this article. I haven't seen the TV shows, and the EU is a moot point these days)

Before I even saw VII, my plot theory/wish was that they create symmetry in the love stories. I-III is about Anakin turning to the Dark Side because the Jedi have no built in capacity for romantic commitment. Yes, they are building off of real life monastic orders, but there's a big problem - real monks don't have magical powers, they have vocations. In Star Wars, if you are born with force powers, you basically either a) become celibate, b) choose to become evil, or c) go crazy because you have no training to control your powers. That is not to say that celibacy is an easy choice for all religious orders taking vows of chastity, but these religious folks can choose to marry without going crazy or evil!

Force users, at least pre-Empire, don't have this choice. And despite this resulting in the near annihilation of the Jedi, this is not a situation that is addressed in the original trilogy (almost certainly because it hadn't been imagined yet, although there's conflicting stories about what Lucas did and didn't have planned in advance).

Yes, Darth Vader chose, in the end, to reject the Emperor's lies. But we will never know how he would have managed his anger in a post-Emperor world, and I'm pretty sure he would never regret loving Padme - nor should he!

(Even if, personally, I think Obi-Wan and Padme would have made a far better match.)

Luke demonstrates how family commitment can keep a Jedi strong - but there's not yet any evidence how romantic relationships played out for him. That's the story that VIII and IX have to tell - as well as how Rey will be instructed to love - or not love.

And then there is Kylo Ren. His story is the opposite of Anakin's - instead of striving for light, he is striving for dark. Instead of giving into his hate, he ought to give into his love. What the romantic epic side of me is interested in seeing (the side of me that appreciates the high romance of the prequels even as I wince at the poor execution) is for love to redeem Kylo Ren. Not "girl reforms bad boy" type of love, but rather how true love, when encouraged rather than forbidden, is a strength for the light side. For true symmetry, this ought to mean that Rey and Kylo Ren are NOT related*  and that Kylo falls in love with Rey, and desires to seek the light because he sees happiness with her rather than with the power of the dark side.

*although Rey could still be AN IMPORTANT JEDI DESCENDANT if she is Obi-Wan's granddaughter, as theorized by some.

My friend Andy and I were discussing this and he mentioned how, though he agrees this subject should be tackled in the new trilogy, the internet would rage over a Kylo/Rey pairing as it would weaken Rey (unless written very VERY well). I responded that perhaps the ideal solution would be to go "A Tale of Two Cities" with it, and cast Kylo in the Sidney Carton role. We agreed this would hit the high drama of the Star Wars "Space Opera" style, without compromising Rey as a strong female heroine.

Now, on the other hand, this does NOT have to be romantic love. I mean, Rey and Kylo are almost certainly related, so he could love her as a brother or cousin and it could have nearly the same effect. However I do feel that they are setting up Leia to be Kylo's redemption. I'm fine with that, it has a symmetry of it's own, allows Leia to play the role that Luke did in VI and would be a powerful act of love and forgiveness. If this is the story that they go with, I won't be complaining, because it will be beautiful. After all, we don't get Mother Forgiveness as a story arc very often. And if they go this route, I hope they don't wait until they end of IX and kill him off - I'd like to see him have a chance to prove his reformation and fight on the good side.

(You know we'll never be sure how reformed Vader really was, because saving HIS OWN SON is not really enough proof that he's actually going to be totally good and never throw murderous rage fits again. Habits of over 20 years are really hard to break.)

But I still think a Jedi Romance needs to be addressed in VIII or IX. Yes, I'll say it again. The love story was poorly executed and highly criticized in I-III and rightly so. (Which is a shame because with proper execution it could have been really powerful). Due to this criticism, they are unlikely to make romance any kind of major focus for this new trilogy. I understand this reasoning, but to not address the Jedi/romance issue at all would, in my opinion, be a mistake.

With no romance for Rey explicitly set up in VII (yes, Finn has a major crush on her, but IMHO she is not in the least romantically interested in him), there's not much time to set this up in the younger generation. But I'm still going to hope that they at least address the romantic love issue, probably with Luke. Hopefully they give Luke a romance that strengthens his light side force (with his wife likely dying in the massacre and the reason why he basically gave up).

So, those are my thoughts. In a little less than two years we'll get a better idea of what direction they are taking, but we'll still be waiting quite awhile to see how it all plays out. In the meantime we are getting Rogue One, which probably won't touch the Jedi romance issue AT ALL (but you never know.)
Posted by Elizabeth Amy Hajek at 10:08 AM

This makes me feel a little less guilty for actually enjoying parts of the Episodes I-III romance storyline (it's so easy to make fun of, but there are parts that I like!). I love how so many people have been discussing the symmetry of Star Wars with the plotline of The Force Awakens, but a symmetry in romance never occurred to me. I'm now much more interested to see what they do in this area, if they do anything about it!

Didn't really think of that...I was trying to find exactly what it was that I felt was a bit off balance in the movie, but I didn't really consider that aspect. I totally agree that the romance of I-III was handled poorly, it could have been great. (In my opinion, it would have been that much better if Anakin wasn't such a Disney Channel brat). Your theories for what might be possible in the upcoming movies is definitely intriguing...I'm going to be mulling over that endlessly...