"I am Margaret" by Corinna Turner 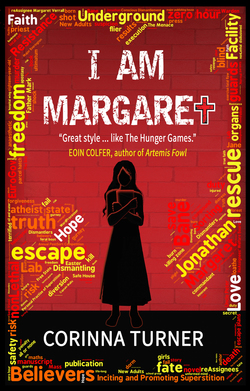 You guys know that I'm interested in any project Regina Doman is associated with. However, despite the good reviews I was hearing, I didn't pick up "I am Margaret" right away. Frankly, this past year has been really difficult for me and I wasn't in the mood for anything proclaimed to be another Hunger Games.

Then I was asked to assist with British idioms in the US version of Corinna Turner's novella "Someday", and I was absolutely captivated by it. Although it was an extremely difficult read, I knew I wanted to read anything else Turner had written. Regina had sent me a review copy of "I am Margaret" awhile ago, and I immediately bumped it up my reading list.

I wasn't disappointed - although I was glad I waited for my health issues to settle down.

"I am Margaret" is the story of a young woman in a future society with extreme population and belief control. Yes, yes, I know, "another dystopian novel starring a heroine?" That's what I thought too. But bear with me - this book is worth trying.

There are a lot of books that put a "Religious" spin on whatever genre is in vogue (although I haven't seen the paranormal romance genre tackled in Christian Lit). It would be easy to label this as a "Catholic Hunger Games" but this would be unfair to both books. Apart from 'dystopian' and 'teenaged heroine fighting the powers that be' the books are quite different. Margaret is not Katniss (I think she's more likeable), and the system is different for more reasons than just being British.

(Oh yes, it's set in England. You know I like that. For some reason when I first heard about the book I thought it was in Germany, which was part of why I wasn't interested. I have no idea why I thought that.)

Anyhow, the plot goes like this. At age 18, young people have to pass a bunch of tests, and anyone who doesn't pass is deemed not worthy of life (this includes anyone with deformities and handicaps of any kind). They are sent off to a center where they are held until there is need of their organs, which are then harvested. The rarer your tissue sample, the longer your chances are of living.

Margaret fails her sorting because of her mathematical dyslexia - otherwise her brain and body are in great condition, which quickly elevates her to a motherly role among a group of girls that consists large of the mentally handicapped. However, she's hiding a secret - she is a Catholic, and her parents work on the religious underground. Should she be discovered, she will be forced to either recant her faith - or be consciously dismantled.

Content warning, folks. Margaret is 18, and unless you're a pretty tough 16-year-old, I'd recommend this book to the adult crowd. Conscious dismantling is not a dismantaling of your consciousness (as I originally had inferred). Rather it is a dismantling of all the organs of your body while you are fully conscious.

And yes, this is described in detail in the book. It is not for the faint of heart.

However, despite this very dark undercurrent, the book is not nearly as dark as "Someday" and I can much more eagerly and heartily recommend it. There are parts that are difficult to read, but there is also sweetness and hope. Margaret is engaged to a lovely young man named Bane, and he passes his sorting. Ordinarily this would mean that he would never see Margaret again, but being imaginative and deeply in love, he swears that he will rescue Margaret.

Margaret is no frail damsel (although she's quite feminine and has a trademark fashion of wearing long skirts), and she masterminds the escape - but also insists that she will only leave if they can rescue all 70 of her fellow inmates.

One aspect of the series that was both greatly enjoyable and deeply personal to me was the presence of the disabled in the cast. (mild spoiler alert) Indeed, the very first person to be organ harvested is a hearing-impaired girl. This was pretty harsh for me to read, as (being deaf myself) I of course immediately put myself in her shoes. Wow.

Turner works with the disabled when she's not busy writing compelling novels, and you can see her knowledge and compassion throughout the story. One of the main characters is blind, and (as always) I was pretty excited to see a handicapped person starring in an action novel. I was very pleased with his role in the book and it's inspiring me to contemplate how I could write handicapped characters into my own novels.

At the moment, I'm anxiously awaiting my copy of book 2, "Three Most Wanted", which I will definitely be reviewing!(I stayed up past 1:00 in the morning reading book 1 - and I was already sleep deprived at the time, so I anticipate more late nights in the near future!

Book 4 is not yet out, but the first three books can all be purchased from Chesterton Press in multiple formats.

I'm so glad that you like the book! It's interesting how you mention the fact that disabled characters are present-I guess I really didn't think much about the significance of that, so it's neat that you comment on it. I enjoyed so many aspects about this book, and like you said, it's not really fair to compare it to "The Hunger Games," but I did really enjoy the romantic side of the story much more than that of "The Hunger Games." It felt a lot sweeter, though at times awkward, very real, and much less soap opera-ish to me.

Yes, the romance felt very real in this book - not overly dramatic as YA fiction often does (although teen romances feel tremendously dramatic to those IN them, haha). Having only read book 1, I felt myself thinking Johnathan would be a much better match for Margaret - but we'll see how books 2 and 3 go. They're on my kindle now!!!