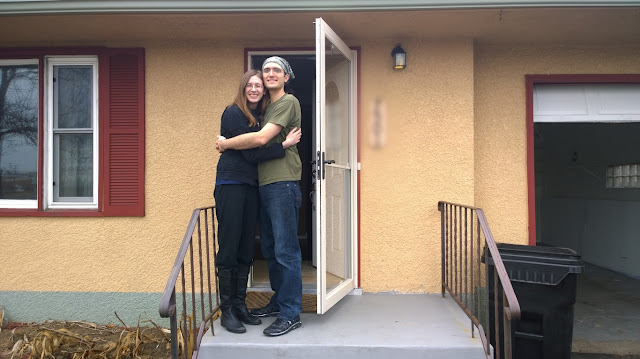 We've been living in the new house for almost two weeks now and LOVE it! The rest of the big move is tomorrow - looking forwards to having all of our stuff in one place again. I've been having a weird mix of good days and bad days - it's either one or the other, not really in-between. I was in the ER on Wednesday with my first bad migraine since December - the best stretch I've had in 8 months, so we're still feeling optimistic even though it really messed up my week. 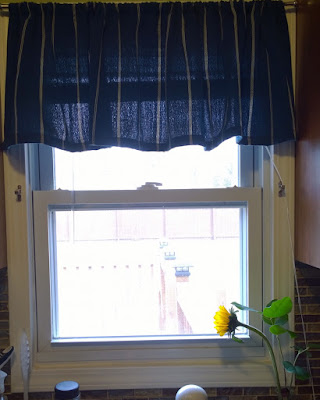 Just loving the house, though. It's so beautiful. 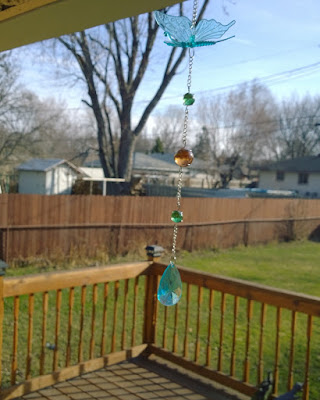 I live for the sunshine! Our back yard is just lovely. I can't wait to get a garden started! 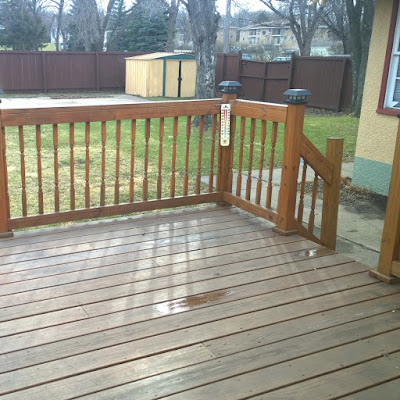 Our deck is looking pretty bare, but hopefully we'll find some affordable furniture before it gets warm out! 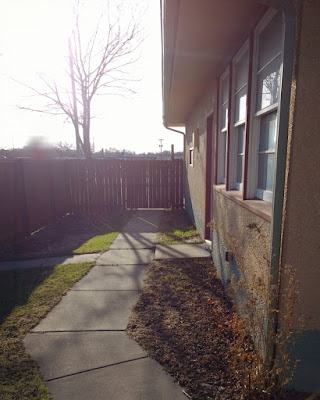 The inside is a mess of boxes, so you'll have to wait to see more of that. Hopefully it won't take forever to get unpacked!
Posted by Elizabeth Amy Hajek at 9:37 PM 1 comment:

I was pretty excited about OUAT starting up again (of course!!!) but... well I have to say this is one of the weaker openers. The beginning and end were GREAT scenes, but everything in between felt kind of 'meh.' Sure it was really lovely to see Regina find resolution with her Dad, but the rest of the episode was basically all the Cora/Regina/Snow stuff we'd seen before - multiple times. I get that they wanted to explore Regina's relationship with her parents and with them both dead it was kind of necessary as part of the Underworld arc... but really, the flashbacks were super boring. We have literally seen it all before again and again.

Hopefully, having gotten that out of the way, we can explore some new territory in the upcoming episodes.

Now, on to the good parts of the episode!

I seriously thought first shot was Snow. When it pulled away and I realized it was Emma, I was totally shocked. They really did a good job of casting that family, because WOW Emma and Snow's eyes are the same!!!

Oh my heart NEAL!!! That was such a lovely scene and I'm SO GLAD we got it! We already knew that Neal wouldn't be a big part of the Underworld plot because he had moved on, but it was a really nice emotional note to get that cleared up right away. Man, I love Neal so much. I expect this will be the last time we ever see him (although it's OUAT so who knows) and I feel like I can let him go now. Thanks, OUAT!

Seeing James again was HILARIOUS. Poor Snow. The birthday aspect of the flashbacks was weird, but it was fun seeing David and Snow celebrating with the dwarves. (But, Jiminy, WHY were you hiding in Snow's bosom? EW).  Henry Sr.'s 'ascent' was predictable, but very heartwarming nonetheless. From a theological perspective, they've so far done a nice job at creating an afterlife that resonates with various religious traditions, so that feels comforting to watch, rather than jarring.

Although, of course, it's all Greek to me. Hello Hades! Not at all a traditional portrayal there, but of course it is based on the Disney canon from Hercules, and given the audience of the show and the airing time, it's fitting that we get humor - although he is, of course, very dark underneath the amused face. Looks like he'll be an interesting villain to watch.

I have to say, it's rather odd going from the highly Christian tradition of Camelot to the Greek pantheon of gods. Especially considering that the Camelot story has not been fully resolved. OUAT likes to bounce around - but they do usually get back to most things at some point. I'm still betting on a time shift when they return from the Underworld, with all the babies several years older.


Posted by Elizabeth Amy Hajek at 12:48 PM No comments:

Because of my health issues, I work really hard to minimize stress in my life, which means I pretty much never post about anything political, anywhere. So I'm not going to talk about candidates or platforms or anything like that.

However, it is Super Tuesday, and this is a pretty intense election season with some really colorful candidates, and I just want to take a moment to encourage my US readers to look up the primary/caucus rules in their states, because it usually is pretty easy to go vote, and this is a year when there are a lot of variables and therefore voting this time means rather more than it can some seasons.

I have never actually done a real caucus/primary before. I think this is mostly because in high school I was involved in homeschool conference with this teen segment about politics and my experience with caucusing there was frustrating. (But *shamefulconfession* also because in past elections I've often been in Florida during the MN caucus.)

See, I was in a group with my friends, and I wasn't happy with the candidate they chose or the platform they chose to run on (some teen issue I thought was stupid at the time or whatever). So in typical strong-minded teen Elizabeth fashion, when it came time to vote, I left my caucus and voted for the group whose candidate was the only other person at the conference I knew. Then, fed up with the whole thing, out of my friend's good graces, and exhausted from lipreading for two days, I went out to hang with my mom and look at used books and school curriculum.

Yeah, even among homeschoolers I was weird.

Anyhow, what was weird and stuck with me, was that that candidate I had defected to got pretty far in the whole process - he ended up as "vice president" in the final election and they might have even had the winning ticket! (I don't remember for sure) Now that I understand the process a little better as an adult, it comes home to me that he got past that first round because he got that extra vote... mine!

So yeah, there are issues with the US election system and you can get me to rant about them in person (but never online), but sometimes a single vote can make a difference, especially at the primary level where everything is more chopped up between all the different candidates.