And the Giveaway Winners are...

Congratulations! I'll be sending you both emails today using the address elizabethAhajek[at]gmail[dot]com so keep an eye out for it!

If you didn't win but are still interested in reading the book, why not request your local library purchase it? Here's the lowdown on requesting title purchases.

And if you can't wait, you can always pick up the kindle ebook for $2.99 on Amazon, or read it for free with your Amazon Unlimited subscription!
Posted by Elizabeth Amy Hajek at 12:28 PM 1 comment:

My (updated) Introduction to Doctor Who

Well, it isn't dead, for one thing. Despite the overall mediocre and depressing season 8 turning off a lot of fans, the season turned around with some good stuff in season 9, and an amazing, back-to-the-2005-vibe season 10.


I've been explaining the show to a few people recently and I realized that my introductory blog post on the subject is not only seven years old, it is also one of the most hopeless fangirly things I have ever written. Read it for a laugh, if you dare!

Plus, at the time, I hated River Song. Boy have we come a long ways since then.

Since my husband and I have currently been doing a huge rewatch of the show (we're on season 9 now), I thought it a good time to write a new post about the series from a more balance and mature perspective. *Ahem.*

A mad-man in a box who travels who space and time, saving civilizations while always remembering that no person is ever unimportant. From Pompeii to the Moon Landing, from creepy statues to intelligent trees and every kind of alien in-between, with appearances by Agatha Christie, Vincent Van Gogh, and Queen Victoria, the show seriously has an episode for everyone. Witty dialogue, clever endings, and a constant dialogue of morality and ethics add further appeal and depth to a show that at times can be downright campy (but in the best way).

I write so that my blood won't shrivel 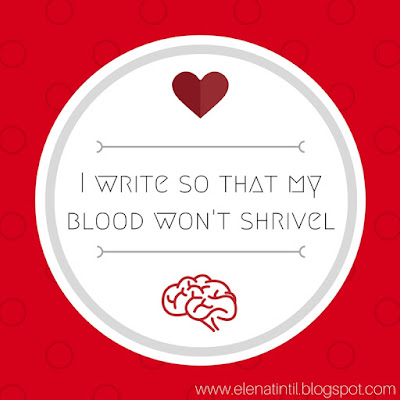 Years and years ago, (actually, almost a decade ago if I'm being honest), I used to stay up late chatting with friends online. We talked about lots of crazy things: vampires and Hogwarts and religion and fairy tales and glitter bombs. And we wrote. Lots and lots and lots.

The melding of all of this came together one night when my friend Andy and I were having a long conversation about the Dark Side and Cookies. I think we were making jokes about the light side having milk AND cookies, or oreos, or something. It was a decade ago, okay? My memory is good, but not that good. Anyhow, somehow the subject got around to writing, and why we wrote. At that point I did a LOT of my writing very late at night. Or rather, very early in the morning. I might be tired, but I couldn't sleep until I'd written something. It was a compulsion. Andy and I were discussing this compulsion and I proclaimed "I write so that my blood won't shrivel."

Andy thought this was great, so we made it into a graphic, and it became an in-joke, our own little meme. But it was more than a meme for me, it was true. Perhaps not quite literally true, but psychologically. Expressing myself through storytelling is a core part of who I am. It has been this way since before I could spell words and made my parents write my stories for me. (No joke. I used to dictate diary entries to my parents, grandparents and babysitters when I was five.)

And it remains this way. Yesterday I was so wrapped up in my current novel that I had to literally tear myself away from the computer just to keep my body from freezing up and bringing on fibro pain.

I believe that storytelling is one of the things God made me to do in this world. I thank him and I praise him and I love people and I tell stories. (And also design clothing. That's another thing that will shrivel my blood if I am separated from it too long. But this post is about the writing.)

What part of your life is that essential piece, that your soul cries out to do every day? Make time to do that.

Don't forget, I am running a giveaway this week with fun prizes like a signed copy of my novel and Parisian Mermaid jewelry. Check it out here!

Posted by Elizabeth Amy Hajek at 2:20 PM No comments:

"The Mermaid and the Unicorn" GIVEAWAY

The Giveaway is CLOSED and I am in the process of contacting the winners. Thanks to everyone who entered! 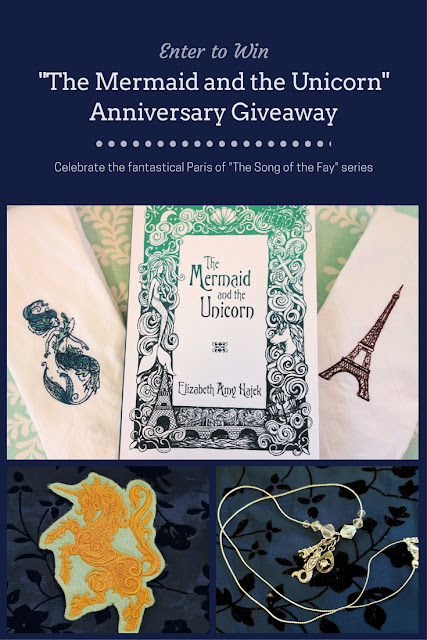 One year ago today I published my first book, and to celebrate I'm giving some themed items away to YOU!
Continue reading article »
Posted by Elizabeth Amy Hajek at 12:00 AM 12 comments: