The Other Alcott -- by Elise Hooper 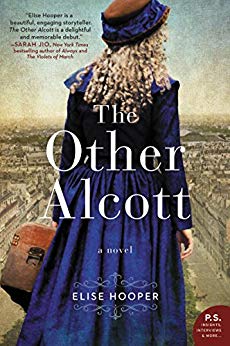 Amy March, the spoiled, vain youngest sister who steals Jo's European trip and ends up with Laurie. What if that was your legacy to the world?

Or so the general public thinks today.

Like a good many readers of "Little Women," I never gave much thought to the real figure behind Amy March. That is, I knew May Alcott was a real person who provided some inspiration for Amy, but no one wrote much about her. It was much easier to learn about Louisa and her rather unusual parents than any of the sisters.

And I did know something about the Alcotts, after all I wrote and directed a 50 minute student adaptation of "Little Women" in my late teens, the premiere of which coincided with my college course on American Literature. "Little Women" still might never rank as one of my top ten favorite novels, but I know the story and the characters very well. Meg, Jo, Beth and Amy came alive for me in a very tangible way while making that film (I played Meg), and I've continued to analyse and ponder these sisters with each new film adaptation I've been able to see.

But when I picked up Elise Hooper's engaging, well-researched novel, I was abashed to quickly discover that I knew almost nothing about May Alcott, and nearly all my assumptions were wrong.

The premise of the novel is the first sentence of this blog post--what would it be like to know that your sister portrayed you in such a fashion to the entire world? What would it be like to have everyone, as soon as they heard the name "Alcott", ask you how much of it was real, and assume that you were indeed vain and spoiled?

May had the real gumption of the Alcotts, and determined not to let her sister's fame and public judgement overshadow her life. While early reviews praised the writing of "Little Women," they were harsh on the illustrations that May contributed to the publication. Rather than let this defeat her, May decided to seriously pursue a career as a professional artist. Unlike her fictional counterpart, she left behind a future as a society wife and chose long hours of study under drawing masters rather than a cushy engagement. It would take many years of hard work and perseverance, but eventually she would craft a legacy of her own...but would that legacy be at the expense of her relationship with her sister Louisa? You'll have to read the novel to find out!

Elise Hooper does a wonderful job of bringing Alcott's world to life. She understands how to tell an engaging story in a historical setting, paying respect to real historical figures while crafting an emotional narrative. There is a long historical note at the back of the book that goes into great detail regarding the true facts behind the story.

But the best part of the book for me is how Hooper brings the world of art study alive. I know something of art myself, both from personal study and from living with an art major. I was impressed with the accuracy and depth Hooper brought to her descriptions of artistic work. Although my own art background no doubt enriched my reading, I think it would be clear and appealing to readers of any level of artistic understanding, including novices.

My only qualm would be a slight regret that the book starts post "Little Women" publication and gives very little insight into the earlier years of the Alcott family. Bronson Alcott, the patriarch, was a transcendentalist who did not believe in accepting financial remuneration for work. At one point he founded a commune that the family lived on, and later they survived only due to the patronage of admirers. Alcott family friends included Ralph Waldo Emerson and Henry David Thoreau, figures who impacted Louisa's later writing.

Indeed, this backstory is so intriguing that it would (and has) quite overwhelm May's own story, so I understand why Hooper chose to start at a later point in the timeline. However, I feel that some understanding of the Alcott family history is an important preamble to this novel, so I highly recommend at least skimming Bronson Alcott's Wikipedia page before picking up "The Other Alcott."

It's not often that I find such a great work of historical fiction that is well-written, fairly accurate, and reasonably clean. Late in the book there are a few mildly sensual scenes, but nothing too risque.

This is a perfect read to cozy up with as we head into chilly autumn. I highly recommend all fans of historical fiction, art, and/or "Little Women" go and pick up a copy today!
Posted by Elizabeth Amy Hajek at 11:59 AM No comments:

In my last post, I wrote up some reflections about my first fibromyalgia vacation. What I didn't mention, because we weren't ready to announce it, is that there was another complication I was dealing with unawares.

What I thought was just lack of hydration and vacation fatigue turned out to be the first calls for attention from our little baby, whose presence was only discovered on the last day of the vacation when we finally finally got that long awaited positive test. After so much anguish and waiting, it was beyond amazing to not only have such wonderful news, but to deliver it immediately, in person, to my parents and grandparents.

It had been my dream all year that I would be able to give my grandparents the 60th anniversary gift of their first great-grandchild. But given all the holidays and cycles that had come and gone already, I really did not think it would actually happen. So getting that test on the very last day of the celebration was absolutely shocking for me.

I still can't believe that something so beautiful actually happened.

We are currently eight weeks along, due in April, and everything is looking very good for baby. We got to see the heartbeat last week at the first ultrasound, and baby is measuring slightly ahead of schedule.

Mama is not doing so well, as I'm suffering under such extreme nausea that my mother-in-law has come up to stay with us because I pretty much can't do anything--I haven't even been posting on social media. (And yes, I've been trying a ridiculous number of remedies and almost none of them give even a hint of relief. It's unreal.) I've gone through some pretty bad nausea in my life, but it's been nothing compared to this. Food is just gross. This is definitely one of the hardest things I've gone through in my health journey, but it's a really good sign for baby, and a constant reminder that I am, most definitely, pregnant. Since we are not yet out of the first trimester, it can still be a time of anxiety, but most days I'm way too sick to have time to worry, and if I do worry, I know my extreme sickness is a very good sign for a healthy pregnancy.

The night before I got that positive test was one of the lowest points for me of our entire fertility journey. I didn't know how I'd have the strength to keep on trying. Infertility is utterly horrible and the emotional pain and strain is utterly exhausting. I still can't fully believe that our miracle has happened, that the morning after such a terrible night brought such a radical difference to everything.

In my first post about infertility, I talked about wanting God's timing more than anything. I suspect that we will see more about timing throughout this baby's life. But even in the four weeks that we've been aware of his/her existence, I've had so many reasons to see why this is the perfect time for this child to be coming.