Secondly, to kill her off not in a finale (midseason or end of season) is weirdly anticlimatic for the longest running companion of NewWho.

The other issue still at stake is Orson Pink, time traveler, who is very clearly set up to be the descendant of Clara and Danny. If this is not explained before season 9 is ended, I shall be very, very ticked off (and I know I'm not alone in this).

Clara will be gone before Christmas. That's clear. But is she already out of the picture for good? Will there be any further appearances from her in the next two episodes? She doesn't even have to come back to life - it could be the Doctor popping back into her timeline to say 'goodbye' in a different way. Or her appearing in an afterlife vision the way River did. There are a lot of ways we could still see Clara again in the finale, and it really seems that we ought to get another glimpse of her before dropping the curtain forever.

I'm weirdly not sad about the death. I mean, it is time, for sure, but her dying would have been sadder if she a) hadn't died so many times before (I was far sadder the first two times even though I knew she was coming back) or b) was leaving anyone besides the Doctor behind (Capaldi has grown on me so much this year, but his face doesn't tug at my heartstrings the way Tennant's and Smiths did). She had no family, and she was essentially going to join Danny. Which, if you think about it, is why her dying is almost less sad than her being banned from ever seeing the Doctor again. She'd made him her only reason for living - something the Doctor pointed out over and over again in season 9.

Sadness - not getting more Doctor/Baby interaction
Happiness - Torchwood reference! (Retcon)
Intrigue - More Ashildr!
Questions - What the heck is going to happen next week??? Confession dial? Where is the Doctor? Who was blackmailing Ashildr? AHHHH!

I've been sick now for 4 months and unable to work much at all during that time. We went through my costume stash and identified some that I could sell in an effort to bring in some more funds. These are mostly between 5 and 7 years old. They are clean and in good repair, but because they were made awhile ago, they are not up to my current standards, hence why they are listed for relatively low prices. The biggest issue with most of them is that there are exposed seams on many interiors, seams that I would now serge to prevent fraying. The bonus to this, however, is that this makes for fairly easy alterations if you need to take anything in! (Not all of the zippers are as smoothly inserted as I would do now, but they all work quite well!) 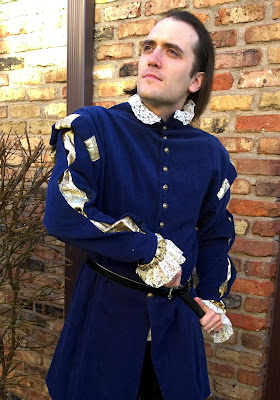 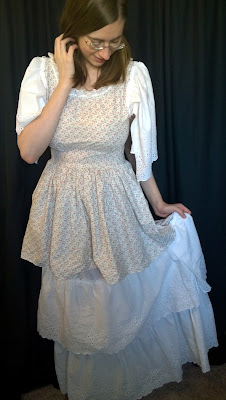 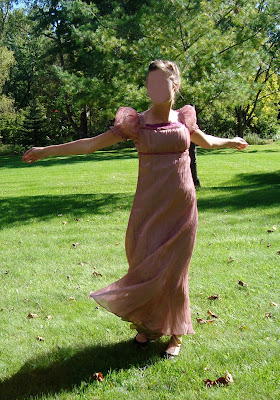 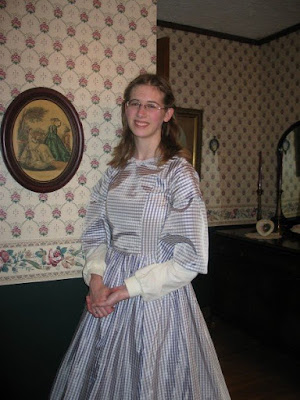 For more photos, prices, and details on purchasing, please visit the Facebook album here.
Posted by Elizabeth Amy Hajek at 2:48 PM No comments:

(Dear blog readers - I could have written this as just a Facebook post. But I wanted it to be a) easily found for future reference and b) even if you aren't one of my friends, maybe you have a chronically ill friend and reading this will let you know how much a single 'like' from them on Facebook might really mean.)

Hi Friends, it's me, Elizabeth.

Right now, for most of us, our relationship consists mostly of us "liking" each other's stuff on Facebook. I wanted to tell you that often when I'm liking your stuff, what I really want to do is write you a message, find out everything that is going on in your life, and make plans to meet for coffee.

But my health is so bad, both physically and emotionally, that even a Facebook conversation is stressful right now. I literally have one non-family non-medical person that I keep any sort of regular communication with, and there are a lot of circumstances behind that.

I feel like a bad friend. I have to remind myself that if you care about me, then you understand and you'll be waiting for me at the other end of this tunnel. You'll know that I have so little to give right now and you won't forget me or think that I don't care about you.

Facebook is something I can choose to browse when I am feeling up to it. I don't have to wait for responses, which may come at times I can't respond. I don't have to expend mental energy composing thoughts, or sharing the same depressing health news over and over. I can smile at your children's cuteness, rejoice in your graduations/engagements/etc, laugh at your jokes and follow links to your shared articles of mutual interest. I can see what your new house looks like, even though I may not be able to visit for a long time. I can hear your perspective on books or movies or tv shows. I can lift up a prayer when you ask for it (and sometimes when you don't). In other words, I can be there in the little moments I have. It's not the way I want to always be there, but it is the only way I have for now and I appreciate the chance.

Friends, I miss you. Thanks for waiting. I look forwards to the day when we can catch up in person again.
Posted by Elizabeth Amy Hajek at 3:53 PM No comments: