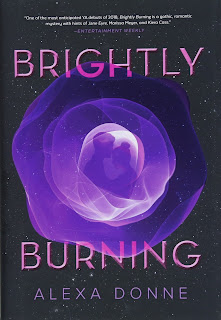 I recently ordered a bunch of books from the library that were supposed to appeal to the same crowd as Marissa Meyer's "Cinder." The first three or so I read were...okay. A couple were depressing. One ("Stitching Snow") was actually pretty good but I'd recommend only with caveats for those who have abuse trauma. And at last, "Brightly Burning" by Alexa Donne was FANTASTIC.

Honestly? I put off reading "Brightly Burning" toward the end because the premise, "Jane Eyre in Outer Space as YA" sounded like a recipe for a terrible mash-up. I've read so many Jane Austen redos that were so disappointing. And YA? I'm so tired of YA cliches...

"Brightly Burning" is really good. Not just as a retelling, but as a stand alone book. I would have enjoyed Stella Ainsley, her world, her friends, and her adventure on their own. Stella is a refreshing change from the typical YA heroine, and the cast of characters are an engaging bunch.

However, as a retelling of a beloved classic, "Brightly Burning" is stellar (pun intended!). It took all the best parts of Charlotte Bronte's classic, mixed them up, added a few twists and turns, and presented them as a brand new story. Stella is a pitch perfect Jane, and Hugo Fairfax is a surprisingly well done Rochester. And I really, really did not think that a 19-year-old guy in a YA novel could possibly compare to the original Rochester...but he actually does. And yes, the book is appropriate for a YA audience. The changes that Donne made to transition her characters work well, staying true to the spirit of the original while adjusting to accommodate a younger hero.

Perhaps most delightful of all is that this book holds plenty of surprises even for old fans of Jane Eyre. Even though I was able to quickly guess the biggest change, I could not anticipate how everything was going to roll out and was genuinely on the edge of my seat and unable to put the book down!
Posted by Elizabeth Amy Hajek at 5:20 PM No comments: