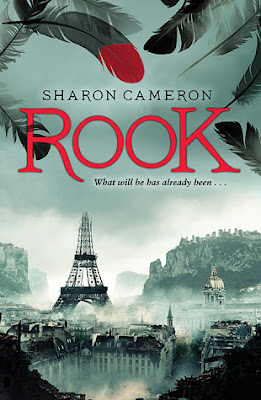 This rhyme doesn't appear in "Rook" by Sharon Cameron, but it ought to. For this tale of a young girl seeking to rescue the unjustly condemned of of a dystopian future Paris is a clear homage to "The Scarlet Pimpernel" if not quite a retelling.

In this version, however, the role of the titular masked rescuer is played by a young woman (it's YA fiction, what else do you expect?). Sophia Bellamy, English gentlewoman by day, Red Rook by night, is devoted to both her family and the endangered citizens of France. Whether it takes a sword or a marriage proposal, she'll do whatever it takes to ensure that no one is left to prison--or worse. Yet she soon discovers that she is not the only one wearing a mask...

Initially, I picked this book off the library shelf because I confused it with another book of similar title. However, the moment I read the jacket blurb, I was hooked. I'm an old fan of "The Scarlet Pimpernel", always intrigued by things French and British, and fascinated by anything that lets me view history in a new light. In Cameron, I found an author with the same interest.

Although the world of "Rook" could be loosely cataloged as dystopian, this future world is not your usual sci-fi fare. After the shifting of earth's magnetic poles, all technology fails, leading many governments to declare machines 'evil' and require their citizens become self-sufficient. In consequence, the far off future of the Sunken City is no so very different than the 18th century of Baroness Orczy's tale of adventure and romance. And yet, set in a semi-wasteland where plastic artifacts like 'diet' bottles are highly prized, humanity has not changed so very much.

I appreciated the set-up for a future that mirrors the past, but was even more delighted to find the writing and plot well above your average YA book. There is a love triangle, sort of, but the real love story in the book manages to be sizzling, sweet, and sincere. Worthy to follow in Orczy's footsteps, in my very humble opinion.

So if you're looking for another Parisian adventure to tide you over until my next book is released, you may just find this worth checking out.

It's finally time for me to review "Star Wars: The Last Jedi." My thoughts may not be what you expect, but there will be spoilers. You've been warned.

You'd think that, being chronically ill, watching movies would be one good way of filling the time. And that is partially true (I'm superb at keeping up with TV shows!) However, due to extreme sensitivities, I cannot go to the movie theater without getting a migraine.  So our household tends to lag behind when it comes to seeing the latest releases. This has put a damper on my enthusiasm for film consumption.

However, there are some films that are still really hard to have to wait for. Most of the Marvel films. Some special ones like "Beauty and the Beast." And Star Wars. Always Star Wars.

My husband works for a company that will typically rent out a theater on opening day of a Star Wars film and all the employees go watch it with their families. My husband comes home and we read the spoilers together. This sounds pretty sad, and it has been, but this time, I'm really glad that it worked out this way. Because while a large portion of geekdom sat on the edge of their seats waiting for certain revelations while watching "Star Wars: The Last Jedi," I already know what was (or more importantly, wasn't) going to be revealed.

Let me tell you, based on the uproar on the internet, I believe "Star Wars: The Last Jedi" is a much more enjoyable film when you can go into it without any expectations. Indeed, it is a beautiful film, easily the most gorgeous and visually striking of any film in the Star Wars saga thus far. It also is the most grounded, stepping beyond the realm of fairy tales and myth and into a landscape of flora and fauna that felt real and solid in a way that I have never before experienced Star Wars.

I really appreciated the many homages in the film. Whereas "The Force Awakens" was a heavy-handed retread of "A New Hope", "The Last Jedi" paid more subtle tribute to "The Empire Strikes Back" (and other films), by taking iconic set-ups and tropes from the earlier films and then reworking them in a fresh an innovative way. For one example: I loved how Crait looked like it was going to be another snow planet, but then was revealed to be salt, with each thrust of battle scraping away the white veneer to reveal the scarlet beneath.

This is not to say that "Star Wars: The Last Jedi" is a perfect film. It is easily the busiest of the Star Wars films, with too many subplots and perhaps more than the typical number of head-scratching logic holes.. Yet I can see how every one of those character arcs was important for the story that Rian Johnson decided to tell, and I'm not sure which of them I would have cut.

This is a personal opinion, you understand. For instance, I have heard that many people didn't like Canto Bight, but I thought it did a great job of finally showing the audience a) the evilness of the empire on a personal scale and b) the range of gray among the citizens of the galaxy. The ride of the Fathiers brought a moment of true joy into an otherwise fairly dark film that was greatly needed. It reminded us of what our heroes are fighting for.

I know people argue about Poe, and Poe's arc, and Haldo's secrecy, and who was right--and really, it all makes a very interesting conversation, doesn't it? Rebels, by their nature, are breaking the rules. But what rules do we still need in order to actually function? (Some, apparently, since breaking radio silence was disastrous...) To cut just Haldo as a character is perhaps the one edit that would interfere with the overall film the least, and yet, you'd lose that magnificent sacrifice scene. Because Leia couldn't do it, she hadn't reunited with Luke yet, (and during filming, of course, they expected Carrie Fisher to be around to carry the biggest legacy role in IX). And if Poe had done it--oh how fans would have cried. Plus, you know Harrison Ford probably would have griped about it. Y'know. They didn't let Han go off young and heroically, so why should Poe get that kind of juicy end?

I loved all of Luke's scenes, this sense of reality and the simple life of a former legend. Everyone kept talking about how awkward the milk scene was, but gosh, when I actually saw it, it was just so short! And I just thought, "Well, Luke started off with blue milk, his final film should have blue milk too, right?" But mostly I loved the mix of grounded humor and conflicted conviction that made up old Luke. I could truly buy this as the Luke of the original trilogy, whiny farmboy to Jedi hero to disillusioned old warrior. He felt authentic to me.

And Rey and Kylo Ren -- their dynamic is the core of this entire trilogy, how could a minute of it be cut? That had to stay. (Whether they are going to fall in love or not, as I discussed after watching "The Force Awakens", I don't know. Kylo is definitely obsessed with Rey. Rey doesn't seem romantically interested in anyone. The only person I saw a spark of chemistry with was Poe, but Poe has chemistry with everyone, so that doesn't really count.)

I loved it all. And I can tell the filmmakers tried very, very hard to cut it tightly together, to keep all of the really good stuff and trim every bit of excess fat that they could. Unfortunate, for several scenes could have used just a little more time to breathe, to let us reflect...yet the running time couldn't spare it. Those seconds add up.

So it's not a perfect script, which means it can't be a perfect movie, right? And yet, I think "Star Wars: The Last Jedi" is the perfect film for this slot in the saga. It says, subtextually and blatantly, "the myth is gone. The heroes you adored are just people, and they are gone too. But that's okay. There are more people coming, out of which new myths are being born...and you already love them too. Trust us, and keep watching."

Some Star Wars movies, like "A New Hope" and "The Force Awakens" are funny and entertaining and make us believe we can do great things while laughing through them. Other Star Wars movies, like "The Empire Strikes Back" and "The Last Jedi" subvert expectations, reveal uncomfortable truths, and make us ponder new ways of seeing the world. "The Last Jedi" may not be everyone's cup of tea, but I am personally quite happy with it as the eighth installment in the Star Wars saga.

Now here's hoping that the yet untitled Star Wars: IX strikes a good balance between the different strengths of VII and VIII and delivers the strongest film yet!