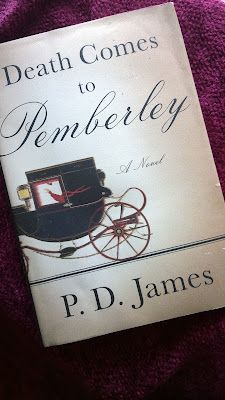 A quick look at my blog header should indicate that I am a Jane Austen fan. However, I'm not a purist who decries anyone who writes a 'sequel' to Austen -- only those who do it badly!

My first introduction to "Death Comes to Pemberley" was via the PBS special, and I found it dull and depressing. Hardly a recommendation to pick up the book! However, two weeks ago I found a copy in the clearance section of the used bookstore, and I was desperate for more reading material, so I said, "Why not?"

Turns out, the book is way better than the TV movie. (Surprise surprise.)

"Death Comes to Pemberley" is a sequel to "Pride and Prejudice" framed as a police procedural. In it, Darcy and Elizabeth are swept up in a murder mystery. Whereas the Mr. and Mrs. Darcy mysteries gave a Nick-and-Nora banter to the Darcy's, this novel takes a slightly graver view. In doing so, it revisits a few aspects of the original novel that I never looked at too closely before, but nicely discusses and excuses the potential weaknesses it examines.

Most of the characters of the original novel receive at least cameos or mentions here (as do a few characters from other Austen novels), and I felt were sketched with appropriate justice. James has a solid understanding of Austen culture. The novel begins with a recap of "Pride and Prejudice" as it would have appeared to the populace of Meryton, which is both amusing and useful to the reader who hasn't picked up the original novel in awhile.

My single qualm with the book is that it features slightly less Elizabeth than I would prefer. However, it is a more balanced presentation than the TV movie (Which was even more Darcy heavy) and did a better job of making the other players more intriguing. Indeed, in reading the novel and seeing how much of it depends on inner thought life, I realized exactly why it was a difficult novel to adapt adequately to screen. The structure of the story does not lend itself to making the transition to screen in a satisfying way.

The mystery itself is perhaps not overly original, but it is interesting to see a murder investigation framed within the society and technology of the early 1800s.

James is not only a writer, but a professional in the world of crime solving, something which quickly becomes clear to the reader. I actually found myself thinking several times that I ought to get my husband to read the book. Although it will be enjoyed by female readers (and James is a woman, though using obscuring initials), there is definitely a feel to the novel that I think would appeal to a masculine reader, especially one who enjoys mysteries.

Conclusion: Skip the TV movie - or if you already saw it, push aside your recollections of it. Either way, pick up the novel. It's well worth the read, whether you're a die hard Austenite, a mystery junkie, or a lover of good period fiction.

My Blessings You Do Not See

A friend of mine told me that he once asked a priest if it was difficult to hear the confessions of all the awful things people did.

"No," the priest replied. "It's hard to hear of all the good things they do, and not be able to tell anyone."

And, the thing is, this injunction not to brag about good deeds goes beyond the silence of the confessional. Matthew 6:3-4 says "But when you give to the needy, do not let your left hand know what your right hand is doing, so that your giving may be in secret. And your Father who sees in secret will reward you."

Being ill has put a lot of strain on our family, in many ways, but we've been very blessed by a number of people who have given generously of their resources to us. I find myself really sympathizing with the priest -- I want the world to know how amazing these people in my life are! But at the same time, I know many of the people giving to us would not want their giving to be known -- even those with other belief systems are still doing it out of love, not a desire for recognition!

We live in a world that is very driven by outward appearances. Social media allows everyone to create a very public persona, and most people are aware that a lot of the messiness of life is deliberately hidden from these spotlights. But I think we forget how much of the goodness is hidden as well (or, at least in Christian doctrine, is supposed to be hidden). I love seeing stories about people helping out others, and I think it's encouraging to realize that there is far more generosity going on in the shadows than we'll ever know about in this life.
Posted by Elizabeth Amy Hajek at 11:44 AM 1 comment:

An Author Learning from RPGs

One of the greatest challenges for authors is developing unique characters that speak with their own voice. Observation of the world is tremendously important for this, but recently I've realized how much I'm benefitting from another element in my life - my weekly role-playing game.

I've written extensively on the benefits of roleplaying games (rpgs) here, specifically in respects to social interaction and personal development. Lately, however, I've been observing how much it is enriching me as an author.

I strongly believe that reading other great authors is the best form of 'studying' a writer can do. However, the one weakness of this in regards to character development is that (most of the time) every character in a book is written by the same person. No matter how hard an author works at their craft, ultimately each character's motivations are being developed by the same mind.

In an rpg group, however, while you have a narrative story run by the game master, each character is developed and played by a different player. This adds an element of unpredictability and surprise that few other mediums offer. (Stage and screen have some of this, with actors contributing their thoughts, but ultimately the story is strongly run by the screenwriter and director).

The other benefit of the rpg group is that you can discuss character motivation and actions -- not only do I get to observe how different people play different characters reacting, but we also discuss (sometimes) why they did so. This has been a tremendous window into human nature.

A week ago, my character majorly ticked off another character in the game. Out of game, we all agreed on the action ahead of time because it would be so disruptive, and everyone thought it was an awesome narrative choice. In game, however, it was INTENSE. And then we had to wait a week for the real big drawn out fight to happen! I had several days to think through how my character would react... I knew, if I were writing the scene, how it would go. What I didn't know was how the other player was going to have their character react! It ended up being little like I expected, but tremendously true to the character as developed. As a result, I found myself re-analyzing (again) how different people of different personality types react to the same situation, and am thankful that the RPG group gives me the constant reminder of this!

Anyhow, it was a good incentive to re-dedicate myself to really developing distinct, believable characters.
Posted by Elizabeth Amy Hajek at 10:58 AM No comments: 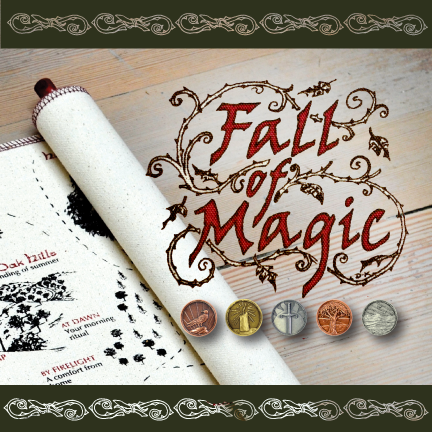 Last night my husband and I had a game night with some friends, and we got to try out a storytelling game called "Fall of Magic." It was so fun, that I decided it was time to write up my first game review on the blog!

Game play involves a map that you unwind over the course of the story. Step one is putting together your character from a list of name and occupation/title prompts, followed by a quest with the Magnus to save the dying magic of the kingdom. Each nicely illustrated stop on the map has different scene prompts, and each person gets a chance to set a scene at the location. The rules are simple and contained in a small booklet, and there are only a few tokens and one die. There is no 'winning' or 'loosing', just having fun! You can play completely cooperatively, or develop characters with conflicting agendas...it's up to you!

However, it's a beautifully rich set-up, and we found that two hours sped quickly by as we journeyed on our adventure to save magic! The game is structured just enough to let things run smoothly and form a loose framework for one's imagination to run wild. You can 'act' out your scenes, or narrate them as you choose. A great game for those who love writing, improv, or role-playing! Works as either a one-day game, or an on-going group activity.

While we got to play with the snazzy cloth scroll and metal tokens that our friend brought, there is also a much cheaper digital version for purchase.
Posted by Elizabeth Amy Hajek at 4:22 PM No comments:

I woke up this morning to the news that one of my favorite mutants, Lorna Dane aka Polaris, is finally making into a live-action story, via Fox's new X-Men tv show.

Lorna is one of those mutants that the average Joe won't know, and yet has a major connection to one of the most famous mutants of all--she is Magneto's biological daughter. Half-sister to the more well-known Quicksilver and Scarlet Witch, Lorna was raised by adoptive parents and her mutant identity was revealed at a rather later age than normal in the X-Men world. (There's a good reason for this, and a lot of other crazy story stuff, which you can read about over here.)

Although now canonically Magneto's daughter, this fact was disputed, refuted, proved, twisted, and proved again over the course of many years of comic writing. In the meantime, Lorna maintained a very long relationship with Alex Summers (Cyclop's younger brother), served on various hero teams, and even was involved in an intergalactic war, alongside the Inhumans and the Guardians.

(It's a bit crazy to me that I can now mention the Inhumans and most of my blog readers will recognize the term. The Shi'ar remain obscure, except for those who grew up on the old TV show.)

Also, once upon a time, I cosplayed Lorna. 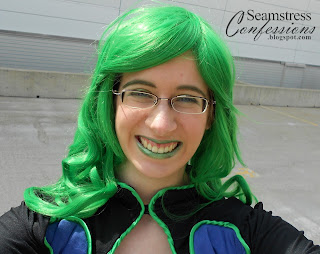 Anyhow, she is my only favorite mutant to not yet be portrayed in live action. Granted, there are a lot of reasons to be worried about this, but my line has always been that the X-Men work far, far better as a TV series than a movie, and therefore I feel hopeful that we might get a better incarnation of Lorna than we did of my other favorites, Rogue and Gambit.

There are a lot of ways this could go wrong, but today I'm choosing to be excited and hopeful, because I like to live positively.

For more X-Men, visit my musings over at the Geek Portal.
Posted by Elizabeth Amy Hajek at 1:38 PM No comments: