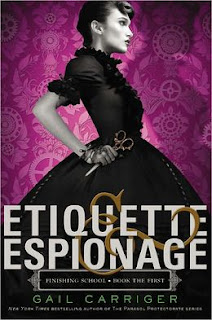 Imagine that you're a 14-year-old girl with an adventurous streak who has been shipped off to finishing school, only to find that said establishment is actually a giant dirigible school for training young ladies in the art of espionage. Oh yes, and it's Victorian England and there are werewolves and vampires running around (the real things, no disco ball Edwards!) - they're even some of the teachers! And then of course there are the sky pirates searching for a mysteriously missing 'prototype' that another student might be hiding...

This is the premise behind Gail Carriger's latest novel, "Etiquette and Espionage." Although I've greatly enjoyed her adult series, (The Parasol Protectorate), I've been reluctant to review them here as they are definitely adult and contain some sex scenes and quite a bit of innuendo. "Etiquette and Espionage," however, is YA fiction and I feel is appropriate for the 10 and up crowd. That doesn't mean, however, that older readers won't also enjoy it! And there are crossover characters between the two series, so that adult readers will have a reason to pick this one up as well (and younger ones will have treats waiting in store sometime in the future).

Carriger describes her brand of steampunk as "teapunk" which is a clever way of saying she uses the settings and tropes of steampunk, but the writing style and satire of the comedy of manners writers such as P.G. Wodehouse, Jane Austen, and Oscar Wilde. Although her humor is somewhat more evident in "The Parasol Protectorate", it nonetheless appears here as well, making "Etiquette and Espionage" a fun read. And though it features a female heroine, there are a couple of young lads along for the adventure that should make this book enjoyable for both genders to read.

Not to mention that fans of traditional vampire and werewolf lore will appreciate Carriger's traditional interpretation of these supernatural curses, although she isn't afraid to illustrate that sometimes these creatures take themselves a little too seriously! There are also plenty of clockwork apparatuses scattered throughout, both in machines and automatons, not to mention one adorable little steampowered messenger puppy!

Sounds like fun read! I'll have to check it out...I love all things steampunk as well as P.G. Wodehouse! :)