"The Historian" by Elizabeth Kostova 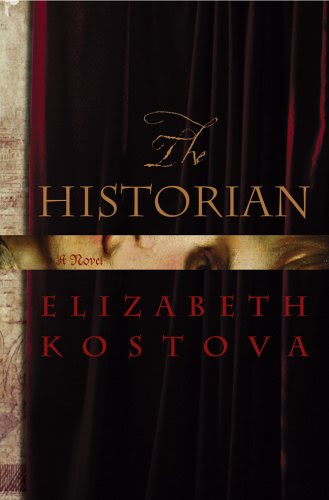 "Hmm," I am sure you are thinking. "For someone who claims not to like vampire novels, there seem to be quite a few articles about them stacking up on this blog."

To that I can only shrug. And then say that it's a pop culture phenomenon that cannot be ignored.

But that would only be half the story. After reading Twilight, I felt a bit braver about venturing into the realm of vampire lit. I also knew from my own peeks and referances of a trusted friend that it was fairly tame as far as vampire novels go and wasn't overly creepy. Also it appeared to be well written. And as I think I've made obvious, I heartily appreciate a well-written novel.

"The Historian" by Elizabeth Kostova is the story of three generations that discover the continued existane of Vlad Dracula "The Impaler." Through the appearance of a mysterious book with a haunting woodcut of a dragon, each generation sets off on a quest to find the tomb of the old Wallachian prince and discover the truth once and for all.

It's a story of historians, of academics, of books and ancient languages, of Monestaries and Istanbul, of secret guardians and Budapest. It's a story of forbidden loves, of family secrets, of mysterious disappearances, and the shadow of evil.

And for the most part it's a decently tame vampire novel. Considering that it is an adult novel, there is nothing particulary graphic, and anything that is semi-described (gore or sex) is done with such taste and class that I think it would be suitable for the older teen. It is academic enough in nature that it won't capture the same audience as "Twilight" which is a pity for it is both better written and far truer to the original and evil nature of the vampire. No sparkly Edwards here.

It is obviously an extremely well researched novel, and though fact is mixed with fiction, introduces the reader to the unrest of Eastern Europe in the 1970's, to the cultural customs of Old Romania, and to the history of Constantinople/Istanbul.

The characters are fairly realistic and compelling, although it is a bit jarring to realize that the hero of the novel is not the narrarator herself, but rather her father. However, in retrospect, this needn't be a weakness. It is a continuation of the tradition of "To Kill a Mockingbird" and does it perhaps rather better.

I think Kostova is just short of greatness. I think "The Historian" comes very close to being a modern classic. It falls short because it has just one too many stories and tries to cram a bit too much into the last thirty pages. However, as a book, it is not a failure and for the reader of vampire lit or historical fiction I think it will prove an entertaining and worthwhile read.
Posted by Elenatintil at 9:55 AM

I agree heartily with your comments, and well said. I of course, loved the fact that it was set mostly in Eastern Europe (of which I am thoroughly enamored) and loved the historical clues and mystery woven throughout the novel. It wasn't completely satisfying to me, but it was definitely a good read, and I don't say that very often.

I just did a paper about Vlad the Impaler for my AP class.

I had to laugh when I read this, because somebody just told me that I must read it as soon as I finish with Dracula! I definately will now!

Elenatintil,
One of the John Paul 2 High team members has a blog, and when he posted this vampire cartoon, I had to share it with you.

This guy Ryan (check out his other blogs) is the closest thing I know of to a Catholic Seinfeld. Enjoy!

Mama dear, you have a wonderful taste in books... after reading your review of this book (which I'd never heard about before) I got it out of the library just yesterday, am nearly half-way through it, and absolutely love it!

Lanta - thank you! I'm glad you enjoy it! We should talk when you finish it!