As "The Mermaid and the Unicorn" reaches the end of the initial writing phase, some e-mails have been exchanged about the cover. This has made me think a lot about book covers in general, but particularly those with fantasy elements and geared towards a YA market. Today I was over reading an article on Gail Carriger's blog and just had to take a moment to stop and appreciate the covers her books were given: 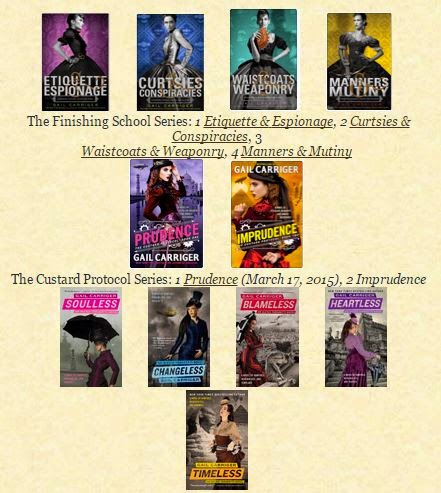 Here we've got eleven different covers spanning three series in the same universe. Each one has a distinctive and lovely them, and yet they are thematically harmonized. I love them. And I love them even more observing them grouped together like this. It's like a beautiful bouquet of books.

(Even though, yes, as a costume it drives me a little nuts that they used the same dress on "Changless" and "Blameless", and then another dress for both "Heartless" and "Timeless" and just colored them differently to make it look like they were different. Ah, well, period costumes don't come cheap.)

In case you are intrigued, I've already reviewed book 1 of her YA series (The Finishing School series) "Etiquette and Espionage." Book 1 of her newest series, (The Custard Protocol) "Prudence" is being released in eleven days, so I have yet to ascertain what audience it is suitable for.

Her original series (The Parasol Protectorate) is directed towards an adult audience and there is some sexual content and innuendo in the books, especially the first one, which is why I haven't formally reviewed it here. I adore the series and have read it multiple times, I just don't want anyone too young picking it up because of my inevitably enthusiastic review. However, if you're in the 18+ crowd and you're not phased by such material, the kindle versions are on sale right now.
Posted by Elizabeth Amy Hajek at 3:20 PM