"Rebel Queen" by Michelle Moran (My review at last!) 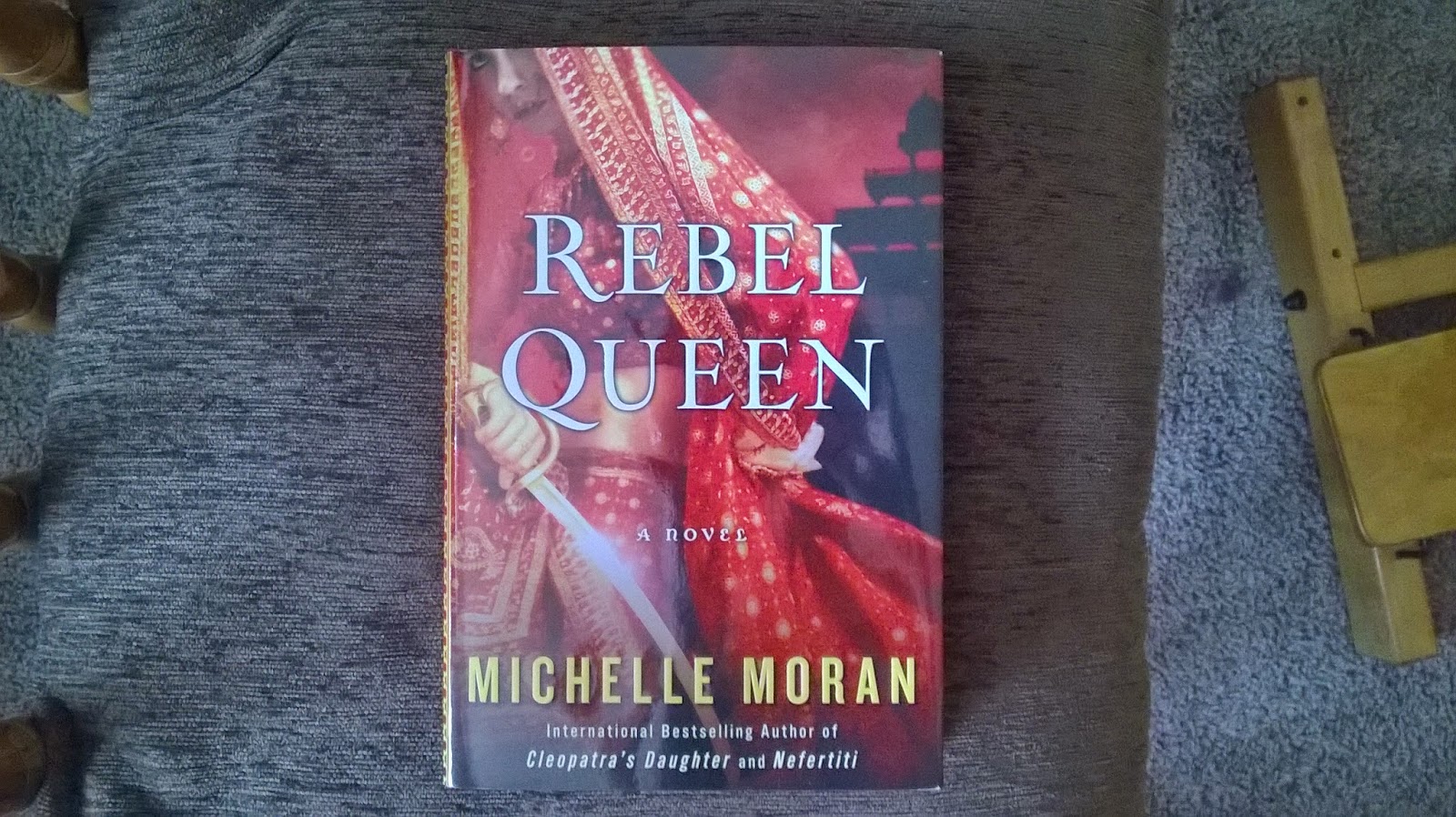 So instead of the shiny Amazon thumbnail, you're getting a photo of my own copy of "Rebel Queen" (proof in my spinning wheel pedal on the side there), because I am still just so excited that I was given a review copy.

(Don't worry, I'm still going to give you a completely honest review. Just needed to be clear about the review status up front.)

I devoured about half the book in one night, because I was up with a nasty earache and needed a distraction. It worked excellently.

Let me tell you what this book is about. There's this girl named Sita, who lives in India during the mid 1800's when it was still under control of the East India Trading Company. Her mother dies and her grandmother wants to sell her as a temple prostitute to raise dowry money for her baby sister because girls are basically worthless in that time and place. Sita's dad, however, says 'HECK NO, I'm gonna raise my girl to be one of the queen's badass bodyguard ladies!' Everyone thinks he's crazy because there are only 10 of these bodyguards and hundreds of girls compete to get the place, but Sita's dad is an educated soldier and he's got his other talented soldier buddy helping them out and they train Sita how to fight with every weapon and how to read English and appreciate Shakespeare.

Of course when the time finally comes, Sita totally blows the competition out of the water and is whisked off to become one of the elite female bodyguards of Rani Lakshmi of Jhansi.

Now Rani Lakshmi is known as India's Joan of Arc, or the "Rebel Queen" of the book title, so it's no spoiler to say that Sita gets caught up in the rani's rebellion, including being part of the rani's delegation to Queen Victoria to plead for aid. (It was pretty funny to compare British and Indian ideas of modesty - the Indian's are horrified by how much bosom the English display, and the English are scandalized by the bare tummies of the Indian women).

The book is extremely tightly written - I have never seen such an engaging story manage to explain so many culture differences per page without once growing boring or confusing. I was so absorbed in Sita's story that the words and customs just soaked in without me feeling like I was 'learning'. It was great. The characters are also very awesome and well constructed, from Sita's family to the rani, her husband the raj, and the 10 women of the bodyguard.

I was, however, a little disappointed in two things. #1, the cover blurb is misleading. The rani does not raise two armies, "one male, one female." I was expecting the book to be about her recruiting hundreds of Indian women to fight the British. This doesn't happen. The rani does know combat, and she does train with her 10 bodyguards, but personally I wouldn't consider them an 'army.' This is pretty sad, since it is totally a publicity gimmick by the publisher and isn't fair to the excellent story Moran has written. So when you go in, discount the blurb entirely and you'll enjoy the book much better!

#2, the only actual problem with the story is in the climax, which strangely enough separates Sita from the rani and sends her back to her family at just the point when you are most invested in sticking with the rani. I'm not entirely sure why this choice was made. Sita did have ends to tie up there, but it felt like a letdown as a reader. As far as I can tell, Sita is a fictional character, so there isn't any historical reason why this happened.

Despite that, the rest of the book is so strong, that I'd recommend it heartily anyhow. I will point out that it is set against a rebellion with a lot of atrocities, which the book describes in (appropriate, not gratuitous) detail. If reading about innocent women and children coming to pretty horrific ends is a trigger for you, you might want to skip this one, or at least read the last quarter of the book warily. Personally, it was hard to read, but since I knew little about this part of Indian history, I appreciated understanding the full scope of what happened.

Final verdict? I will certainly read this book again and - apart from the climax - it might even be Moran's strongest book yet.
Posted by Elizabeth Amy Hajek at 11:10 AM