So My Husband Has Dreadlocks 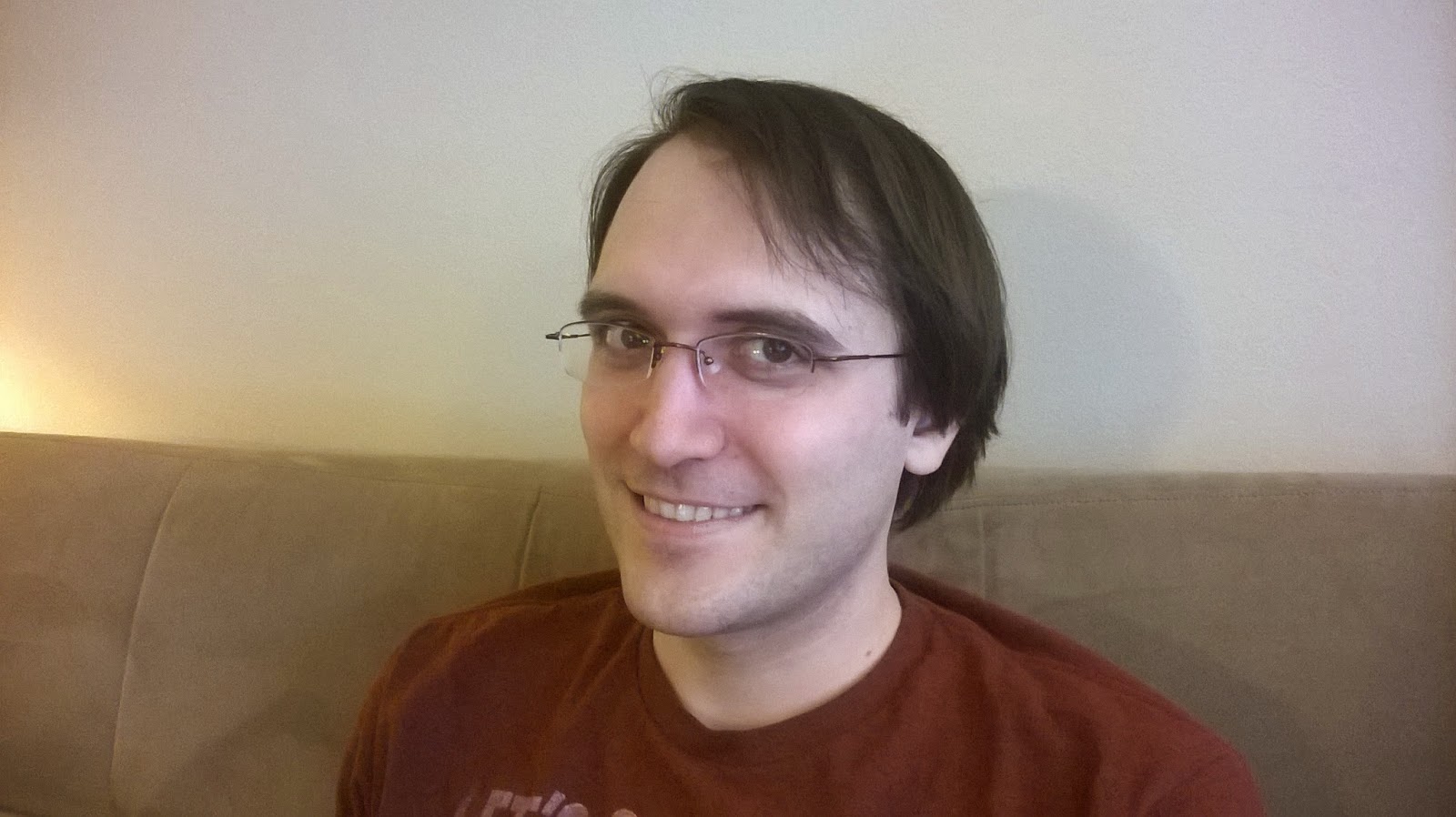 So, this is my handsome husband, Nathan. He has lovely thick dark hair that I adore. And he has wanted dreadlocks since high school.


Despite being a fan of Regina Doman's "The Shadow of the Bear" and its iconic dreadlocked hero (who, ironically, is similar in temperament to my husband!), I'm not actually a fan of dreads on white guys. I did not want my husbands silky locks to go away.

But every time we saw dreadlocks, or someone mentioned them, Nathan would sigh wistfully and say "Man, dreadlocks are SO COOL." And he'd list all the reasons why he'd take excellent care of them (and I know he would).

And then my mother said "If he really wants them so much, why don't you let him have them and get it out of his system?"

And then Nathan would mention that dreads would be totally accepted at his work, and it'd help him have something distinguishing and not so 'boy scout.' (Hey, maybe Scott Summers needs dreadlocks!)

And then... and then... I started thinking of how much Nathan has sacrificed to take care of me and my health issues, and we were coming up on our one year anniversary and I wanted to give him something really really meaningful... 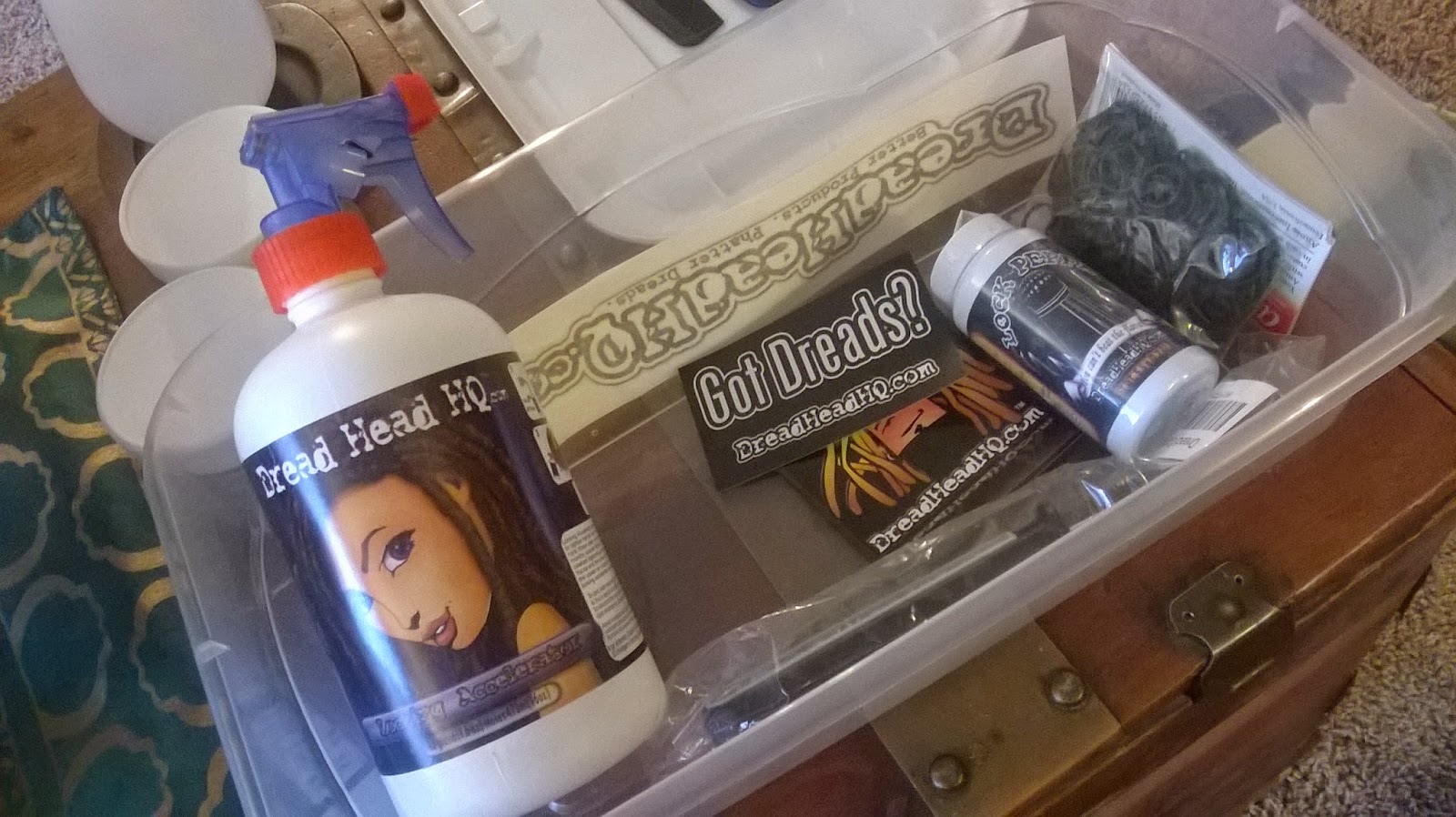 So I researched dreadlock kits and got what looked like the best (and it turned out later that it was the same company Nathan had always intended to get dreadlock supplies from if he actually did them) and gave them to him on his anniversary and he was SO EXCITED. 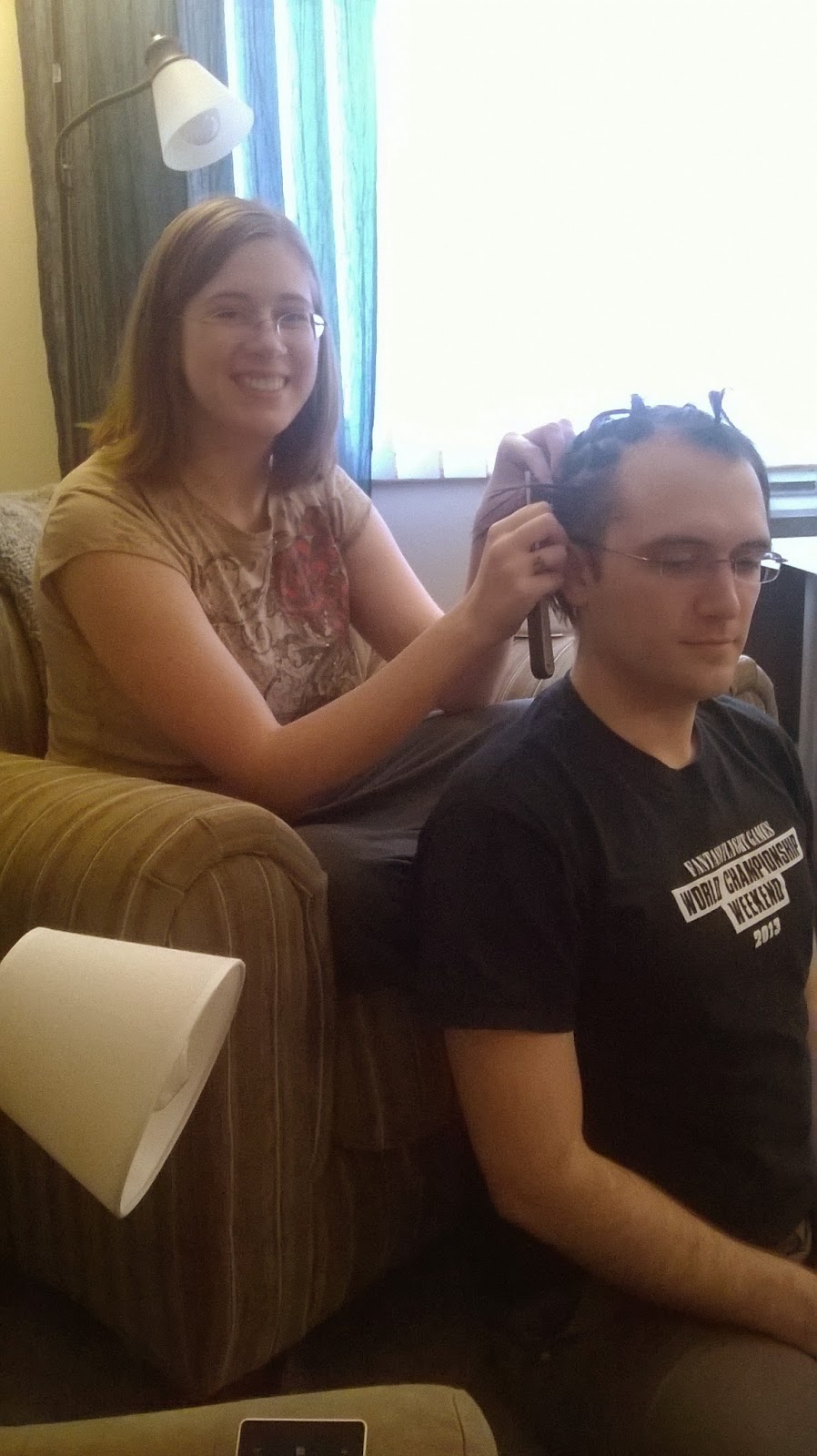 So. We let his hair grow out to the minimum necessary length and set up a dread party with some of our friends. 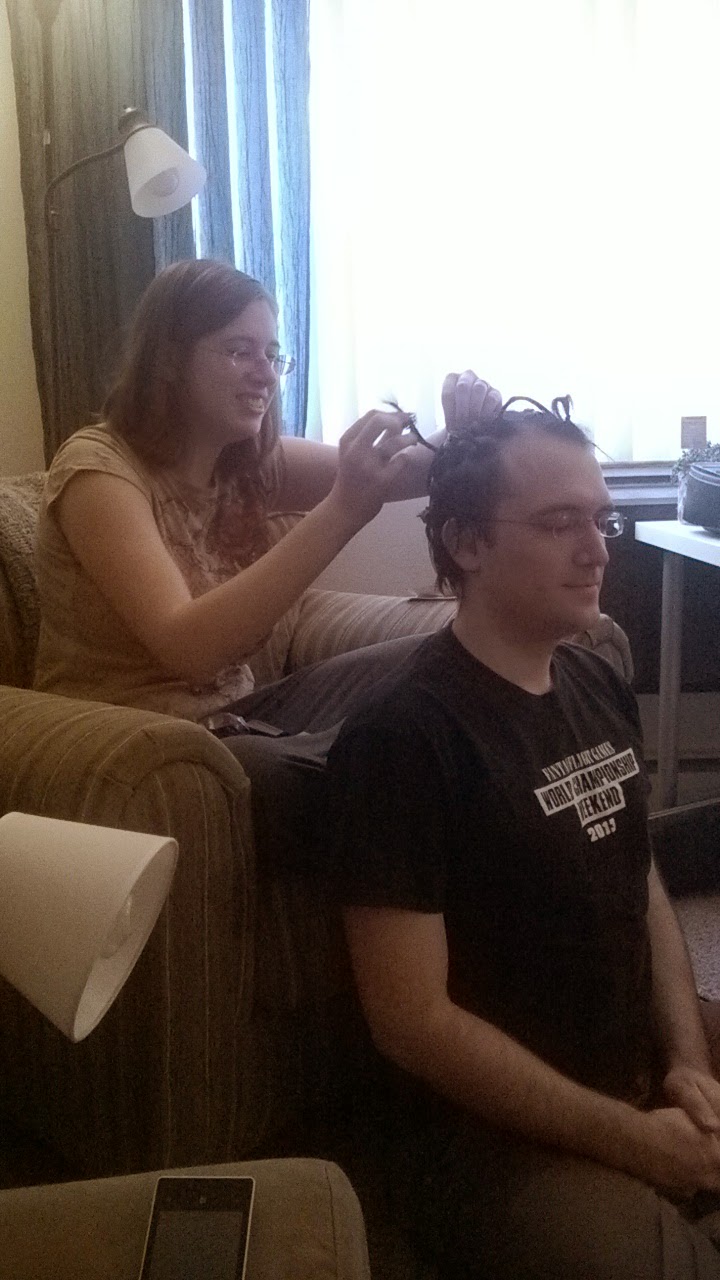 And then Nathan sat patiently for 7 hours while we put them in. 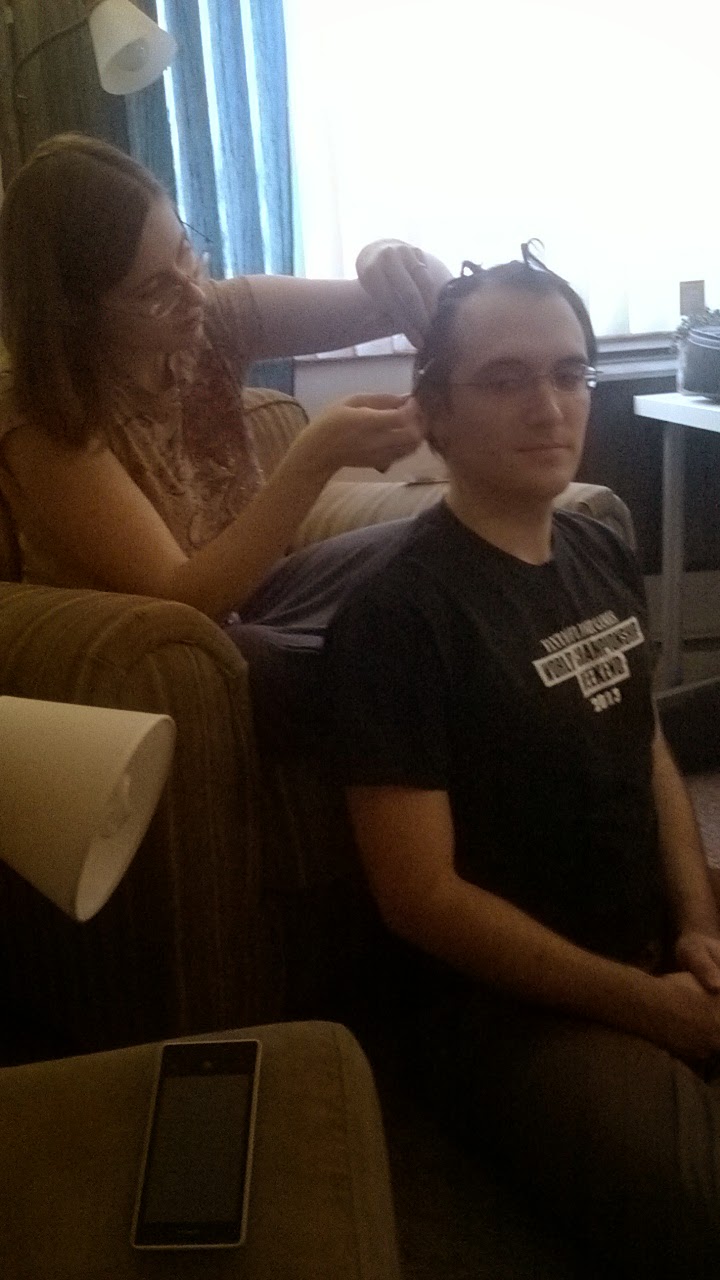 Even with short hair, dreads are a LOT of work! 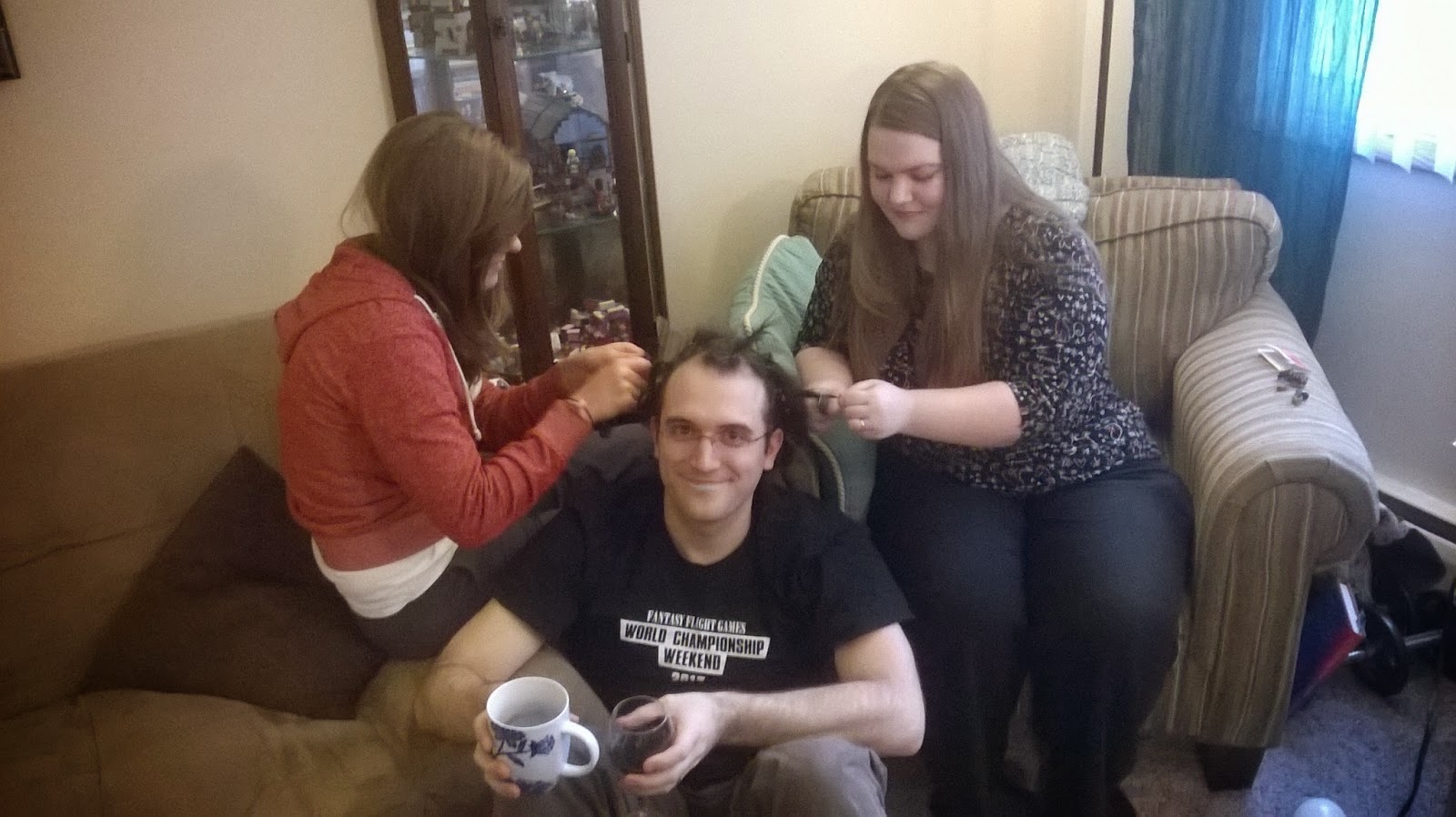 My sister and our friends Janny and Anthony all gave up valuable time and took on sore fingers and shoulders to help make Nathan's dream possible. 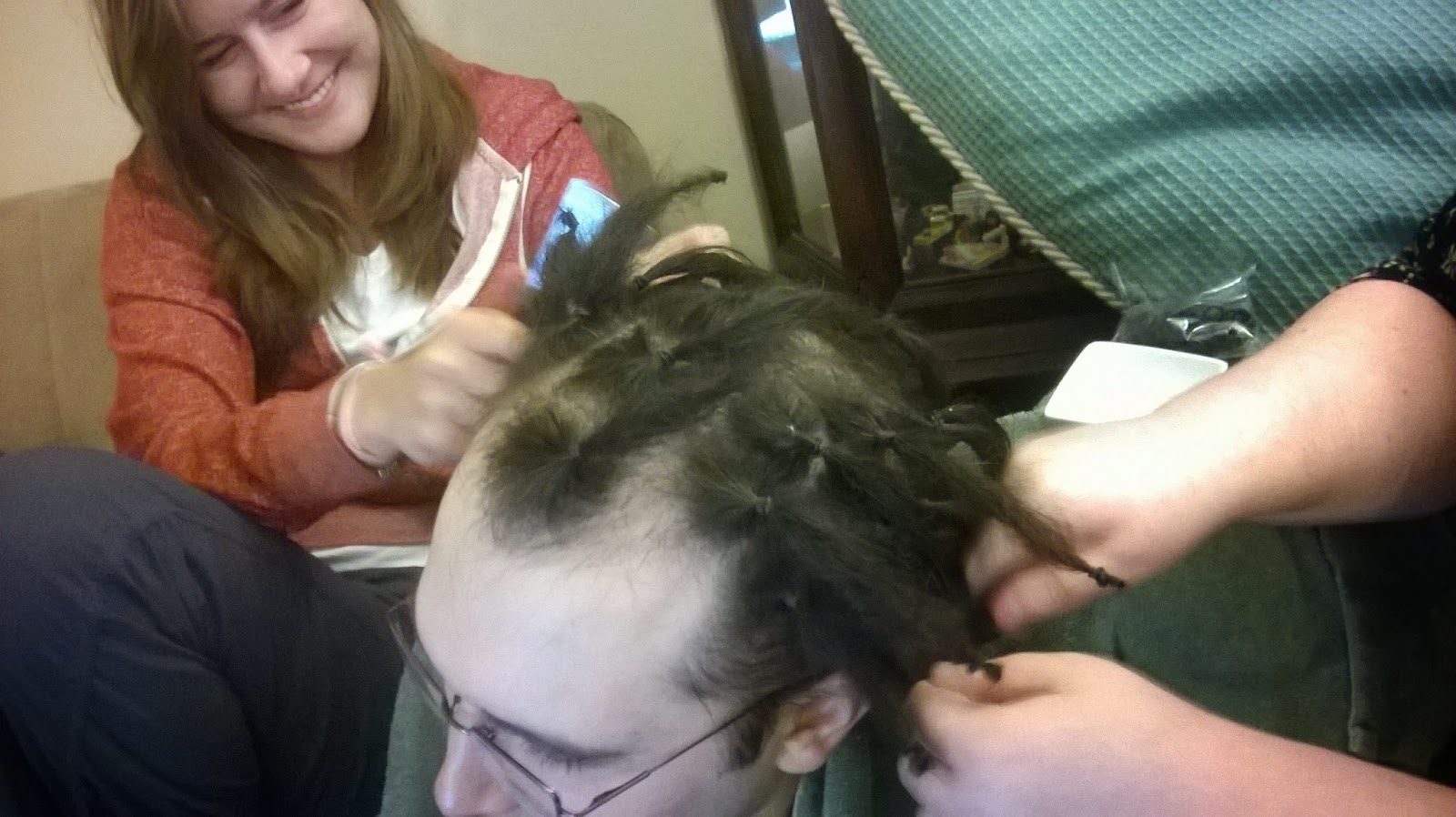 We sectioned his hair into about 45 little ponytails, and then backcombed for hours to knot the hair. 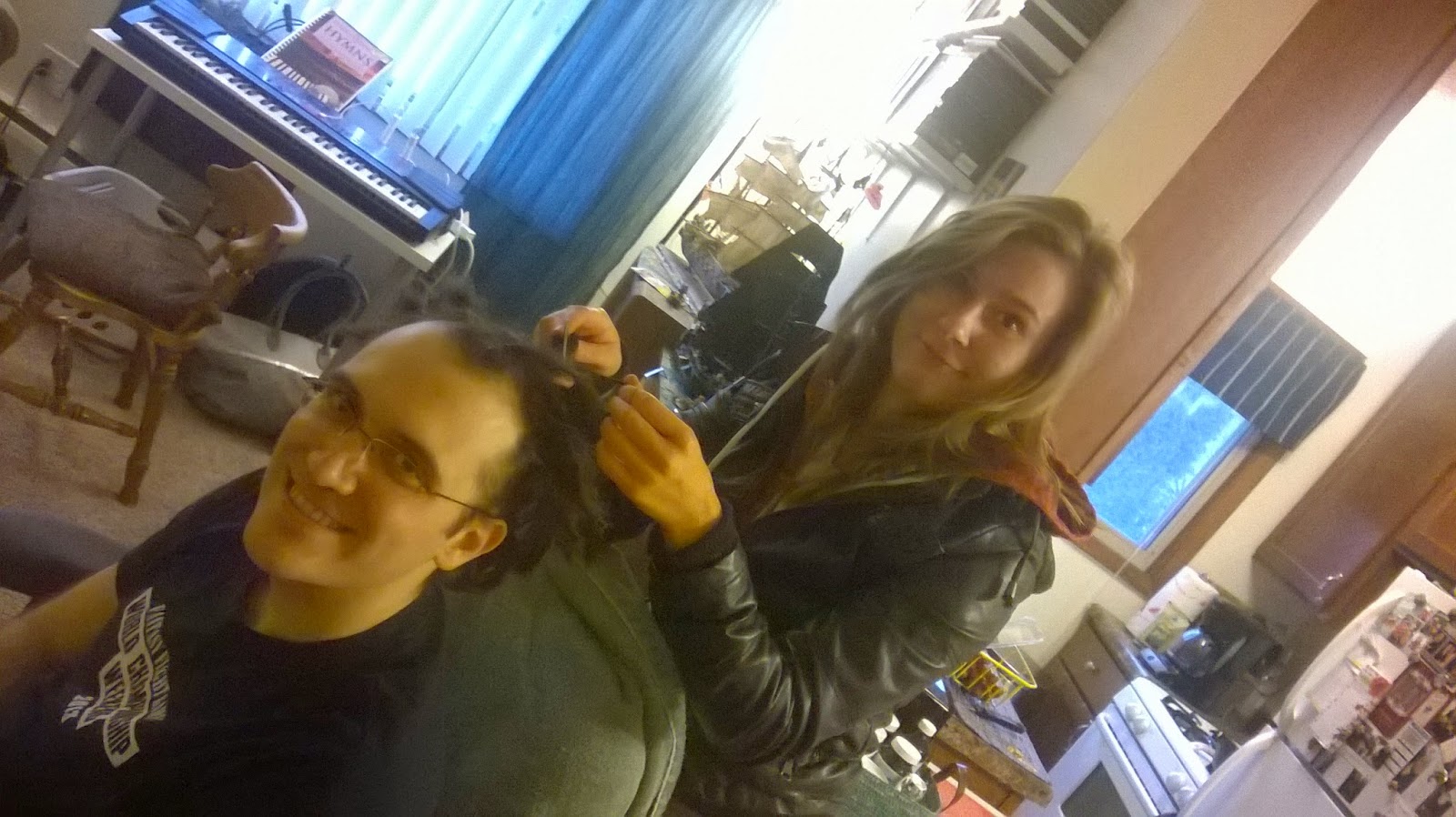 We switched on and off so that everyone's hands could get rested. 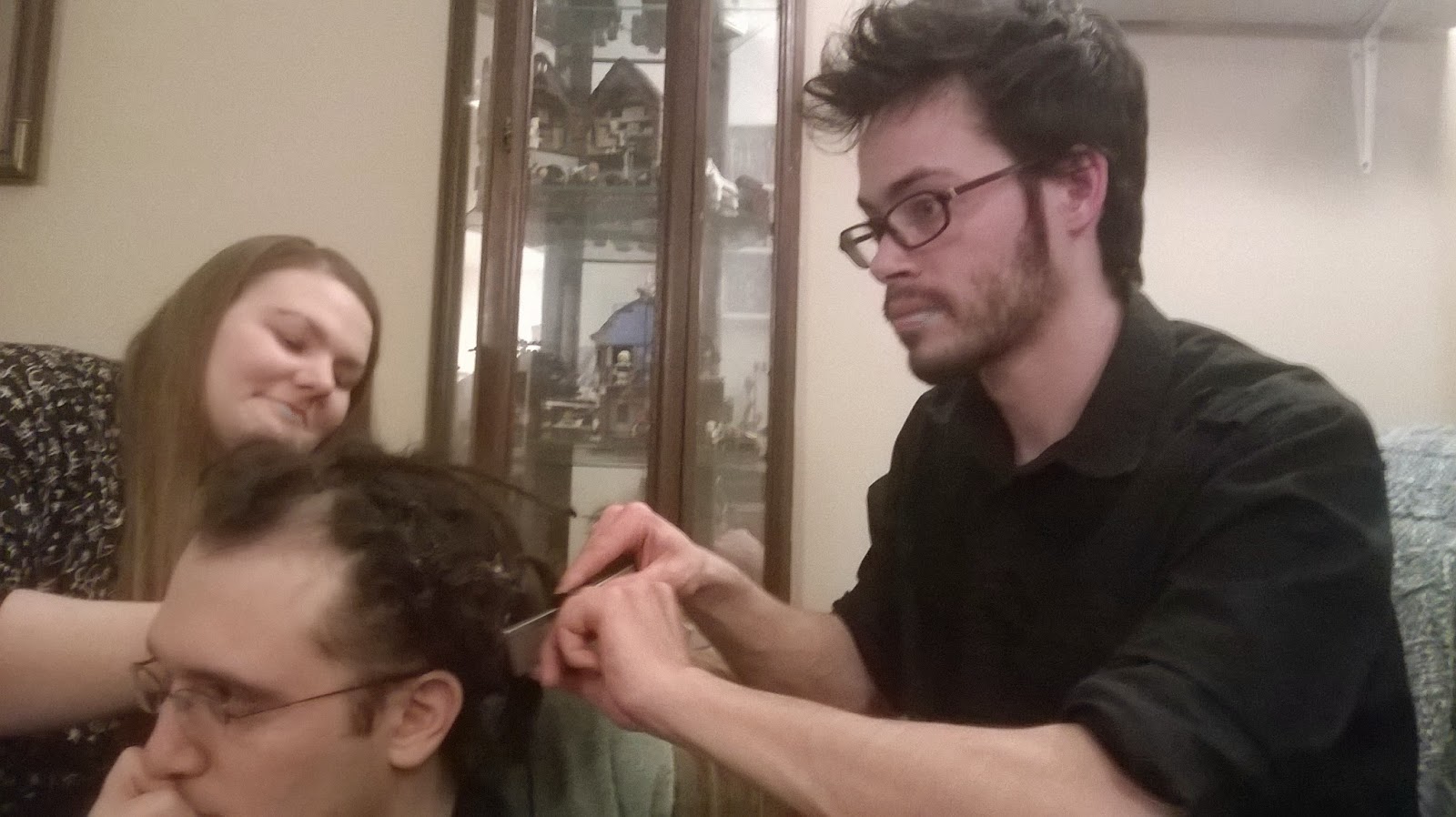 We had pizza and alcohol and watched "The Emperor's New Groove." 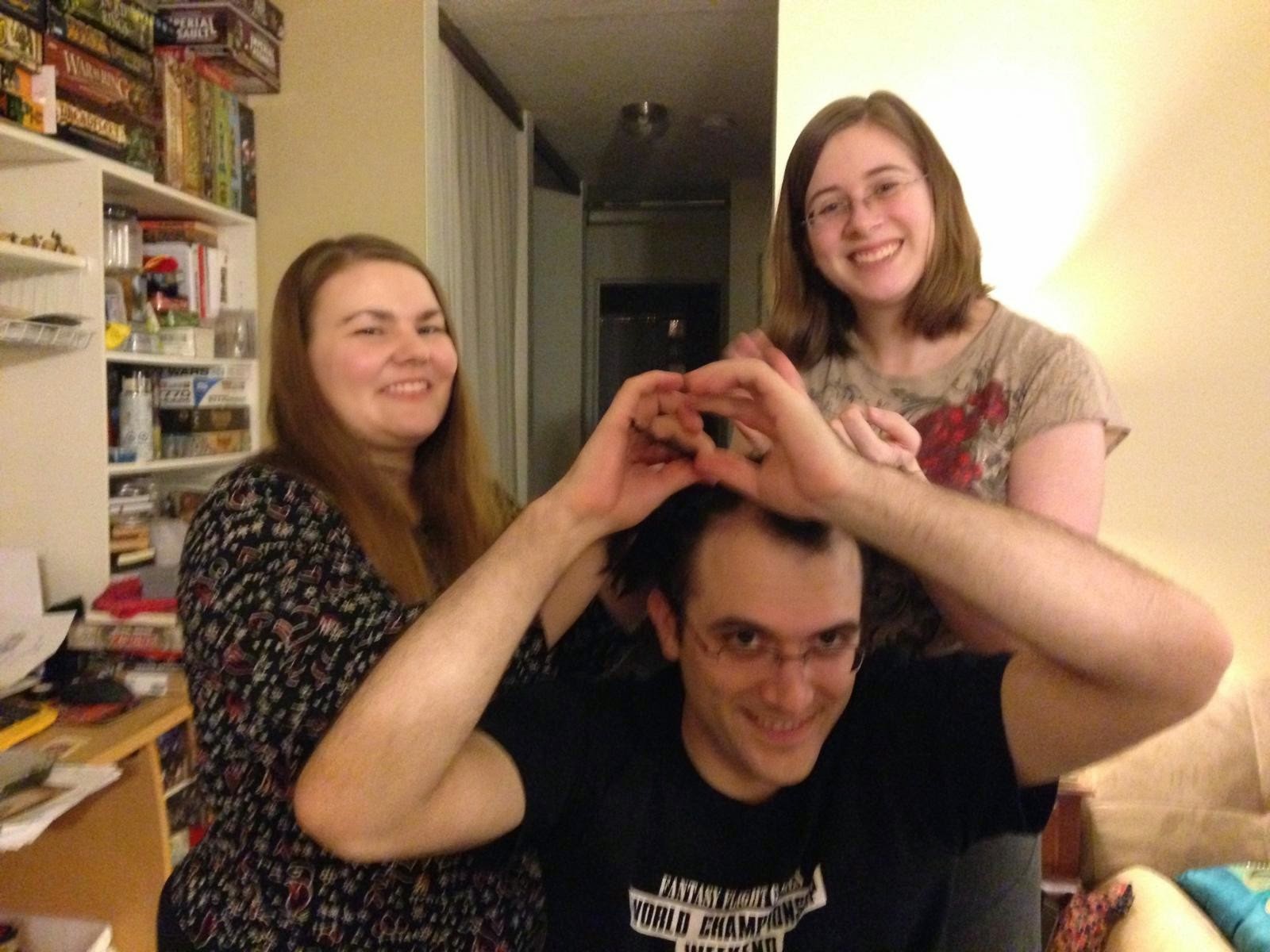 Then we pulled out the special wax and palmrolled it into each of the dreads. (We probably didn't spend quite enough time on this, but oh well. Everything seems to be progressing nicely.) 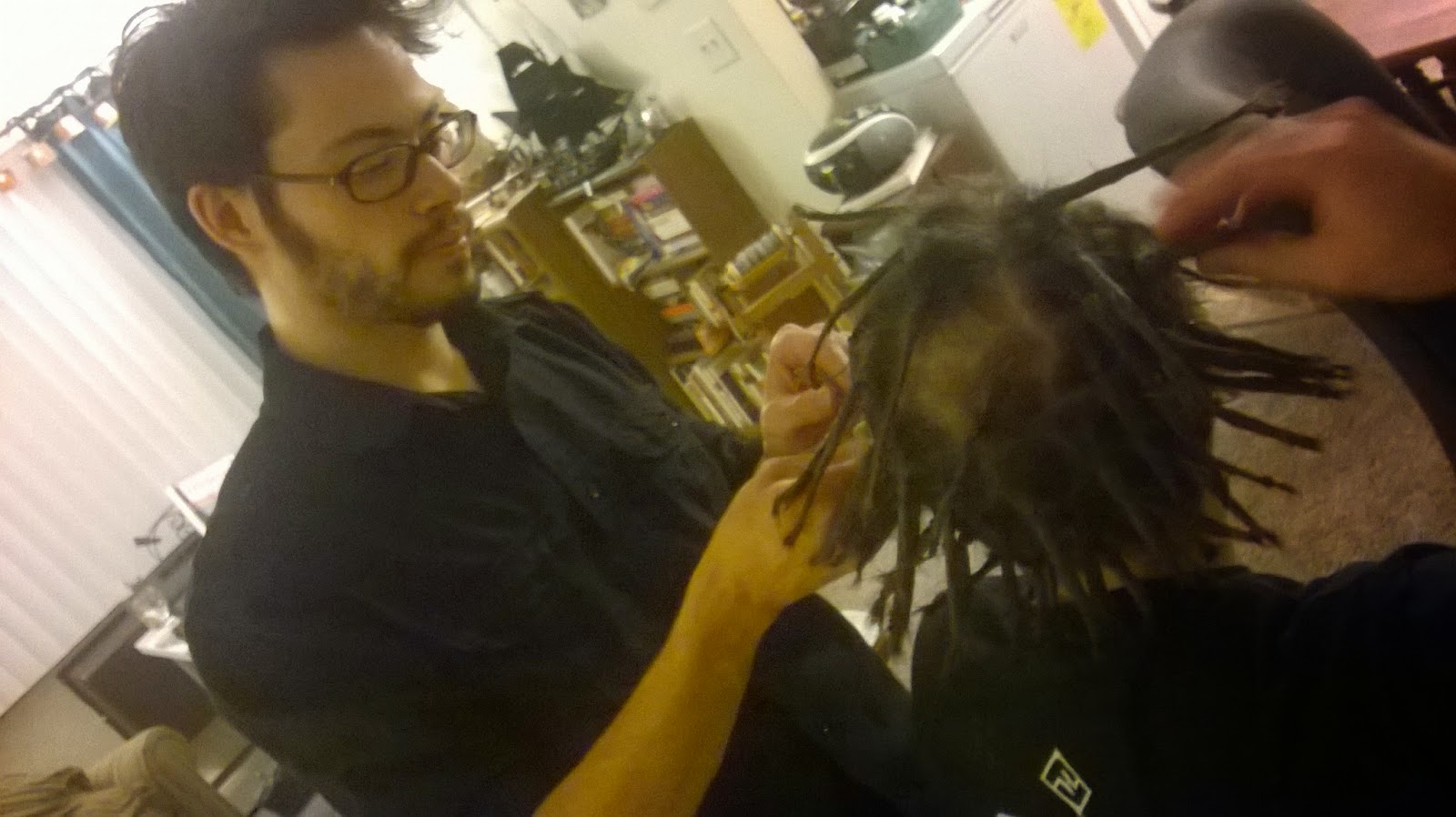 The wax made his hair stick out stiffly. It was funny. 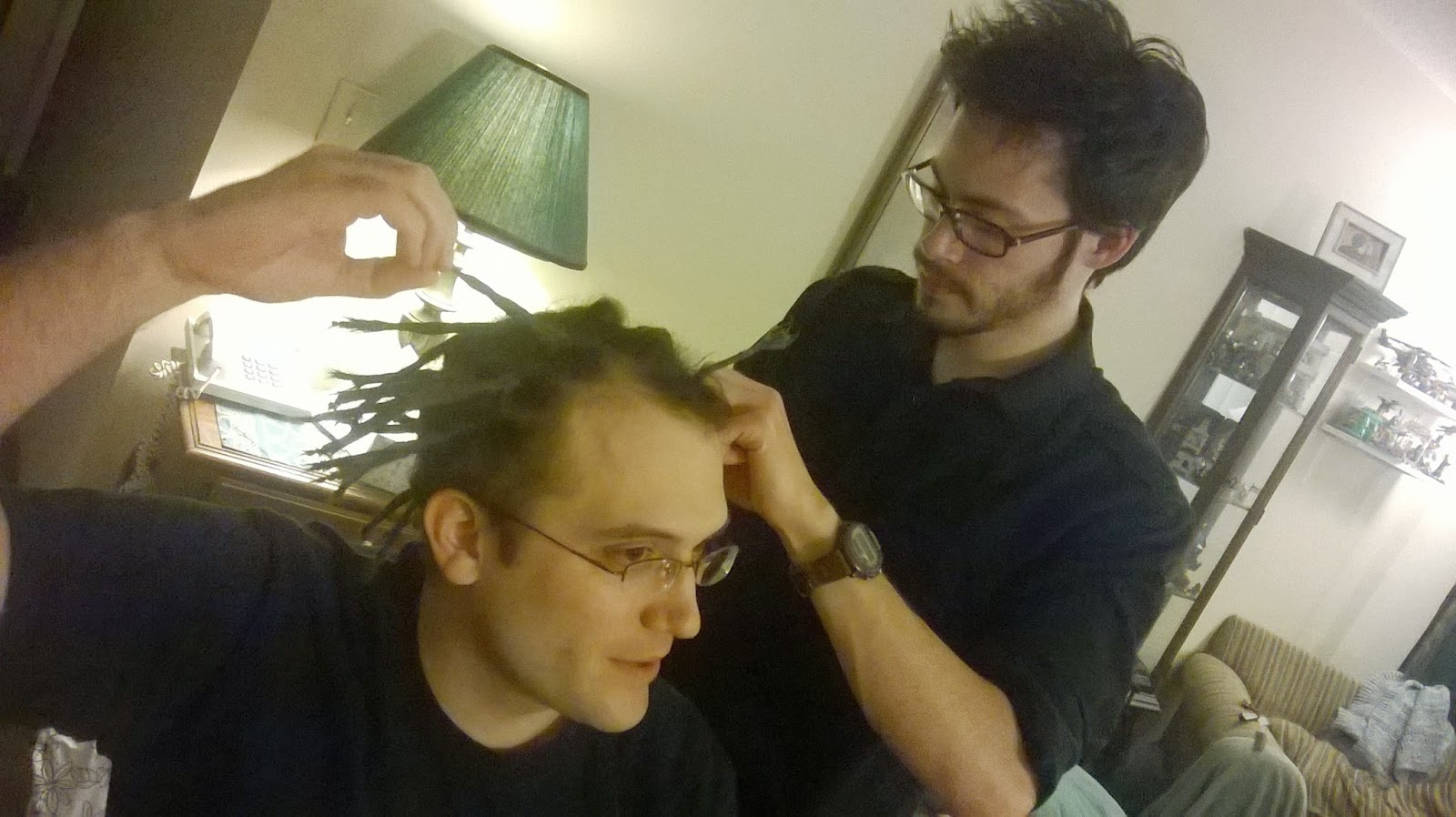 After the wax was in, everyone went home (it was LATE) and I stayed up another hour with the hair dryer to melt the wax into the center of the dreads and sponge off the excess. 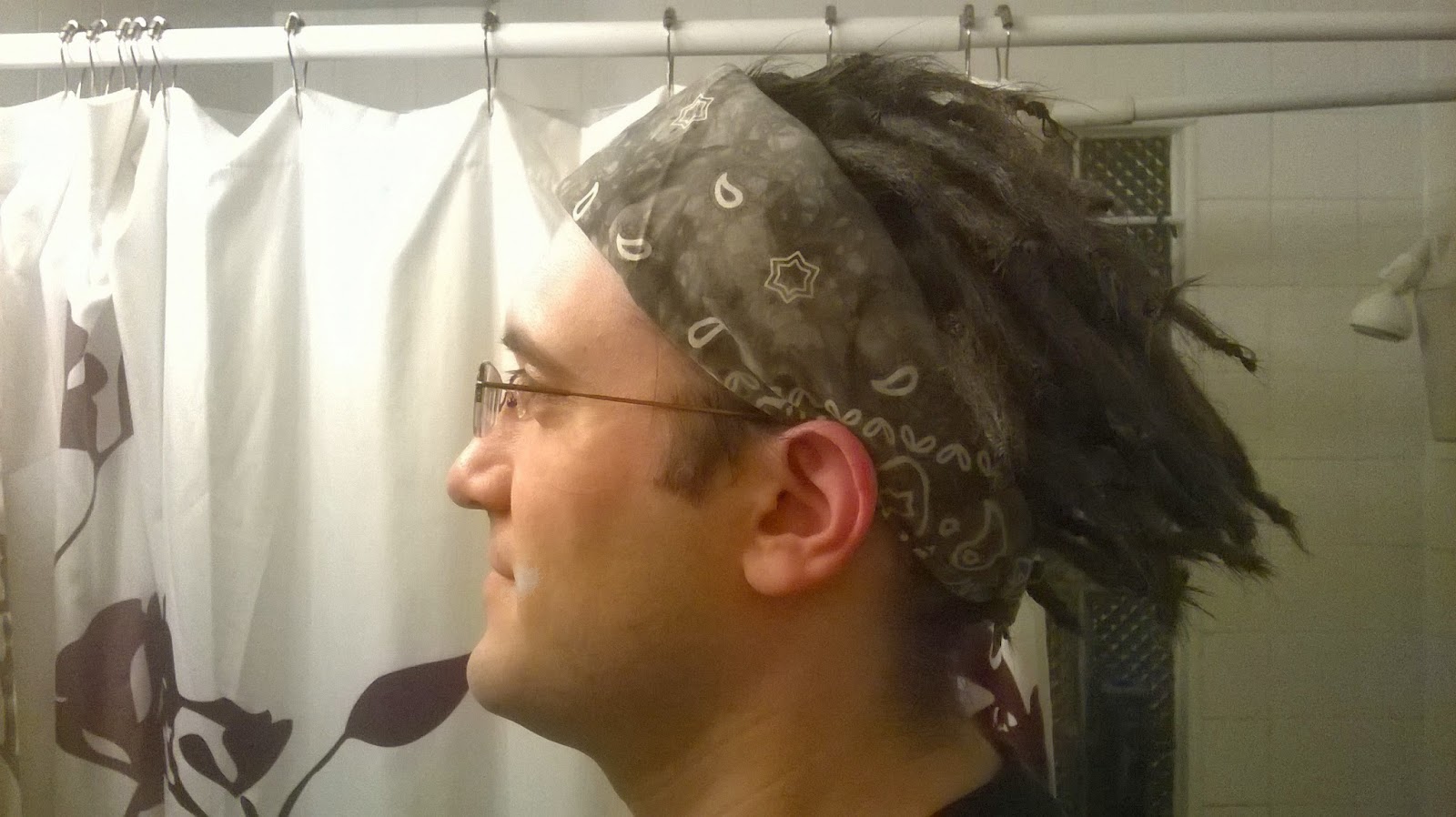 This is what it looked like at the end of all that - baby dreads! When I say baby, I mean that they're brand new and looking the grossest they'll ever look. Nathan has a regime of twisting and waxing and washing that he has to follow and in a few months the dreads will look a LOT better (or so I've been promised). 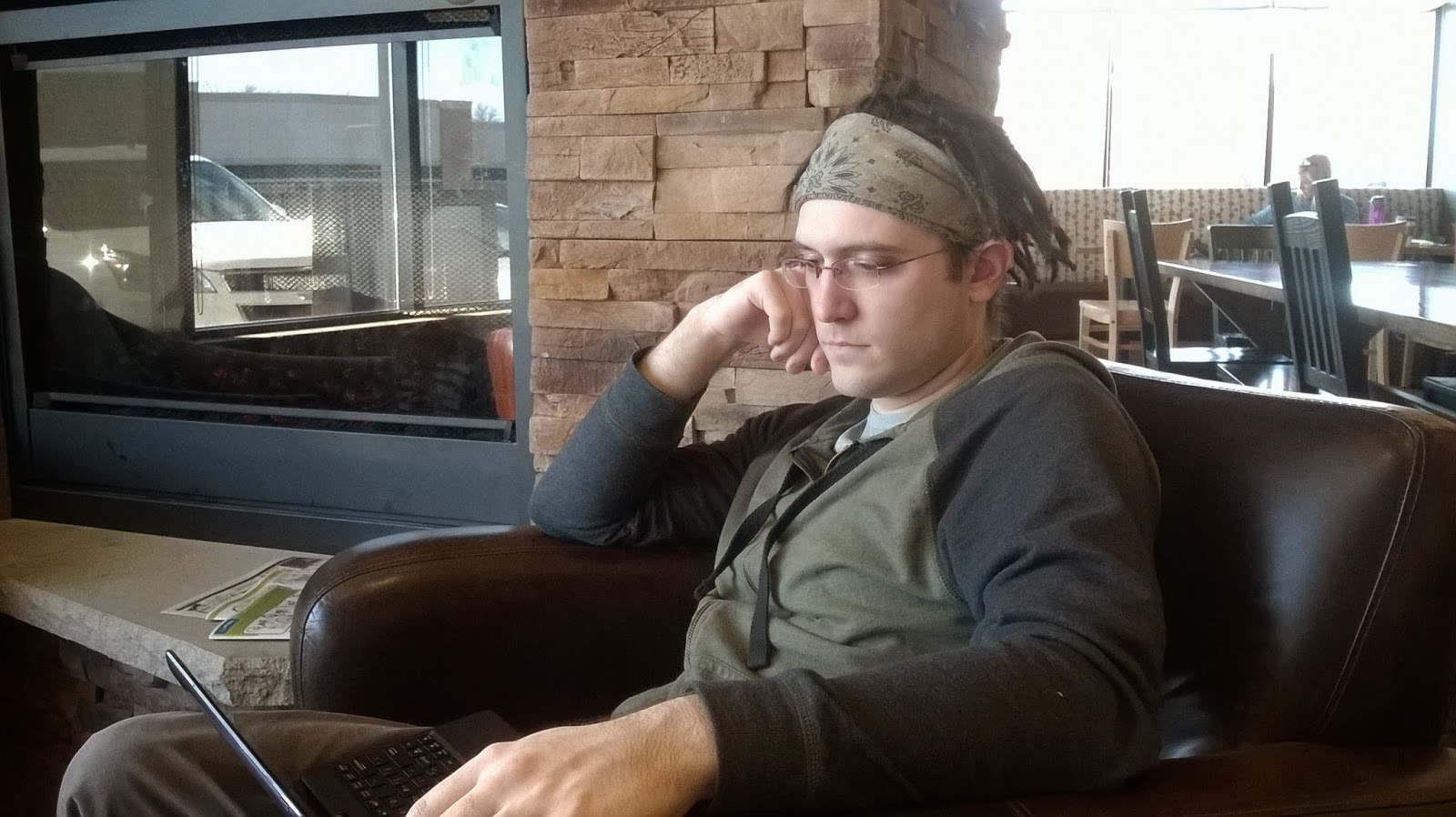 This photo was taken a week later, and that was 5 days ago. As of last night, they were locking up really nicely. There are some stray bits that need to get fixed, but overall I am pretty impressed with how we've managed. When we were at my doctor's office everyone was asking where he got them done and he'd say "we did them ourselves!" which is cool.

I may not be a huge fan, but he LOVES them, and I love seeing him so happy. That's what makes it worth it.
Posted by Elizabeth Amy Hajek at 2:14 PM

That was such a loving and thoughtful gift to give to your husband! This is exactly what true love looks like :) You guys are an awesome couple.

Lol, my husband and I just watched The Emperor's New Groove just the other night! How funny :)

This needs to happen somehow.