I haven't been great about keeping up with writing reviews lately, but, eh, health issues. That's how it goes. Still, I have been enjoying the recent twists and turns on "Once Upon a Time."


Seriously, though, the moment I gave into "oh, Hook is cool, I guess I ship him and Emma" they have him turn evil again. HAHAHAHAHAHA. That was hilarious timing. 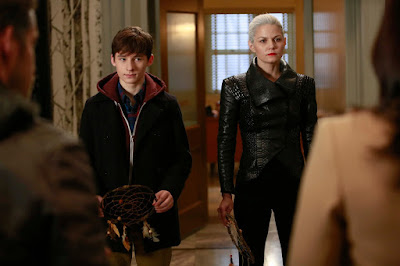 But it is fascinating, after Sunday's episode, to see the contrast between Emma's pretend (but not real) Dark Oneness, and Hook's immediate and complete capitulation to villainy. After spending the whole season going "Emma's evil!" to "Is Emma really evil?" to "Wait I think she has a plan and is not actually evil..." to "SHE IS TOTALLY NOT EVIL well except that thing with the girls heart but okay" ... and then Hook is just... BAM. MOST EVIL PIRATE. (A very funny evil pirate, though.)

But really, OUAT gets plenty of criticism, but there have been some intriguing new things happening this season that I think they should get kudos for. Getting to see Rumple finally turn GOOD, completely, and see him and Hook face off again was immensely satisfying. I'm not 100% convinced that was Belle at the end there. I mean, it seemed like exactly the sort of thing Hook might do to mess with Rumple, and a few lines rang less than true to Belle's character. Who wants to guess that he's actually holding her prisoner somewhere?

Zelena confuses my emotions. She's an awful, vile person - but she is so entertaining to watch. It was heartbreaking to see her with her baby (still nameless - who laughed at the "Baby Hood" namecard?)... yet I still have to wonder at Robin and Regina's sanity because what on earth was preventing Lady Green from poofing off with baby and disappearing forever??? We'll see, I guess. I'm guessing Zelena either begins reforming or dies by the end of this season.

Now the whole "ALL THE DARK ONES" thing was a bit overkill. Rather than one big villain, we get two dozen black riders running around? Hmmm... seems like a good way for our heroes to get even less screen time. But I guess it'll all lead into the Underworld plot for 5b, so we'll see...

...the good news, however, is that it means Merlin is very likely coming back at some point. So for everyone who cried out when Hook crushed his heart... stay positive! His face is probably not gone for good yet!