More on the Engagement (and Wedding!)

Wow. It's my third day of being engaged and it's still slightly surreal. My facebook has completely exploded with some of the sweetest, most encouraging messages of congratulations and best wishes. It's been so amazing and special. 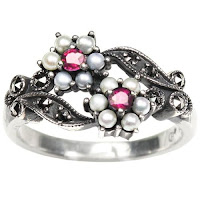 The Ring has also been popular. I was very adamant that I didn't want diamonds, so Nathan found me this gorgeous vintage inspired piece that I am utterly in love with. I had shown him some designs I liked ahead of time, but none of them were anywhere near as amazing as this one is. (He ran it by both my sister and his ahead of time. My man is so thoughtful!)

Now, there are several questions I get asked over and over, so I figured I'd answer them properly here.

Were you surprised?
Not so much. ;) I knew he had talked to my parents, and I also knew that timing wise this was when it needed to happen. Plus he wanted to make sure it was a proposal I was very happy with, so I had some input.

HOW DID IT HAPPEN?
We live in an area with some very beautiful parks. Nathan took me to one of them and we walked around the lake at sunset. It was absolutely gorgeous and just the right time and temperature that the bugs weren't out yet but we weren't dying of heat either. We found a little isolated peninsula that we reached by crossing a stepping stone bridge, and then he got down on one knee and asked me to marry him... 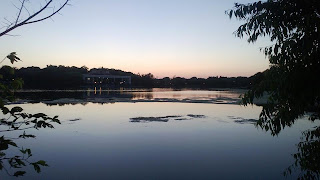 Do you have a date?
We have a day we very much would like, but we're still ironing out all of the details. We did just find out that the venue we'd like is availible then, so things are lining up. Still praying about God's timing though! The earliest the wedding would happen is January 2014.

How did you guys meet in the first place?
Okay, no one has actually asked me that, but considering that I always wonder it about other couples, I'm sure there are some of you who are curious. We actually met last December on ChristainMingle.com, after some friends and family had suggested to me that I check out internet dating. We hit it off immediately, and our first video chat lasted three hours! As soon as he arrived in state for his new job we had our first offline date and neither one of us wanted to say goodnight. ;) Two weeks later he officially asked me to be his girlfriend, and a month after that I got to go meet his family (who are fabulously wonderful people). And the rest is history. 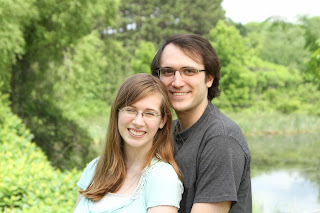 I hope he knows what a treasure he's getting!
Okay, I feel a little egotistical posting that one, but I've gotten that comment so many times I do want to answer it properly. First of all, I feel so humble and grateful that so many people would have that reaction. The truth though? I'm the one getting the treasure. Nathan is so good to me. He is sweet, considerate, funny, hard-working, and incredibly selfless. He's already stuck by me through some difficult health stuff and made it clear that he's in for the long run. He is so much more than I ever dreamed I would find in a future husband and I credit that entirely to God's provision.

What is he like?
Well, some of you have actually gotten to meet him, but for those who haven't... he was homeschooled, like me. He is a very strong believer and really encourages me in living a Christ-centered life. He works as a creative content developer for a prominent gaming company (board games and RPGs, not video games), so my mother calls us "two creative peas in a pod." Example: for CONvergence he not only went in costume as one of my favorite comic book heroes (his idea, not mine) but actually helped me make the costume! And my family rather adores him which is just such a confirmation of how right we are for each other. 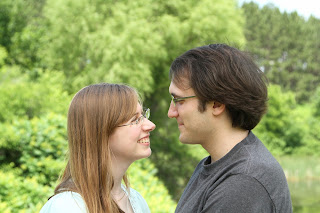 So... I think that's all the pertinent information. Wedding planning is already in high gear and we're having fun with it. My sister and I decided on Wednesday morning that we wanted to go dress shopping... and lo and behold the very first dress I tried on was THE ONE. I kid you not. I have spent years trying to imagine my wedding dress and NEVER could figure out anything I really liked. Then BAM. This one appeared. I tried on several others but none of them compared to the ONE. So. My parents went ahead and bought it. Totally unexpected, but rather a relief to have that done! Amanda keeps teasing me that I ought to have the cake made by now... I do have a hold placed on the venue hall and first draft of the guest list done!

I am definitely going to keep this blog from being completely taken over by wedding everything, but I'm sure it will continue to surface, as I only intend to go through this process once and would like to share some of my thoughts as I come up with them.

Posted by Elizabeth Amy Hajek at 11:39 AM

lol, this is all great! Wedding planning gets a lot easier when the engagement isn't a surprise. My husband and I had been communicating about engagements and potential wedding dates for the longest time, so it took half a week from getting engaged to having a church and reception hall booked, our bridesmaids and groomsmen chosen and asked, and since I was wearing my mother's dress that was no problem.

God bless both of you!! ♥ I'll be praying as you plan. It's SUPER fun but prayers for some of the inevitable stresses, even if they're small, never hurt. ;)

It makes me so happy to read this! I'm brimming with excitement for you both... so happy you've found a guy who sounds so perfect for you and it sounds like he absolutely adores you. :) I'm grateful the Lord let us reconnect a few months ago, Elizabeth, and that I get the opportunity to share in your happiness more than if I had just found out through the grapevine of our mutual friends. Such a blessing! :) :)

Thank you for this post, Elizabeth! You two are perfect together. Also, I'm so impressed at your organizational skills; I can't believe you already found "the" dress! Good luck and God bless, dear!

The ring is so beautiful! Wow! And that is a lovely story. Hmm. Perhaps someday I'll use ChristianMingle...wonder if they have any cowboys on there.... ;D

Huge congratulations to you both! :)

Congratulations on your engagement!! It is such an amazing time!I hope and pray that you two have a happy and beautiful engagement and that the wedding plans fall into place. Peace :) 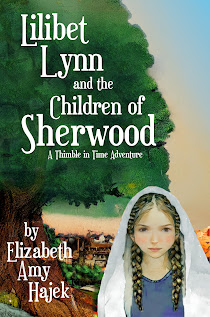