This is too good to be a Star Wars book 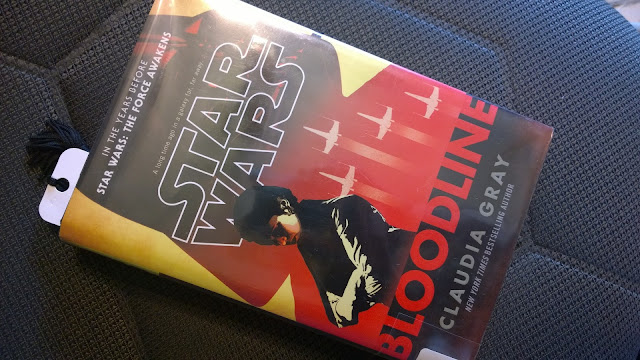 Once upon a time there was a young lady who amassed such library fines that she could not get ahold of the new Star Wars novel "Bloodline" when it first came out. Then, one day, her husband got a library card and a fine-free account, took her to the library, and lo and behold, the book was on the shelf...

I started "Bloodline" with low expectations and, truth be told, I almost don't want to give you any expectations at all, because I want you to be as blown away by this book as I was.

I've read perhaps a dozen Star Wars books over the years. Although I enjoyed some (the Thrawn Trilogy, of course, and there was an Obi Wan novel I can never remember the name of...), others (notably "The Courtship of Princess Leia") burned me enough that I became very reluctant to invest time into novels in this universe. So when I heard positive reviews coming in for Claudia Gray's "Bloodline"I assumed it was good by Star Wars standards. I didn't expect it to be amazing by regular book standards. The whole way through I kept thinking "Oh man, I hope it finishes as well as it began! I'm so afraid it's going to wobble in the third act! It can't really be this good, can it?"

It could. You guys, this book is really, really good. This is, of course, a biased and personal opinion, but I feel as though this was the Princess Leia novel I've been waiting for my entire life. I'm about to gush all about it, but I'm going to keep this review spoiler-free.


Set between "The Return of the Jedi" and "The Force Awakens" this is Leia's story, detailing the political environment of the galaxy in a post-Empire world, and telling the story of the rise of the First Order and the Resistance. Leia is squarely the protagonist, and Gray does a brilliant job of capturing both Leia's inner voice and the dialogue of canon characters, such as Han Solo. Seriously. So many books have made a travesty of the characters and their voices. This one does not. It feels exactly like it fits in the universe, was written by the best of the film writers, with plenty of input from Carrie Fisher. (I don't know who got what say over the books, I'm just saying how it felt as a reader). In other words, it feels authentic, and flows wonderfully.

Nearly every character from the movies that Leia has any connection to is referenced in some form or another, in a beautifully seamless way that strikes the right balance of homage within a reasonable narrative flow. This is done so well, in fact, that one almost misses the fact that only two film characters other than Leia get direct screen time.

While Leia is the main character, there are several secondary characters created specifically for this book that absolutely shine. Well crafted, engaging, dynamic, and the perfect mix of likable and flawed, each member of the cast Gray has crafted jumps off the page. And while you might think my weekly Star Wars RPG gives me an edge in the ways of navigating alien names and species, my group (and my husband!) will testify to the fact that I still get super confused by alien names all. the. time. So when I say that the names work well and are fairly easy to keep straight, I think this will prove true for the average reader as well.

Speaking of average, you can absolutely pick up this book with nothing more than movie knowledge. While there are plenty of tidbits for those with expanded universe knowledge (I totally geeked out over the early mention and consequent plot-point of the Twi'lek planet, Ryloth), none of these are overshadowing or necessary for the story. The book does a good job of giving the reader everything that it needs to know.

Gray certainly benefited from being able to play in a cleaned out sandbox. While the decanonization of the original EU remains an emotional topic for many fans, I believe that Disney has started bridging the gap by showing their willingness to retain the best of the old world (Thrawn, I'm looking at you). Still, this book is written on a clean slate. Leia grapples with facing the realities of her past and the shadow of the future and it feels fresh and new.

I was a little uncertain of how an older Leia would work as a character--bias of youth, here! But I have to say, it worked very well. Although Leia is feeling her age, she is no less of a character because of it. Indeed, getting a main character who is over 40 years old? It's so rare to see, particularly in an action genre, and Gray does it so well. Leia is still Leia, no matter what the age.

One final tidbit that I personally really geeked out over: the inclusion of costume details. Although never so much as to overwhelm the reader, Gray does a nice job of slipping in a few clothing details here and there that really give a good feel for the different environments and pays homage to the importance costume has always had in the Star Wars universe.

The title, "Bloodline" refers to several things throughout the book. I don't want to give away spoilers, but much of the B-plot revolves around the ramifications of Leia's heritage in a way that I had never contemplated before.

In short, friends, this is a book to read. While I'm sure some superfans of the old EU will have some feelings and thoughts from their unique perspective, I think, overall, this book will be wildly enjoyed by most Star Wars fans, whether they have only seen the movies, or gone on to watch the tv shows, play the video games, read the old novels, etc. So if you're looking for something to tide you over until "The Last Jedi" hits theaters, definitely pick this up--today!

Looking for more of my musings on Star Wars? Check out the following:
- Han and Leia - the Bickering Couple Grows Up (Post Episode 7)
- The Force and Forbidden Romance - Symmetry and Storytelling
- I Don't Want to Write this Tribute (Carrie Fisher)
Posted by Elizabeth Amy Hajek at 11:02 AM

Wow, this sounds really good! I haven't actually read any of the Star Wars books (except for a board book that my son owns), so perhaps this shall be my first :)