Reflections on My Mother's Dresser; or, a Room Redecorated 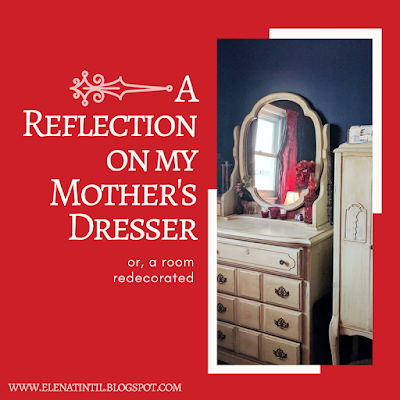 Nathan and I recently completely redid our bedroom decor. And by redid, I mean that we replaced every piece of furniture and painted everything. It was a big project. And not one that I undertook lightly.

When we first married, we moved into an apartment and had the tiniest bedroom, since the larger room needed to go to the sewing business. (Nathan was completely on board with this, BTW). We pretty much combined the furniture we already had, got a new bedspread, and lined the free wall with bookshelves.

Then we moved into our new house and I knew that eventually I'd want to do something really cool in our master bedroom. It needed to be a design scheme that we'd both be happy with for a long time. We were getting all new-to-us furniture (more on that in a bit), but it was all dark wood and I'm not fond of dark wood. So that meant we needed to pick a color for the furniture, and Nathan really liked the look of light cream. I approved of this because it meant that I could pick a color for the wall and I LOVE colored walls.

The problem was that our favorite colors that we haven't already used in the house are red and blue. Combine them with cream and you get a very patriotic mix. Could we really work out a scheme that evoked a different feeling than "USA!" ?

We thought that we could. 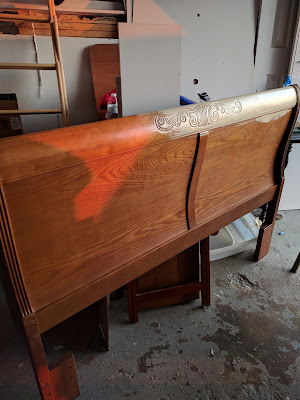 We found our bedstead at the neighbor's garage sale. I'd been looking for one for awhile, but never dreamed I'd be able to get such a nice piece for just $5! 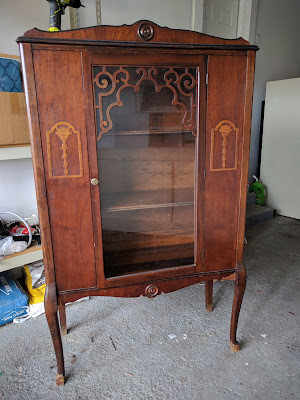 This china cupboard was saved from a family member's dumpster. I loved the look of it, but it never worked well as a display cabinet. Then, as I was scrolling through pinterest for ideas, I realized that it would work beautifully as a linen cabinet. I could combine easy bedding access with colonial elegance, AND keep the dust off my sheets at the same time! 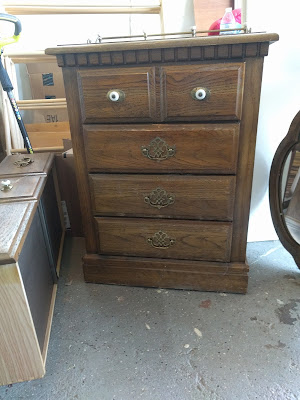 But the real grounding structure of the room would rest on the new nightstands and dresser--furniture that had originally been a wedding gift to my parents and was now coming for a second life in our house. 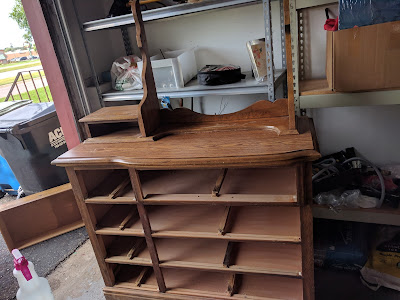 This furniture featured acrylic tops, which could not be sanded and painted via traditional methods. My sister, our family art major, suggested that I look into chalk paint. I was initially concerned about the feel of the chalk paint texture, but when I checked it out in person, I realized that it felt just fine (especially when covered with polyacrylic, as my online research revealed was best for longevity). 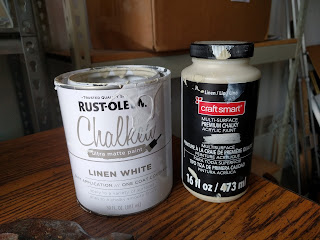 Chalk paint has become the hot new thing in DIY circles and for good reason. It is great for a single coat, no sanding, antique look finish, and, though expensive, a little paint goes a long way. I mixed the Rust-oleum Linen White "Chalked" (Home Depot) with the Craft Smart (Michaels, coupon) Linen to get the cream shade I desired. Three cans of Chalked and one 16oz bottle of Craft Smart covered all of the bedroom furniture AND an additional dresser*, mirror and a couple small items with nearly a full can left over.

*For this second dresser, which is for a different room, I successfully tinted my linen white with acrylic paints to get the exact shade of seafoam I desired. 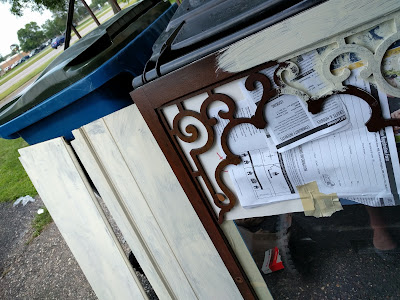 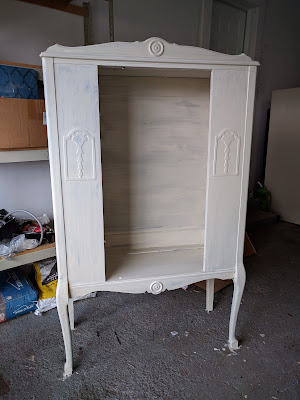 I spent a couple hours a day working on the furniture for about three weeks. Each piece required prep and hardware removal, a coat of paint, drying time, distressing, wax application, more drying time, possible touch-up, and polyacrylic application. I did the majority of the work, except for the polyacrylic which Nathan applied since the fumes made me sick. (Chalk paint has low fumes and I found that as long as I worked outside, I did just fine). 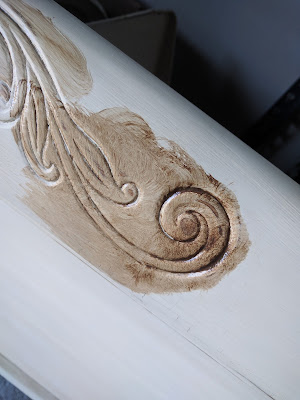 The wax application was really fun! 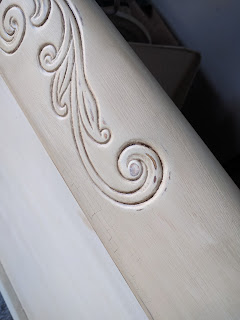 Nathan and I both really love a good antique patina on our furniture! 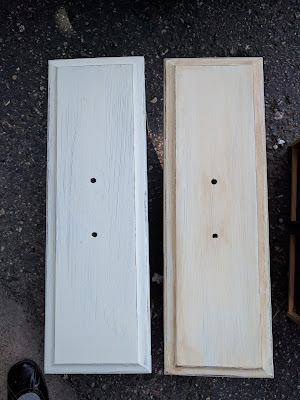 Here you can see the difference between the initial coat of paint, and the patina given by the antique wax application. 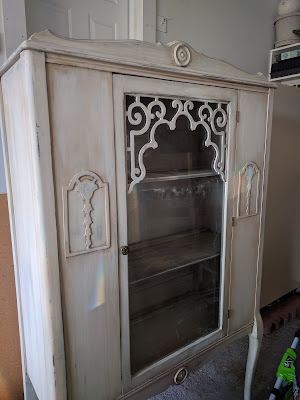 It is just the coolest thing to see these pieces of furniture get a second life! 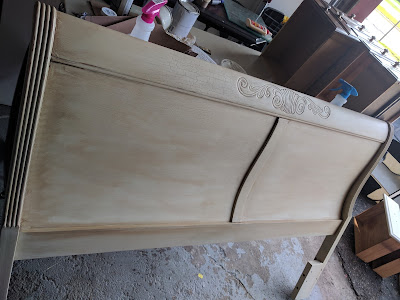 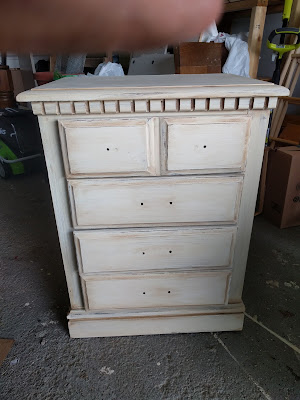 I had a lot of time to think while doing the work, especially with the furniture from my parents. It was kind of surreal. Here were these pieces which had been fixtures of my world for my entire life, and I was completely changing them. Different paint, mostly different hardware...and yet the bones were the same. I'm at a point in my life where I've really come to appreciate and share so many of the views and practices that my mother always tried to instill in me and taking her dresser just seemed really symbolic of how I've come to imitate her in so many ways. I spent so much time in my youth trying to forge my own path and prove that I could do things my way...but my mom was right about so many things. 20-year-old me never would have believed it any more than she would have liked the idea of using her mother's dresser! And yet, with a little twist of perspective, the beauty is there... 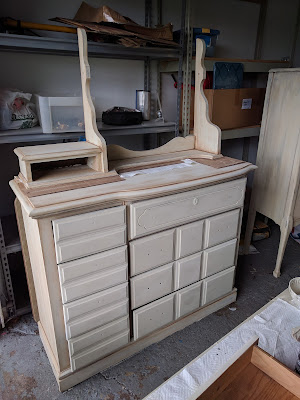 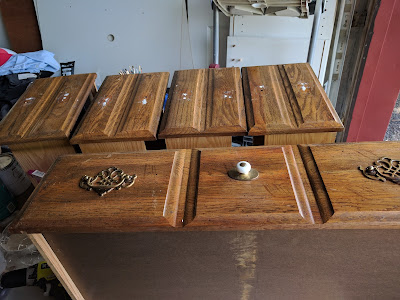 Our total cost for this project was around $50 (maybe a little more once we included the wall paint). Initially I was concerned that the new hardware for the dresser was going to be a problem. Then I realized that the brass handles were actually quite pretty, and I could keep those. 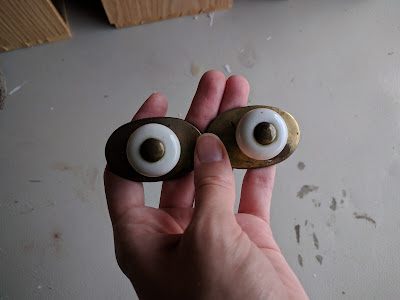 The googly eyes had to go, though. 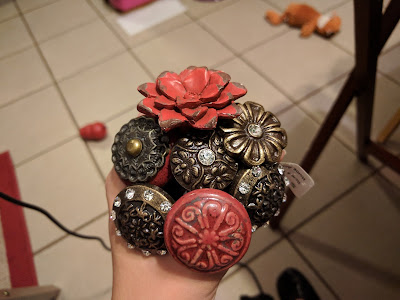 Hobby Lobby puts their knobs on sale every two weeks, and I brought home a bunch to test out! Initially I thought it'd be cool to mix and match knobs, but the dresser itself has so much character that they result became chaotic rather than charming. 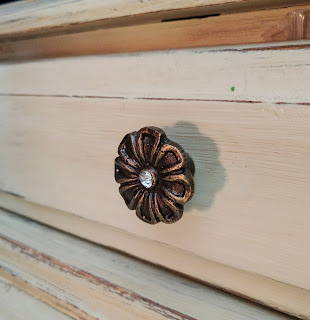 We ended up going for a happy medium, each nightstand and the dresser have their own style of knobs. 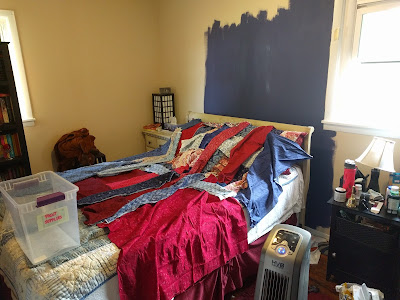 Next up was the most controversial part...the wall paint! Originally I'd planned to do red walls, but over time I got tired of so much red in the room. Plus, so many of our pillows, lampshades and knicknacks are already red! We needed contrast.

We floated around the idea of blue...DARK blue! Which, as everyone knows, is kind of the ultimate no-no for a small bedroom! But I had a vision in my head, and I liked the idea that it would actually make the room darker and more peaceful to sleep in during the early morning hours. The cream walls that the room was originally painted in tended to reflect sunlight and street lights, so if the curtains let in any light at all it could get blinding pretty fast.

When we went to the store to take advantage of the Labor Day paint sale (Home Depot always has good paint rebates during holidays), we dithered around the blues. I found this one shade that, although dark, had this beautiful richness to it. But...it was so dark...and the guy mixing the paint said that it would probably come across as black.

I wasn't sure, especially once I found a sample page in a brochure that had my chosen color and it looked AMAZING! But we took home the sample of a lighter color. Once it was on the wall it would seem darker, right?

Look at the photo above. That's...periwrinkle. Way too faded and purple. Not the effect at all. It also didn't go well with the fabric for the quilt that Nathan and I are making to compliment the room.

We went back for the color that sung to my heart. 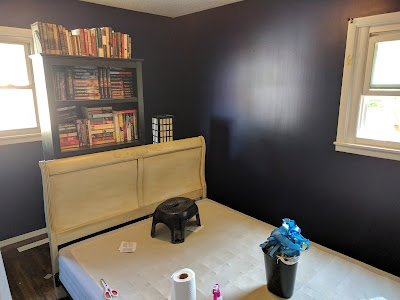 I was so much happier. The photos really don't do justice to the rich, beautiful blue that our walls are. There is this inner glow to it that reminds me of the TARDIS, even though our blue is much darker. It just makes me so happy.

Because of the paint fumes, Nathan did this part of the work. He was a professional house painter in his teens, so he didn't mind and did excellent work. It took two coats of paint to do the room, which was less than two gallons (but more than one, alas...)

In the photos above you can see a black bookshelf. We live near a highway and when we first moved into the room, the noise drove me CRAZY. We put this bookshelf over one of the windows to help block out the noise. But when we redid the room, we realized that it was going to be a much nicer effect if the bookcase was gone. So we tried out moving it...and I did fine. I love my books, but they really do make a room busier! 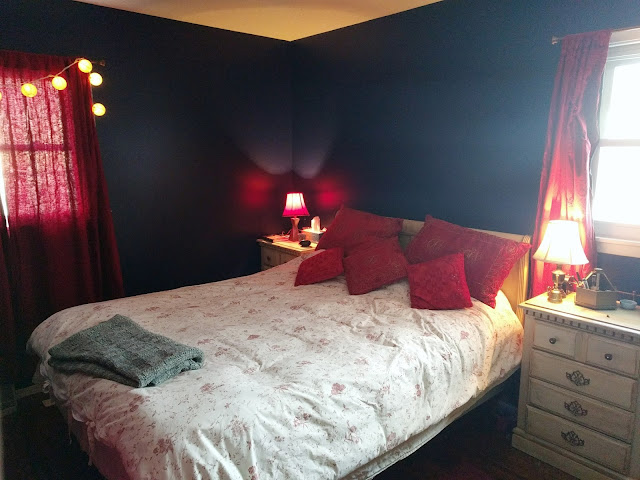 I am really, really happy with how it all turned out! Eventually we may hang some simple wall art, but not until we get the quilt done, as that will add a lot of business to this view. 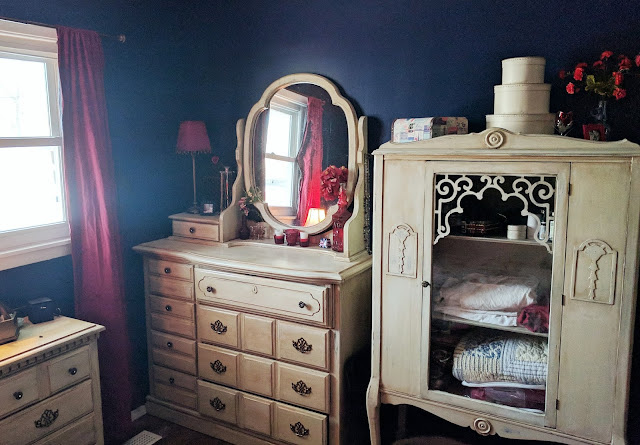 The dresser turned out even better than I anticipated, and I am utterly in love with my linen cupboard! 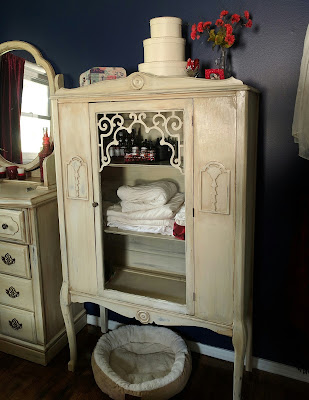 The top of the cupboard makes a nice place for some accent pieces, and below it is plenty of space for a doggy bed and a laundry basket. 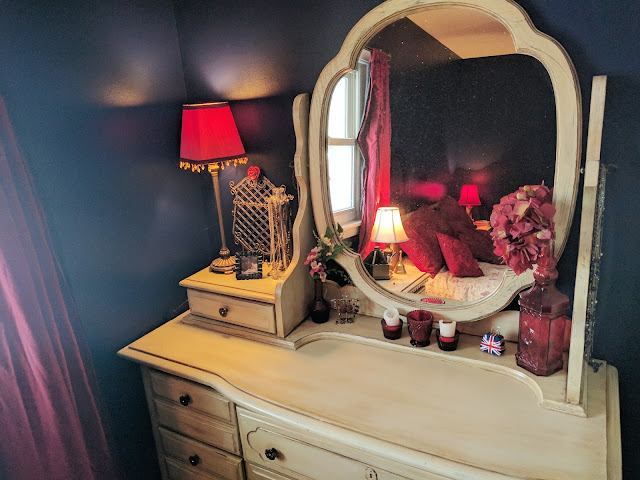 Here's a creative shot so you can see most of the pieces together! 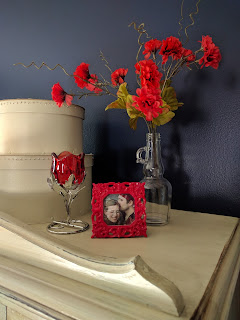 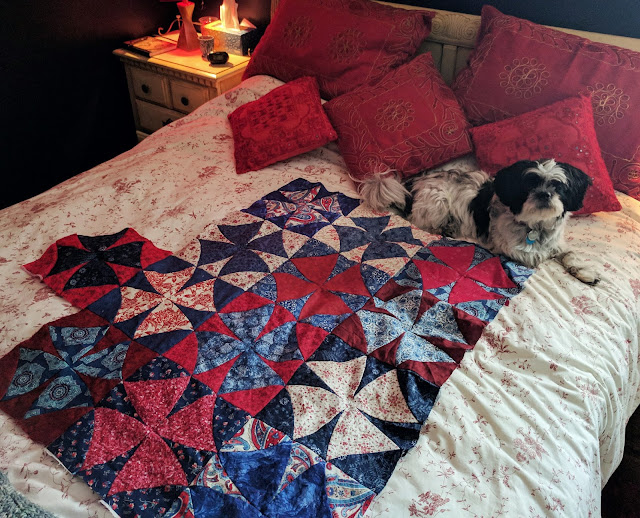 We completed all of this a couple of months ago, but I've held off on posting about it because I wanted to be able to blog about the quilt as well. It's going to be awhile before the quilt is finished (I'm handsewing the whole thing), but it is now large enough to demonstrate what the full effect is going to be. It's really going to be a special piece, because my grandma gave us some of the fabric for it, Nathan is cutting out all the pieces (over 500 of them) and I am handstitching it all together. The final part of the scheme is to get Nathan to help me actually quilt the layers together...

So that's the remodel. Like most things in our life, it's a melody of old traditions and new viewpoints, with a touch of the classical and whimsical, and melded together with love and thrift.