Corinna Turner and "The Siege of Reginald Hill"

Welcome to the final stop on the blog tour for Corinna Turner's "The Siege of Reginald Hill."
If Turner's name sounds familiar, it is because she is the author of the gripping "I Am Margaret" series (my review here), the heart-wrenching "Someday" (my review here), the fantastical alternate history "Elfling," and the quirky "Mandy Lamb and the Full Moon." I love her works, even though she writes them faster than I can review them!
For her sixth entry in the world of "I Am Margaret," Corinna once again delves into matters of faith and future, and what it means to truly battle for a soul. I was intrigued by the premise of the book (which I got to preread in beta) and was excited to get a chance to interview Corinna about the unique challenges of writing "Siege," formatting/tweaking for American audiences, and her favorite holiday traditions!
Q: Let’s go back to the beginning. How did you first conceive of Margo and her world? What was it about that idea, of all the ones spinning in your head, that captured your literary imagination and demanded a book? Well, a series of books!

A: I had the core idea for ‘I Am Margaret’ in a dream whilst on retreat at a convent and the rest of the plot developed very quickly. It was definitely a ‘has to be written’ idea, and a lot of that was because of the faith element. I’d been writing books aimed at the mainstream market and was  increasingly frustrated at having to leave my faith out of them (faith doesn’t sell in the mainstream; at least it doesn’t in the UK). Faith was so integral to the ‘I Am Margaret’ plot that I decided to just write the book exactly as I would write a mainstream novel—but with the faith in.

Q: Out of all the secondary characters in the IAM books, how did you decide that Reginald (of all people!) was the next who needed his story told? How did you choose Kyle as protagonist?

A: Although Siege is a sequel to the whole series, I also see it very much as a sequel to ‘Brothers’ specifically. Kyle thinks a lot about his biggest fears in that novella, and in Siege he suddenly has to face them, and at a time when he no longer expects them. From that point of view, despite the long time gap between the chronology of the two books, it’s very much a continuation of ‘Brothers’. As for Reginald Hill, he’s been the main ‘bad guy’ of the series right from ‘I Am Margaret’. Although several ‘bad guys’ appear at the end of ‘I Am Margaret’, Hill was always (leaving aside Lucas Everington) the most well-developed and was the one who carried on through the series, making appearances now and then and threatening Margo and those she loves in various ways. And he really, really hates Margo (Full English Breakfast, Mr Hill?). So I didn’t consciously choose Hill, he was just the one who would do something like that, and the one who would be hardest for anyone to love.

Q: Any thoughts on what stories you might tell next in the IAM universe?

A: Next in the IAM universe I intend to publish a short story collection, but the main item in it is actually a novella called ‘A Saint in the Family’, which follows up on ‘The Siege of Reginald Hill’. I also have an idea for a novella or short novel about Luc Verrall, at the time of his eighteenth birthday, tentatively titled ‘Beyond the Wall’ but I can’t honestly say when I will be writing that. I really need to finish writing the ‘Yesterday & Tomorrow’ series!

Q: I find the surgery/torture scenes in the series really difficult to read. How do you write them? What do you hope your readers will take away from them?

A: I very deliberately avoid almost all graphic physical descriptions, and convey what is happening almost entirely through the reactions of characters or the dialogue. This leaves how ‘much’ the reader ‘sees’ largely up to the reader’s own imagination.  But I do get some readers with strong imaginations who seem to believe that there was a detailed, gory, graphic, blow-by-blow description, so it’s not a foolproof way of handling an unpleasant event.

They’re there for the dual purpose of putting the reader fully in the shoes of the main character and making sure they identify fully with what he/she faces throughout the book, and to highlight what many martyrs over the centuries have faced, what they (and maybe we) could face in the future, and what, indeed, in some form or other, many Christians are facing right now. I hope they will challenge readers in their faith, and make them think about what they would really endure for Christ. Is out faith more than skin deep?

Q: The SEIGE in the book is one of the Soul, and it makes for some powerful but very heavy reading. Was it tough to write? I felt the arc was very believable, which is immensely difficult to do with a storyline of this type, so kudos for that!

A: It was a harder book to write than usual, because I think I was writing very much from the deepest parts of me, and the book is very close to my heart as a result. The story really pulled me in and I lived inside it a lot of the time. However, it wasn’t as hard to write as ‘Three Last Things’, which I’m hoping to publish in the first part of 2019. That story ripped me to shreds inside—the Holy Spirit practically took my hands and forced me to write it. I love the resulting novella, but it was the most difficult two weeks of writing I’ve done in my life. Siege would be the second most difficult, and wasn’t anywhere near as bad.

Q: We’ve corresponded now about three novels and one short story of yours in which I’ve primarily focused on catching what we’ve termed “Britishisms.” It’s been pretty fun and enlightening to learn more about some of the cultural differences between our shared-language countries. Is there anything that has stuck out to you as particularly surprising or humorous? What has been the most difficult for you in managing clarity for two audiences like that?

A: The most difficult thing is actually when I pick up an American edition and see ‘Z’s’ and missing ‘U’s’. Still makes me wince, ha ha! It was a big surprise that I couldn’t find a completely equivalent word for ‘layby’. I had to pester my US test readers over that one, and ‘rest area’ or ‘shoulder’ was the closest we found. Then there were the ‘dry stone walls’ from ‘Mandy Lamb and the Full Moon’. Turned out they literally don’t exist in the States, and I had to go with ‘stone fence’. Sometimes when I make a word up translation is difficult, as well, and the US version ends up with something boring and official that’s in the dictionary instead.

Q: Speaking of Britishisms, can you tell us what the holiday season will look like for you over in the UK? What are some of your favorite Christmas traditions/songs/foods, etc?
A: In my family we like a real Christmas tree, never a fake, and a big one! We also tend to have goose, which is a more old-fashioned Christmas dinner. For most people the Christmas dinner of choice tends to be Turkey. Goose is juicer, though! We also have ‘pigs in blankets’ which are sausages wrapped around with bacon, and Brussel sprouts and satsumas are also synonymous with a British Christmas dinner. Perhaps we should re-name them ‘Brexit sprouts’ this year? Christmas crackers and party poppers and Amaretti Biscuits, which nobody likes, but if you roll the wrapper and set fire to it, it takes off and flies up into the air. Although, the other Christmas I confidently rolled and lit one to demonstrate to my brother’s in-laws, who had somehow reached the age they were without encountering this custom, only to have it burn down into a miserable puddle of ash on the plate. It turned out we’d bought a box made for the American market, instead of the Italian ones, and the wrappers had been changed. Health and safety gone mad, perhaps? Terrible disappointment, anyway! We actually considered taking them back for a refund! 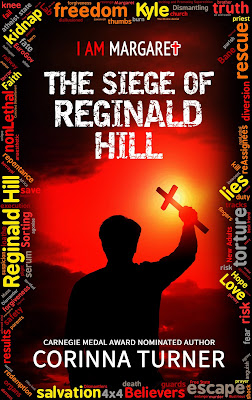 An odd surge filled my heart as I looked at him, sitting there in that chair: so old; so evil; so broken; so... alone. A warmth. A caring. A... love. I loved him. Just another poor sinner who need my care...
SAFETY IS NOT THE ABSENCE OF DANGER, BUT THE PRESENCE OF GOD.
Fr Kyle Verrall is living a quiet life as a parish priest in Africa when he’s snatched from his church one night by armed assailants. He’s in big trouble—his sister’s worst enemy is hell-bent on taking revenge on the famous Margaret Verrall by killing her brother, just as slowly and horribly as he can.
What could possibly save him? The humble young priest is defenceless—or so Reginald Hill believes.
But Kyle has a powerful weapon Hill knows nothing about. And he’s not afraid to use it.
Is Reginald Hill really the hunter?
Or is he the hunted?

Corinna Turner has been writing since she was fourteen and likes strong protagonists with plenty of integrity. She has an MA in English from Oxford University, but has foolishly gone on to work with both children and animals! Juggling work with the disabled and being a midwife to sheep, she spends as much time as she can in a little hut at the bottom of the garden, writing.

She is a Catholic Christian with roots in the Methodist and Anglican churches. A keen cinema-goer, she lives in the UK She used to have a Giant Snail called Peter with a 6½” long shell, but now makes do with a cactus and a campervan!

For reviews of "The Siege of Reginald Hill" and other behind the scenes goodies, check out the previous stops on the blog tour!

Great interview! I love learning about the quirky differences between American and British English!

And I cannot think of a single better way to ponder whether our faith is more than SKIN DEEP than through conscious dismantlement. Yikes!