Beauty and the Beast Costumes- Update 5

Here is another brief update! We have certainly accomplished more than what is pictured below, but I'm simply running out of time to take photographs! Anyhow, below you can see the nearly (but not quite) finished dress for Mrs. Potts: 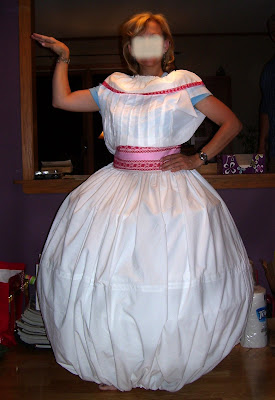 Here is a green dress we borrowed from a local high school, coupled with our own mob caps and frilly aprons. (Only one of the Silly Girls would be silly enough to wear an organza apron that is completely impractical!) 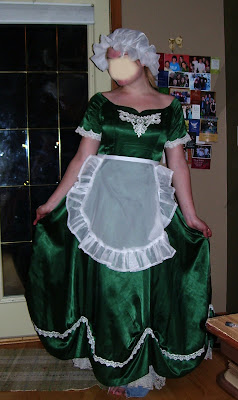 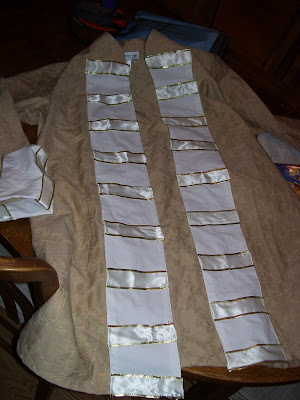 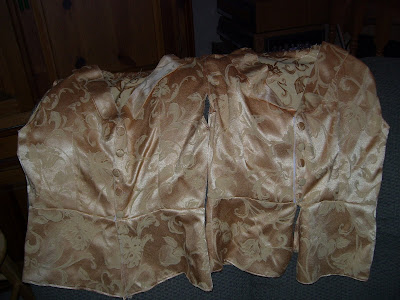 The show opens in 5 days!

Posted by Elenatintil at 2:05 AM

the costumes are looking great. Mrs. Pot's is awsome and I love the green dress you borrowed. I would so wear that.

The costumes look beautiful! Do you think you'll have pictures from the show itself at some point?

I admit I've never seen the animated 'Beauty and the Beast' but I looked up a clip of the original Broadway cast the other day (after I found out that Burke Moses, the original Gaston, is going to be Captain von Trapp in the Toronto production of 'The Sound of Music') and I thought it looked pretty neat! Certainly a lot of unique costume design opportunities!

Yes, I hope I will! It's going to be pretty amazing, considering that it takes place in a backyard!!!

The costume opportunities really are fascinating. I mean...a teapot? If I didn't have previous shows to use as a starting point, I'm sure I would have been quite stumped!

Today, for an instance, we were figuring out proper footwear for our Beast...post about that coming soon. Right now I'm going to go read "Breaking Dawn"!!!