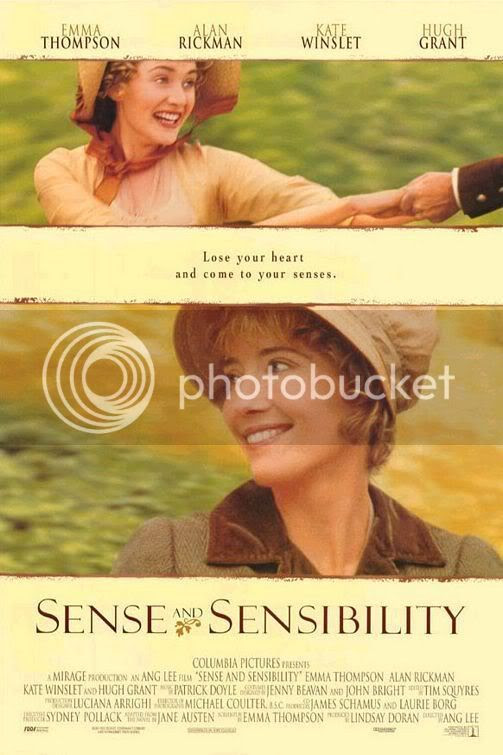 What am I doing reviewing such an old film? Hasn't every Jane Austen fan already seen it? What is the point of bringing it up?

The reason I write this is because I have come to see that this is one film that, though regarded as good family fare, is not truly appreciated for the gem that it is. It's a film that may take repeated watchings to fall in love with, but that is because it has a good deal more to it than first meets the eye.

I'll admit, the first few times I saw it, I didn't think it much out of the ordinary. I vastly prefer the books of "Pride and Prejudice" and "Emma" to "Sense and Sensibility" and my brain automatically assumed that the movie would fall into the same order of preferance.

My opinion started to change when I read the diaries that Emma Thompson kept during the shooting of the film. I began to see the craft and brilliance behind the film and was ready to look at it with new eyes. I realized that Thompson and the rest of the crew had pulled out everything that was good about this book, and worked to strengthen the weakenesses.

Last night I finally did watch it again and found myself savoring every moment. That is usually only a description I'd apply to Pride and Prejudice, so it astonished me to find the same beauty and perhaps even more depth of the heart within this older (and non-color corrected) film.

Though the book of "Sense and Sensibility" is one of Austen's earliests and not nearly as well crafted as her later works, in some ways it is even more accessible to ordinary young women than, say, Pride and Prejudice. Marianne and Elinor are not just dealing with the question of whether to marry for love or money, but with the question of "how does one conduct oneself when one is in love?" And that, believe it or not, is a question that every young person deals with. Do they show themselves richly enamored (as Marianne does) or remain guarded and aloof (like Elinor)?

The times may be differant now, but even though our society embraces the openness of Marianne, we also see Marianne's heartbreak and embaressment repeating itself over and over again in our young people.

We are also introduced to two unusual (for Austen) but also strangely accessible love stories. We see Elinor fall in love with a man whom she discovers is engaged to another. And like so many girls these days, she has to hid her emotions and force herself to be happy for her rival. Why? Because it is the correct thing to do. And Elinor does it without bitterness or jealousy. Not because she is a saint, but because she is sensible.

Then there is Marianne, who falls in love with a man who is good looking and charming, and holds her heart out wildly for him and all the world to see. But he is not Prince Charming (though Hollywood would say he should be) and rides off with money instead of love. Marianne is left heartbroken, very literally in the sense that she nearly dies because of it.

But there is still hope for her because of Colonal Brandon, a character who is admirable and honorable in every way. The sort of man that (again, by Hollywood) would often be shoved off as "the old guy" and seen unfit for our beautiful heroine. And yet in this story one cannot help falling in love with Brandon and wishing desperately that Marianne's eyes would turn from her unworthy but handsome Willoughby to the devoted and wise Brandon.

But more than the story, it is the Characters themselves who make this story memorable. And I find it truly a joy to watch the actors at work.

There is Emma Thompson who, though a good fifteen years older than Elinor is meant to be, plays the part of the older Dashwood sister perfectly. Kate Winslet (who is one of my favorite actresses) is a perfect romantic and beautiful Marianne.

Alan Rickman was brillantly cast as Colonal Brandon, and in my opinion there could be no better actor for the part. And even Hugh Grant as Edward manages to make that character much more likable than I found him in the book.

The supporting cast is extremly enjoyable as well. Having widened my viewing selection since the last time I saw the film, I have a new appreciation for the abilites of Imelda Saunton as Charlotte Palmer (well known for her work as Professor Umbridge in the Harry Potter series) and cracked up just about every time Hugh Laurie (Now the sarcastic Dr. House) came onscreen as her - yes, sarcastic- husband Mr. Palmer.

And beyond all this, it is simply just a well made film. The screenplay is extremely well done(I mean, Thompson won an Oscar for it!) and the Cinematography is really quite good.

And those, my friends, are the reasons why I found myself completely in love with this movie at last.
Posted by Elenatintil at 10:10 PM

Good review, Elspeth. :) I'm glad you've joined my side now (without realizing it, though, haha). I've been in love with this movie since the first time I saw it. And I rather liked Sense & Sensibility in book form as well. I was 11 when I read it and not very critical...which I think was good. I would like to re-read it sometime and see what I think now that I'm older and have read so many more truly good books. Ah, but my list of books to read is already extensive. :P

Anyway--very well put and such. And I absolutely love Mr. Palmer, too. :)

I love this movie too - I think it's the best feature-film-length Austen adaptation, and it's one of my overall favorite movies.

The Other Katie said...

Nice review! I pretty much agree all around, although I've never been a big Edward fan.
But you didn't mention Willoughby... jerk though he is, he shouldn't be left out. I think Greg Wise is the perfect Willoughby! Much better than the guy in the 2008 movie.

And Mr. Palmer is hilarious!

I'll chime in as the token guy who also liked that film version (and happens to own a personal copy). ;)