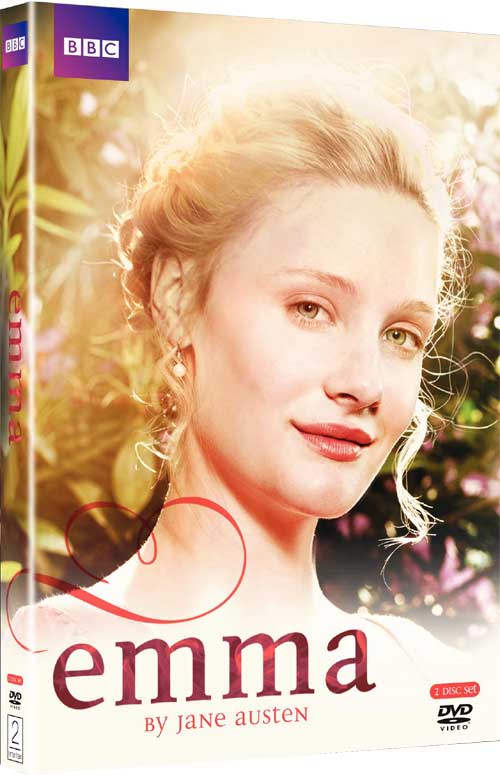 Having produced an excellent version of "Sense and Sensibility," the BBC decided to try their hands next at creating what I'm sure they hope is the definitive version of "Emma."

The question remains... is it?

We've survived for years on the Kate Beckinsile and Gwennyth Paltrow versions, which both contained glaring flaws. Those flaws differed for everyone, but my personal peeves were the horridness of Mark Strong as Mr. Knightley (he's a brilliant actor but a terrible Knightley) and the failures of Paltrow to really portray Emma. On the technical end, Paltrow's version had a script that tried too hard to be funny, and Beckinsile's version suffered from poor production values.

I did, however, approve of Beckinsile as Emma, and Jeremy Northam was and always will be my Mr. Knightley.

The new "Emma" starring Romola Garai and Johnny Lee Miller is perhaps the overall best version of the story so far. Romola Garai is a very nearly perfect Emma, and the supporting cast was strong. The production values are absolute beautiful, with 98% of the cinematography ranking up there with regular film quality (There are a couple of glaringly "BBC-wince-worthy" shots that keep the production anchored in the BBC Miniseries world).

It's delightful to see all the characters receiving proper screen time - especially Jane Fairfax. However the most delightful expansion has to be the character of Mr. Woodhouse. For this role the production was able to secure the magnificent Sir Michael Gambon (most recently known for Dumbledore of Harry Potter) and treated this honor with respect by giving us a better understanding of why Mr. Woodhouse is a paranoid worrywort about health matters. I deeply appreciated this and think this may be one of the most respectful portrayals of a silly Austen character we've had yet.

On the opposite side, I liked what they did with Miss Bates up until the very end, where they then forced her character into a silly position that I feel Mr. Knightley would most heartily disapprove of.

The locations were beautiful, and the costumes gorgeous. Indeed, I'd be hard put to choose whether I like the S&S costumes any better than these (and I loved the new S&S costumes).

The script was quite good, although a couple of my favorite lines were dropped which I was not at all pleased with. I would have preferred to see the brilliant Andrew Davies (1995 P&P and 2008 S&S) as the screenwriter, but alas, that cannot be changed at this late date. ;)

And then there is Johnny Lee Miller as Mr. Knightley. While he was better than I expected, he still could not knock Jeremy Northam off his pedestal, and so Miller is going to have to be satisfied with second place in the Mr. Knightley category.

Is this going to be the definitive Emma? I don't know. It's quite long, and I think that works against it rather than for it. As Romola Garai is the strongest actress we've had yet in the title character, I think this version will survive well.

But I don't think it's impossible that in another five years we won't see an attempt at a theatrical film. There is still room for improvement.
Posted by Elizabeth Amy Hajek at 12:05 PM

I love this version of Emma! And Romola Garai was the perfect Emma! Seeing as I have not read the book I can't compare it to that but I can compare it to the Gweneth Paltrow version...and I think this is way better!!!

I do agree that Jeremy Northam makes the perfect Mr. Knightley. I also liked the 2009 version of Emma very much - except for Romola Garai. I don't know why people like her as Emma.

I found her excruciatingly painful, from her facial expressions (seriously bugged-out eyes), through her acting (far more overdone than Gwyneth Paltrow ever was), to her body language (much more appropriate for a twenty-first century college student than an eighteenth century rich young lady).

It seems to me that the whole key to Emma's character is that she thinks she is: beautiful, elegant, and far superior in intellect to anyone around her except Mr. Knightley - and (in her opinion) she knows far more than he about love and marriage. Beauty is in the eye of the beholder, so I won't tackle that part. Due largely to the director, Romola Garai flunks the other aspects. She is not elegant, and she acts (and looks) stupid almost all the time.

In short, I would prefer to fight Gollum in hand-to-hand combat than watch Romola Garai play Emma. There. Sorry for my long rant, but I had to get that off my chest!

~Hydra
From Books to Movies and Back Again
(hydrabooksandmovies.blogspot.com)

I just watched this so I had to go back and see what you said about it...since I did vaguely recall a post. ;D

I Loved Mr knightley, emma, mr woodhouse... it was soooo good and I liked it much better than the other versions I've seen. =)

what silly position was miss bates forced into? =/

and I must say I think RG was a perfect emma. ;D