And Then I was Hufflepuff: A Sneak Peek at Pottermore 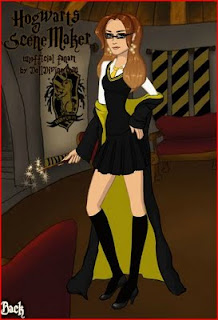 Yesterday I finally opened up my e-mail to see that I'd been allowed into Pottermore. I quickly logged in and started navigating my way through the story. While there wasn't quite as much new information as I would have liked, I will say that the graphics are gorgeous and I am looking forwards to playing the games that they have.
The wand sorting was pretty fantastic. My wand is Maple, with Phoenix feather core, 13 and a half inches long, and surprisingly swishy.
You'll have to join Pottermore to get your own wand and learn about all the woods and cores, however, I will give you a sneak peek by sharing the information about my wand wood and core! :)
(Image not from Pottermore, merely illustrative)

This is the rarest core type. Phoenix feathers are capable of the greatest range of magic, though they may take longer than either unicorn or dragon cores to reveal this. They show the most initiative, sometimes acting of their own accord, a quality that many witches and wizards dislike.

Phoenix feather wands are always the pickiest when it comes to potential owners, for the creature from which they are taken is one of the most independent and detached in the world. These wands are the hardest to tame and to personalise, and their allegiance is usually hard won.

Pretty neat, yeah?
The woods are even more particular:

I have often found that those chosen by maple wands are by nature travellers and explorers; they are not stay-at-home wands, and prefer ambition in their witch or wizard, otherwise their magic grows heavy and lacklustre. Fresh challenges and regular changes of scene cause this wand to literally shine, burnishing itself as it grows, with its partner, in ability and status. This is a beautiful and desirable wood, and wand quality maple has been among the most costly for centuries. Possession of a maple wand has long been a mark of status, because of its reputation as the wand of high achievers.

And there are many more woods than cores, so you have a lot of exploration and reading ahead of you! Plus I haven't said a word about length... it's not just based on how tall you are!
But of course, what I was really looking forwards to was the sorting! The questions were rather different than I expected, but they made sense. On some of them I could have gone either way, but I must have ended up choosing fairly consistently. I expected that I'd be a hatstall, since I have qualities that would fit me into Gryffindor, Ravenclaw, OR Slytherin.
The Sorting Hat, however, had other ideas because it triumphantly placed me in Hufflepuff.
HUFFLEPUFF?
I was stunned. I had not for a minute considered the possibility that I would end up in Hufflepuff. What on earth happened?
Then I started to read about the house, and the new information from JK really shed new light. It's not that Hufflepuff House is stupid, or unachieving, it's that they are very modest and they don't go bragging about their achievements all over the place (Gryffindor, I'm looking at you).
I thought about the way I'd answered the Sorting Hat questions, and realized that I'd consistently placed the welfare of people and a love of nature above ambition, glory, and knowledge. And it's true that I have a very strong moral sense that really becomes apparent when you ask me the hard questions.
And, as I thought about it, I realized that being in Hufflepuff House really was a compliment. Would I really want to be in another house, where there would be indications that I consistently chose to put other things above people? Or where I had a love of human creations above that of God's?
This isn't a reflection against the other houses because I would have been happy in any of them. It's just my own personal journey towards appreciating -- really appreciating my inner Hufflepuff.
To help spread the word of truth about my new house, I'm sharing the Welcome Letter with you all below. I've put some of my favorite bits in bold...

Congratulations! I’m Prefect Gabriel Truman, and I’m delighted to welcome you to HUFFLEPUFF HOUSE. Our emblem is the badger, an animal that is often underestimated, because it lives quietly until attacked, but which, when provoked, can fight off animals much larger than itself, including wolves. Our house colors are yellow and black, and our common room lies one floor below the ground, on the same corridor as the kitchens.

Now, there are a few things you should know about Hufflepuff house. First of all, let’s deal with a perennial myth about the place, which is that we’re the least clever house. WRONG. Hufflepuff is certainly the least boastful house, but we’ve produced just as many brilliant witches and wizards as any other. Want proof? Look up Grogan Stump, one of the most popular Ministers for Magic of all time. He was a Hufflepuff – as were the successful Ministers Artemesia and Dugald McPhail. Then there’s the world authority on magical creatures, Newt Scamander; Bridget Wenlock, the famous thirteenth-century Arithmancer who first discovered the magical properties of the number seven, and Hengist of Woodcroft, who founded the all-wizarding village of Hogsmeade, which lies very near Hogwarts School. Hufflepuffs all.

So, as you can see, we’ve produced more than our fair share of powerful, brilliant and daring witches and wizards, but, just because we don’t shout about it, we don’t get the credit we deserve. Ravenclaws, in particular, assume that any outstanding achiever must have come from their house. I got into big trouble during my third year for duelling a Ravenclaw prefect who insisted that Bridget Wenlock had come from his house, not mine. I should have got a week of detentions, but Professor Sprout let me off with a warning and a box of coconut ice.

Hufflepuffs are trustworthy and loyal. We don’t shoot our mouths off, but cross us at your peril; like our emblem, the badger, we will protect ourselves, our friends and our families against all-comers. Nobody intimidates us.

However, it’s true that Hufflepuff is a bit lacking in one area. We’ve produced the fewest Dark wizards of any house in this school. Of course, you’d expect Slytherin to churn out evil-doers, seeing as they’ve never heard of fair play and prefer cheating over hard work any day, but even Gryffindor (the house we get on best with) has produced a few dodgy characters.

What else do you need to know? Oh yes, the entrance to the common room is concealed in a stack of large barrels in a nook on the right hand side of the kitchen corridor. Tap the barrel two from the bottom, middle of the second row, in the rhythm of ‘Helga Hufflepuff’, and the lid will swing open. We are the only house at Hogwarts that also has a repelling device for would-be intruders. If the wrong lid is tapped, or if the rhythm of the tapping is wrong, the illegal entrant is doused in vinegar.

You will hear other houses boast of their security arrangements, but it so happens that in more than a thousand years, the Hufflepuff common room and dormitories have never been seen by outsiders. Like badgers, we know exactly how to lie low – and how to defend ourselves.

Once you’ve opened the barrel, crawl inside and along the passageway behind it, and you will emerge into the coziest common room of them all. It is round and earthy and low-ceilinged; it always feels sunny, and its circular windows have a view of rippling grass and dandelions.

There is a lot of burnished copper about the place, and many plants, which either hang from the ceiling or sit on the windowsills. Our Head of house, Professor Pomona Sprout, is Head of Herbology, and she brings the most interesting specimens (some of which dance and talk) to decorate our room – one reason why Hufflepuffs are often very good at Herbology. Our overstuffed sofas and chairs are upholstered in yellow and black, and our dormitories are reached through round doors in the walls of the common room. Copper lamps cast a warm light over our four-posters, all of which are covered in patchwork quilts, and copper bed warmers hang on the walls, should you have cold feet.

Our house ghost is the friendliest of them all: the Fat Friar. You’ll recognize him easily enough; he’s plump and wears monk’s robes, and he’s very helpful if you get lost or are in any kind of trouble.

I think that’s nearly everything. I must say, I hope some of you are good Quidditch players. Hufflepuff hasn’t done as well as I’d like in the Quidditch tournament lately.

You should sleep comfortably. We’re protected from storms and wind down in our dormitories; we never have the disturbed nights those in the towers sometimes experience.

And once again: congratulations on becoming a member of the friendliest, most decent and most tenacious house of them all.

Posted by Elizabeth Amy Hajek at 11:43 AM

So cool! I was sad that I didn't get into Pottermore early. I will get in as soon as I can though. :) And I think that you got in Hufflepuff is kinda cool.

Hi! I just recently started following your blog and i love it! I'm on pottermore too but in Ravenclaw :) I wasn't sure if you had read the other house letters so here's the link. I thought they were all really good.
https://www.facebook.com/Pottermore.house.letters

Oh, I love this! I'm about halfway through the first HP book (FINALLY!), and I am already a fan. :D Pottermore is something I'm going to have to check out...it sounds awesome.