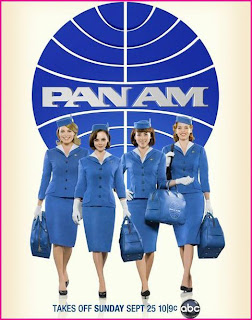 Imagine a time when regular airplane travel was still new. When the idea of zooming through the air was terrifying and strange. When Pan Am Airlines decided to encourage and lure in more travelers by creating the perfect stewardess. A classy, elegant lady with a reassuring smile and a kind voice ready to fetch whatever you need.
ABC's new show, Pan Am, tells the story of four of these stewardesses and the rest of the crew on their jet. These spunky young women represent a wide demographic of the changes going on during this period.
Maggie is stubborn, sassy and full of spunk, the girl you call at the last minute when your regular doesn't show up.
Collette is French, sophisticated and charming, capable of handling any situation with grace.
Laura is naive, shy and the new face of Pan Am after a LIFE photographer snapped her face and got it on the cover of the magazine.
Kate is Laura's big sister, capable, determined, adventurous, and with a huge heart for helping others. Oh, and she's also a courier for the CIA.
And while the core cast spotlights the women, the pilot (Dean) and co-pilot (Ted) are great supporting characters as well and add some masculine interest to the show.
The show is about relationships, politics, intrigue, and social change. It has wonderful characters, great writing, beautiful cinematography, and fantastic costumes (see my sewing blog for more about the Pan Am costumes!).
It also has gorgeous locations, with episodes taking place in London, Paris and Berlin so far.
I started watching the show skeptically, but was absolutely blown away by how good it has been. So far it's been the strongest premiere of the year, and I'm including the summer shows in that statement as well. I can't wait to see where it goes and I highly recommend it!
As far as appropriateness goes -- there has been a total of one implied sex scene and one inappropriately behaved passenger. Both situations involved appropriate consequences and were discretely handled. Kids won't be interested in the show because it's written for adults, but as far as adult shows go, it is very clean.
Posted by Elizabeth Amy Hajek at 1:50 PM

I LOVE Pan Am! So glad someone else watches it, it seems like whoever I mention it to has never heard of it before. :)

And I think that the costumes and the old music are some of the best parts of the show. :)

I know! It isn't nearly well enough known! I've been recommending it enthusiastically and so far have gotten several friends to check it out. They all love it. So keep talking about it and eventually we'll convert them all!

I just recently started watching this show, and despite all corniness, I love it. THE DRESSES! Also, it has some pretty great characters - though I was hoping for a bit more diversity.
Also just finished watching the first season of Downton Abbey. I think the cast is brilliant, and I'm so looking forward to season 2. Also, did you notice that actress that plays Mathhew Crawley's mother is Doctor Who's Harriet Jones?

Finally: Have you taken a look at Terra Nova? I'd love to know your opinion on it.