"Once Upon a Time" ends season 1 with a bang! 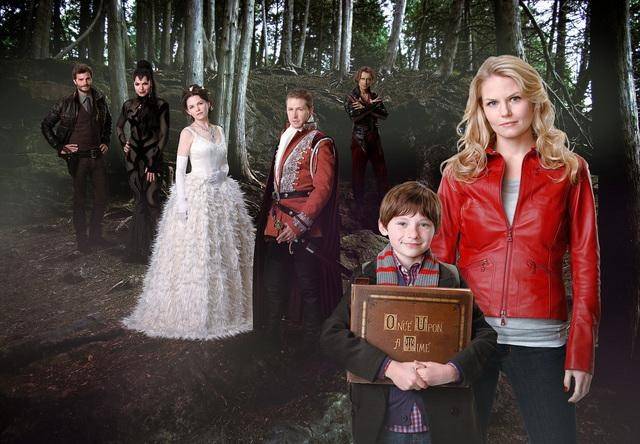 After a slow middle, ABC's new hit amped up the plot and suddenly each new episode was better than the last - and they started breaking expectations and surprising us too. While I had some good ideas about the finale, it actually managed to surprise me - so much so that by the time it ended, my sister and I stared at the screen with dropped jaws for two full minutes before trying to say anything. (And I do mean 'try' because I was completely incoherent in my attempt to verbalize my emotions).

Sending Henry to the hospital was intensely important to developing this episode. It gave Emma the catalyst she needed, but also allowed a chance for some supremely powerful acting on the part of Regina, as we saw the anguish on her face as she watched her son dying.

Then we learned there's a dragon under Storybrooke. A dragon? Really? What? In a sequence that looked an awful lot like a video game, we got the cool effect of watching Emma's fight cut in with her father's fight with the same beast 29 years previously. Talk about kick ass!

And then Emma breaks the curse by kissing Henry on the forehead and it's a beautiful parallel - and also a nice twist to the conventional romantic kiss typically employed in such situations.

But by far my favorite moments in the episode were when Gold first sees Belle - and when she remembers him. This is why the Rumbelle ship has been the most popular, most beloved, and most gutwrenching of all the OuaT ships.

And then Gold had to spoil it all by bringing magic back.

What. Gold. Why. You have Belle. You're in the land where your son...

Is this why he wanted magic back? To find Bae? Or can he just not stand not being the most powerful being around? Has he still not learned his lesson?

Guess we'll have to wait until season 2 to find out. Also on hold until September is the revelation of whether August survived, who Dr. Whale actually is, what happened to Bae, and whether the fairies will start flying again.

Should be a stellar season, as there are plenty of new possibilities for plot direction, and rumors of a certain Little Mermaid making an appearance.

Dr. Whale as Bae would be a twist I wasn't expecting and yet it is an intriguing thought. I'm curious why you think this may be the case. Dr. Whale puzzles me and I can't figure out who he is. For a while I though he was the wolf but I was wrong there. Dr. Whale's identity is one of the questions I'm looking forward to having answered next season.

I don't think it's extremely likely as I'm pretty sure Bae will come from outside of Storybrooke... however... Dr. Whale would be about the right age, and he doesn't have a fairy tale identity yet. Also, he's a doctor, and that's the sort of profession I feel would fit with Bae's sense of compassion and justice. Also he had a crush on Snow, and I can just see Bae having a crush on Snow! But his hair is probably too light.

I seriously cannot wait until season two. Next to Doctor Who, Once Upon a Time is my favorite show. I almost cryed when Gold realized that Belle didn't remember him, because of the curse. I thought it was really sad :(

Also, I have a feeling the maybe Gold is making a new world, so he has his son back and he is in charge. Maybe, haha

I had a really long comment...so I posted it on the forum. lol! But I do have to say: WOW! That's a pretty cool thought..or *thoughts*. ;)
I have an idea! I say that you, Elena, go and get hired on as one of the writers! You would be SO good! XD

HA! Well thank you, Hannah! I would like to do some TV scripts at some point in the future... maybe if OuaT keeps going, I'll get the chance!