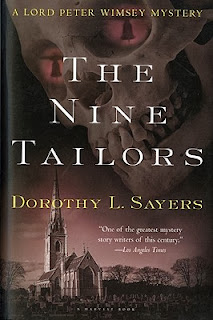 My copy of this book had nothing about churches or bells on the cover, so you can forgive me for thinking it might have something to do with sewing. I mean, it's Dorothy Sayers and it's a Peter Wimsey mystery, but the word "Tailor" on the cover is certainly what made me choose to purchase this title over any of the others in the store.

It has nothing to do with tailors. Or sewing. Although clothes do figure rather prominently in unraveling the mystery.

Rather "The Nine Tailors" refers to the old English practice of ringing out the "Tailor" bell nine times when a man passes away. When an anonymous corpse is discovered in someone else's grave, a sleepy country village has to ring the bells for this stranger, and call on Lord Peter to solve a murder that grows more sinister with every turn.

Still, I found the novel to be deeply intriguing despite the lack of needles and chalk. I know very little about the English art of bell ringing and the book made the whole mathematical music deeply intriguing.

And the mystery! While I figured out one important aspect very early on, there were still plenty of other pieces to be surprised with. Plus, like any Sayers novel, the mystery is but the framework in which an investigation of human nature is launched.