"Cinder" - when a Fairy Tale is Post-Apocalyptic 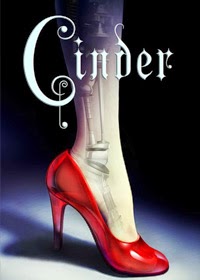 Usually I'm the one recommending books to my sister, especially if they are of the science fiction variety. So when Carolyn told me last week "I'm reading this book that's a post-apocalyptic retelling of Cinderella who is a cyborg and it's REALLY GOOD" I thought "How did you hear of this and I didn't?"

Then I saw the cover and realize that I have seen it pop up here and there, I just never looked at it closely enough to catch the science fiction elements. Let's be honest, when you're scrolling past thumbnails, what sticks out to you isn't the ghostly mechanical bones, it's the bright red shoe. This makes it easy to write off as "just another fairy tale retelling of Cinderella" and move on. Which is a real shame because "Cinder" by Marissa Meyer is something special.

Cinder is the best mechanic in New Bejing, but she has a secret - she's a cyborg, and in her post World War IV society, cyborgs are lower class citizens. In fact, they're so despised that they're forced to be test subjects for the scientists racing to find a cure for the worldwide plague. But when her stepmother hands her over to the testing program, Cinder finds herself caught up in a conspiracy that goes beyond our atmosphere.

I woke up at 4:00am yesterday and couldn't get back to sleep, so I picked up this book for $2.99 on Amazon and couldn't put it down. Two hours later I was 60% of the way through this 400 page book and had to force myself to get some more sleep. Last night I finished it and rushed on to the next book of the series, which brings in Little Red Riding Hood alongside the existing cast (she's a French farm girl in a red hoodie and she rocks).

Oh yeah, it's a series. And thankfully book four just came out, because I'm enjoying "Scarlet" just as much as I did "Cinder" and according to my sister, book three is just as good. Let's see if I can make them last until the end of the week!

Meyer's writing is tight, her plot is action packed, her characters well-rounded, and her mysteries intriguing (book one I could predict, but book two is more mysterious). It is definitely one of the best Fairy Tale retellings I've read and should be enjoyed even by fans who don't normally venture into the Science Fiction genre (If you can handle the Hunger Games, you can handle the science here).