"Enchanted, Inc." It's almost magic to get a story this fun... 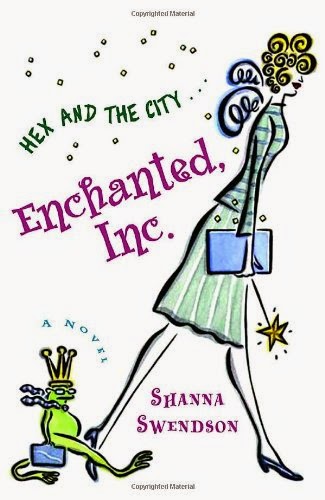 When my friend and editor Matthew Bowman recommends me a book, I've learned to trust his suggestions. That's why when he sent me a preview of his review for "Enchanted, Inc," I snapped up the e-book, even though I did not yet have time to read it.

Well I picked it up early last week and due to having plenty of reading time with another weekend illness, I found myself whipping through books 2, 3, 4, and 5 over the weekend (I'm currently nearly finished with book 6). Safe to say that this series was a spot on recommendation!

Katie Chandler is an ordinary girl with a boss so nasty that it's all she can do to keep sane during the workday. However she soon finds out that her very ordinary-ness makes her a desirable asset for a mysterious company...

You see, Katie is not just ordinary, she's an immune, which means that she not only has no capability for magic herself, she isn't even susceptible to the illusion and cloaking magic the fairies, gnomes and wizards of New York City use to keep their wings and spells under wraps from the mundane population. This makes her valuable to MSI, inc, the "Microsoft of the Magical World" which needs these "immunes" to check up on what addendums their associates might be slipping into contracts.

However, our heroine soon finds herself wrapped up in the magical power-struggle of the company, and on a journey which involves all manner of mythical creatures, spells gone wonky, and epic quests, not to mention good ol' romance and comedy.

"Enchanted, Inc" and its sequels merge the best of chick lit and urban fantasy. There's humor, memorable characters, and a romance more endearing than cliche'd. Furthermore, it's quite wholesome, in the best way. There are no sex scenes, nor long descriptions of rippling biceps or hot make-out scenes (although there are some memorable kisses!) I actually highly suspect that author Shanna Swendson is a Christian, as her characters regularly attend church (a background feature of the novel, this is not at all a religious book) and the hero and heroine more or less live lives pretty consistent with a Christian worldview (Katie has had sex previously, but it is such a little thing in the past that it feels more like the author trying to be culturally relevant than otherwise).

All of the books are available for under $5 at Amazon, although they're a little on the short side so if you're not in the habit of rereading books, you might prefer to pick them up from the library. Although they were more than I usually pay for books of that size, I will be rereading them and am quite happy to have them conveniently stored on my Kindle.

And while this is obviously a female oriented series, it shouldn't have escaped your notice that it was a dude who recommended this to me. Chick lit with cross gender appeal? Just another reason why this series is a winner.
Posted by Elizabeth Amy Hajek at 11:15 AM