The Secret of the Fast and Messy First Draft 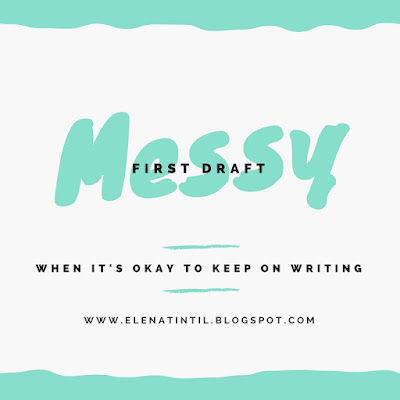 I hate messy first drafts. Well, hate is a strong word. They can really 'bug' me, you know? From what I've observed, I'm hardly unique in this aspect. In fact, being perfectionist about one's first draft can be one of the biggest hindrances keeping an author from finishing their novel!

Guess what? This year I am writing my messiest first draft ever--and it is going okay!

Here are the stumbling blocks that have been tripping me up and wasting my time in the past:


1) Inconsistency. When changing a fact later on in the novel, it is really annoying if I don't go back and rewrite all of the relevant passages immediate. This isn't necessarily a bad thing, you just have to make sure you don't go down too many rabbit trails with it. If it just requires a few 'find and replace' actions, I totally do it. But if it requires some actual rewrites, I'm trying to let that go for now. I'll leave a comment in the margins to remind myself to fix the aspect, but right now my goal is to actually get the first draft finished. This is important because discoveries later on in the manuscript can render the earlier change unnecessary and the time spent implementing it wasted.

Let me be clear: my advice here is not "write first, fix later." It is "write first, polish later." Which brings me to my second stumbling block:

2) The Gut Warning. I have a 'wrong' feeling about the novel that I think is because it is not very good and needs more fine tuning, but is actually because the plot isn't working. And here is where I really do have to stop and rethink matters, because pushing forward when I have this bad gut feeling has always always proved to be the wrong decision for me.

So what is different this time around? Well...technically this isn't my first draft. The large part of what I'm writing is a first draft, because I'm expanding 40k words into an estimated 100K+ words. Because I wrote the short story version of this tale that had all of the main story beats in it, I knew that the flow and characters worked and I also knew what aspects I needed to focus more on the expansion write. I have the freedom to write fast and messy because I am not feeling the story out as I write. Sometimes something doesn't work and I do have to stop and redo a section, but for the most part, everything is working. It's rough, it needs edits, but it is a solid framework.

"But Elizabeth! That's still a second draft! So you're cheating with your post title!"

Well . . . maybe. But "Messy first-and-a-half draft" doesn't sound great, and what I'm doing now is really not what most writers would think of when they hear the words "second draft." Over 50% of the draft I am currently working on will be completely new scenes.

In some ways, I guess I see my 40k 'first draft' of "The Professor and the Siren" to be a really really expanded plot synopsis. Because it was originally conceived to be a short story/novella, my plot outline was just one page. However, when I outlined "The Mermaid and the Unicorn," I got nearly 10k down (if I recall correctly). Although the book did evolve, much of the final story remains very true to the core beats of that first plot outline. It was a lot of work to do up front, but it really helped tremendously when it came to allowing me to write. I knew where I was going and I wasn't held back by second guessing.

That said, at times the extensive and tightly written plot outline for "The Mermaid and the Unicorn" felt restrictive. Although the 40k for "The Professor and the Siren" is actual narrative and not outline, my work right now feels free, as I am actively developing completely new scenes, characters and subplots. Turns out, I really really love expansion. I get to explore the world and characters I've created within the safety of a narrative flow that I already know works.

Is this going to radically change my writing process for the next book? I'm honestly not sure. It may be that this method is a one-off that worked for this particular story...or not! I'm both excited and nervous to find out what I end up doing for "The Selkie and the Queen" . . . but I can't let worrying about that distract me right now. No bunny trails, remember?

If you are wondering why I haven't posted much this month, it is because a) I've been writing a TON on "The Professor and the Siren" and b) I've been doing two reviews for "Beauty and the Beast." The Costume review is up on my sewing blog, while the movie review will be coming soon--watch this space!

Meanwhile, you might enjoy reading:
Tracking Set-Up and Pay-Off
Write Like a Job
2017 Writing Process Thoughts
Why I am Writing for a Catholic Publisher (When I'm not Catholic)
So... NaNoWriMo. Yes or No?
Reflections upon the Completion of NaNoWriMo
NaNoWriMo: Scary and Freeing

I'm glad that the writing is going well! I am SO EXCITED to see how you've expanded and developed the story!!!!