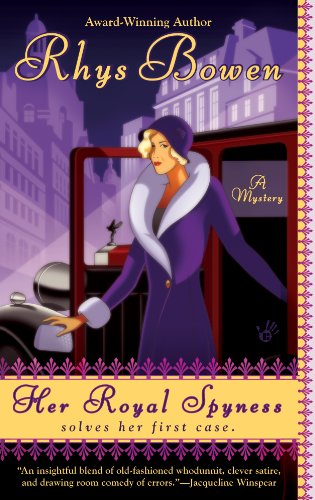 Wow, I can't believe I haven't blogged about "Her Royal Spyness" yet! I was certain that I had, and yet, when I tried to find a review to go with the announcement that the kindle was on sale ($1.99 on Amazon), I came up with nothing!

I think this is because Matt, the Novel Ninja, who got me into the series, wrote such a good review that I felt anything I did would be completely redundant. Which is still largely true--but since I've gone and read the whole series twice now, and actually own all of the books in one form or another, I'd be remiss if I didn't take the time to personally recommend the series to you all.

Although the delightful heroine, Georgie, is a fictional distant member of the royal family, the series is strewn with excellently executed cameos of real historic figures. I particularly adored the appearances of Coco Chanel and Queen Elizabeth II (as little Lillibet).

There's some innuendo throughout the series, nothing tremendously over-the-top, but I'd still say this is an adult series, and even that will depend on personal taste. Georgie's personal opinions on sexuality are refreshing, however (Again, Matt's review goes into more detail about this, so I won't be repetitive here.)

So, even if your summer reading docket is full, take advantage of the kindle sale because normally the ebook is upwards of $7.00!