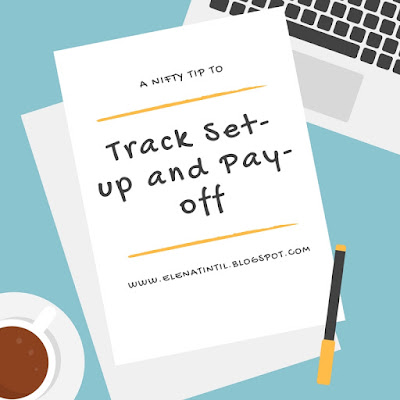 There is one major rule that all good jokes and stories have in common: the three beat set-up and pay-off.

What this means is in a story or a joke, you foreshadow a situation twice before paying it off with the third mention. Think of your favorite joke - how many times is the humorous bit repeated? Usually three times, with the third time leading to the punchline.

Within a long novel, a complicated plot thread may end up getting set-up more than twice before it is paid off. This is okay. It shouldn't be overdone, but in a longer story you may need a tad more repetition to keep the element within the reader's mind. A good set-up is a memorable detail that sticks in the reader's mind for it' original place within the story. Only later, at the pay-off, does the reader usually  realize that the initial two mentions were setting up something bigger in the final act.

(Since this is Harry Potter Anniversary week, I'll mention that J.K. Rowlings, whatever her other faults, is pretty masterful with her set-ups and pay-offs. Keep an eye out for them next time you read through the series!)

Many big items will likely be mentioned in the initial outline of your work, and you'll know from the get-go that you need to work in a few mentions of a character, place, object or technique before it really comes into play in the third act. However, sometimes you develop a set-up or pay-off later on in the writing process. Perhaps in the third act you insert a weapon that you realize wasn't foreshadowed at all. Or maybe as you are writing the second act, you create a set-up that you need to make sure to pay-off later.

Now, you could go and write the other two thirds of the sequence immediately. However, this takes time, and time is money! I have found a really nifty way to keep track of set-ups and pay-offs that come up that saves a lot of time.

Enter the Microsoft Word Comment feature. Hopefully you are already aware of the feature, as it is invaluable for communicating with editors and alpha/beta readers. However, for those of you that don't, it can be accessed under the review pane of your toolbar. Just highlight the section of text you want to leave a comment on, and hit "New Comment."

Anyhow, I like to use the comments to communicate with myself as well. Often I'll include citations for facts in case they get called into question later, or I'll remind myself to verify a spelling or usage of a foreign language. Lately, as I've been working on my fast and messy draft 1.5, I've been utilizing it to mark set-up and pay-offs as they pop up, so that I can deal with them in edits rather than right now when I'm trying to just get the whole story down. Sometimes I will include specific ideas and intentions, other times I'll just note "set-up!" or "Pay off!"

The other benefit of this technique is that you can used the "Advanced Find" tool to search only your comments for uses of "set up" and "pay off" to quickly deal with them in editing.

Interesting in reading more of my thoughts on writing?
Posted by Elizabeth Amy Hajek at 11:48 AM