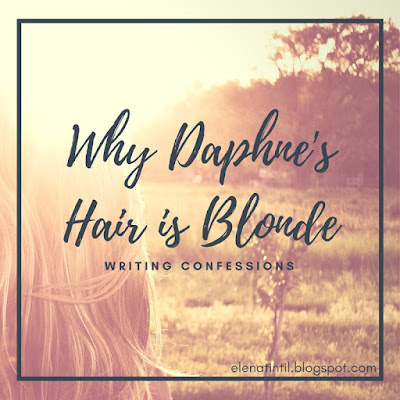 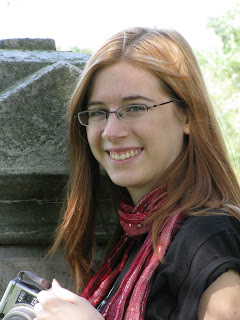 I love my natural hair color now (see profile picture at right), and happily my husband does as well. But I still wish more novels gave medium brown the same sort of love that they give other colors!

Obviously I'm not yet helping to solve the problem. My first book featured a blonde, my second has a heroine with nearly black hair (although the hero has medium brown!), and the third will of course feature a redhead. I didn't intend to fall into the dramatic heroine hair color trope, it's just that the characters that most interested me from the first book turned out to be the ones with dramatic hair colors already!

To be fair, the heroine of my very first finished novel (unpublished), did have ordinary brown hair. However, moving forward, I wanted to get away from heroines that were too much like me. I want my characters to stand on their own feet, not appear to be avatars of myself. Still, I plan to pass around some medium brown love in future novels ;)

It's been five years since Matt and Regina and I started stirring the pot that would eventually result in "The Mermaid and the Unicorn" so I cannot say with certainty how every little detail originated. However I do recall that Daphne's hair color came about in part because of the Fairy Tale Novels.

For those of you not familiar with the series, they feature modern day retellings of magical fairy-tales without the magic. The author of the books was the aforementioned Regina, my writing mentor and friend, and she took a little flack from fans for never featuring a blonde heroine--but often featuring blonde villains. Now the situation got a little exaggerated, and I completely understand how Regina chose the physical descriptions for each of her leading ladies (source material requirements or ethnic genetics), but I continue to find the fan hype about it rather hilarious. So when I had a chance to write a novel that was originally going to be published by Regina's company, I thought. "Ah ha! My chance to get a blonde heroine out there for this fans!"

Of course, in the end I handled the publication myself, and Daphne and her hair color suited each other extremely well apart from any fan nods.

The real irony of the story is that when my husband did his first read-through of the novel, he entirely missed the fact that Daphne was blonde and Maddie was brunette. He thought it was the other way around. I definitely made a few changes in the next draft to make sure that the hair situation was crystal clear!

What hair descriptions in books stand out to you? Tolkien, for instance, gives his ladies either dark or light hair -- Middle Earth seems largely populated by raven locks and golden tresses. Robin McKinley's "Beauty" is one of my favorite books, but I've never been satisfied with how all the sisters originally had medium brown hair, but then each of theirs changed into a more "properly dramatic" shade (one sister's hair turned golden which I think is hogwash because I've never seen brown hair turn lighter in the teen years unless someone goes prematurely gray!). And, of course, I'm a huge comic book fan where dramatic hair is all the rage (Rogue fans represent!).
Posted by Elizabeth Amy Hajek at 2:58 PM