Life Changes that WORKED in 2017 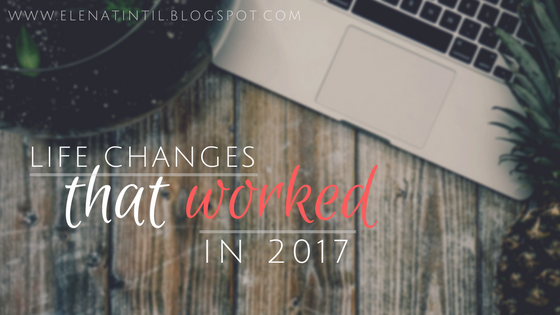 Despite the fact that nothing actually *changes* other than the calendar flipping over, December 31st and January 1st have become ingrained in our culture as times of reflection and resolution. It's growing more common for bloggers to devote posts specifically to this subject. I've never particularly liked making public resolutions, especially with how my health disrupts so many plans, but I thought it would be interesting to take a look at some life changes I implemented this past year and how they benefited me. With my unique challenges, I often need unique twists on traditional life changes to make them work for me!

I also want to note - this is solely meant as an interesting post that might be inspiring or useful. Everyone has different things that work for their lives. Just because something works for me doesn't mean I expect it to work for everyone! But I wouldn't know about many of these if other people hadn't taken the time to write about them, so I'm trying to pass along the favors.

Cell Phones Off Before Bed 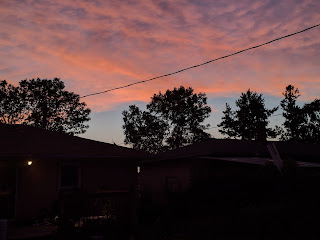 Sometimes I wish that I could cut social media out of my life. However, between my business demands, my deafness, and the aspects of social media that I really love, it's not going to happen. Still, we made the decision in 2017 to leave our cell phones out of the bedroom when heading to bed, and it's made a BIG difference. Instead of getting caught up in what is happening on Facebook or responding to messages or getting sucked into article after article, I can instead focus on talking to my husband (and dog, haha!) and reading. Instead of checking the cell phone compulsively every ten minutes, I can just focus on my book and settling my brain down for bed.

It's made a huge difference in my stress level, sleep quality, and communication with my family. Of course there are plenty of times when Nathan and I will be discussing something and wish we had our phones to fact check a subject, but it's not a huge issue.


Individualizing How I Bullet Journal 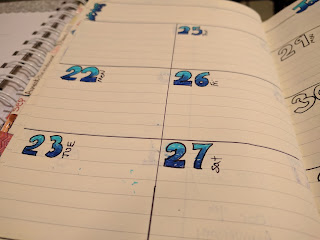 I don't know that my bullet journal really qualifies as a bullet journal anymore -- it has more in common with a regular planner. But I really love the format where I can make each page exactly what I want it to be, and that I can have all my important life information organized and easily searchable. I may not track all my details of every day anymore, but the main organizational functions of bullet journaling have been tremendously helpful for organizing my life in a broader sense. 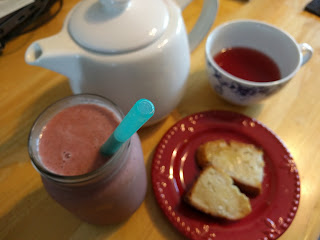 This may be one of the closest things to an actual resolution that I employed this year. At some point I read some article about waste and whatever they said about straws (I can't quite remember now) really struck a chord with me. See, for the longest time I had to take a lot of powders in my drinks for my health problems, and I preferred to use a straw to stir it up rather than a spoon. This year I determined to break this habit as there was no longer a need and it had become a comfort rather than an asset. All was going well until the last month when I started drinking smoothies again. I'm one of those people that is sensitive to cold (plus, as you may know, Fibro accentuates all pain) and drinking a smoothie without a straw HURTS. So I was back to using a straw a day. Which, compared to the average American, I don't suppose is a huge deal, but I was a little miffed at myself. My resolution had been working so well! Then Christmas came, and my mother gifted me a set of reuseable straws, along with a little cleaning brush. They are kind of bulky and took a little getting used to, but now I am SO HAPPY. I have my resolution AND my straws.

(I don't know if my mother actually knew about my difficulty or if she's just a genius.)

I also switched over to cloth coffee filters, which has been fun and much less fussy than I originally anticipated. 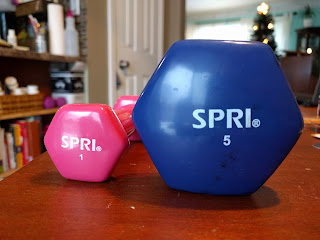 Yeah yeah yeah, an exercise regime is the most popular new years resolution. Well, that and dieting. In my case, it wasn't so much a matter of getting fit, but of dealing with headaches. My neurologist had recommended a physical therapist two years ago, but due to one thing and another, I just didn't get into see her. This summer, one thing led to another and we finally made the appointments. It was a commitment, as I had to go in twice a week, but OH MY GOODNESS. It made such a difference for my migraines. I still have other types of migraines and headaches that really affect my life, but the physical therapy helped with the most consistent ones. It was amazing. After three months of work I've moved up from my piddly 1 lb starting weights, to 3 lbs-8 lbs (depending on the exercise). A small step for most of mankind, but a HUGE one for me!

Not all physical therapists are the same, and this one is supposedly extremely exceptional. I feel tremendously blessed to have been recommended to her. 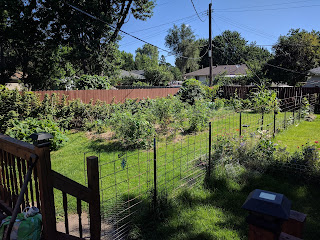 2016 was the first year of my garden, and it was sort of a golden, new soil, new beds, weed-lite paradise. I got spoiled. Then 2017 came around and the little green barbarians started waging war on my garden.

I quickly realized that I needed a good system to keep the weeds down or the garden was not going to be worth it. I tried grass clippings, but the weeds just shot up through those. So then I tried laying down cardboard boxes first...

...oh the beauty! I still had some weeds to contend with around the edges (Creeping Charlie, ugh!), but the cardboard helped beautifully. In some places I put straw or grass clippings over the cardboard so that it looked nicer, but in other places I just left the cardboard plain to make an easy walking path that wasn't infested with...er...things that move on their own.

We have Amazon Prime and, as you may suspect after reading about my Straw Challenge, all the waste of those boxes really lays the guilt on my soul, no mater how recyclable they are. So using them as *free* garden mulch was super relieving. (I don't put waxed boxes on the garden, or that has a heavily printed exterior).

Having used some cardboard mulch last year, I knew that the cardboard under a layer of any organic matter would decompose by spring 2018. So this spring I should have some light, fluffy soil where I had cardboard and grass last year and I can rotate some things around. 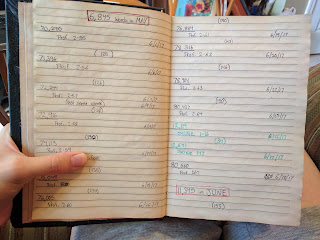 I don't like to churn out words simply to meet wordcount goals. Personally, I find this counterproductive to my creative process. However, in 2017 I knew I needed to make serious progress on "The Professor and the Siren" and I needed to get into a solid writing routine. With my health, I couldn't commit to always writing a certain number of days or hours a week. However, I realized that I could estimate some wordcount goals that would be achievable and inspiring without being creativity-crushers.


First of all, I figured out what a reasonable minimum wordcount would be per month. I told myself that I was going to have some hard months, but as long as I met that minimum goal (4000 words), I could feel that I was moving ahead with my book and be encouraged.

Then, I set a stretch goal for myself. I knew I would not meet that goal every month, but if I could meet or exceed it, that would be awesome. For this goal, I chose 10,000 words, since ideally I would eventually be doing this regularly and thus writing a full manuscript in a year.

This system actually worked extremely well for me. In part, I had some really good health months and that helped. I also really feel that God gave me some specific inspiration and help this year and I'm tremendously grateful for that. In the end, I added almost 90,000 words to "The Professor and the Siren", not counting what I rewrote from draft one.

My difficulty for 2018 is going to be finding a similar stride for the editing phase. I've still got the rest of Act III to write, but the majority of my work this year is going to be editing and that is a little more difficult for me to quantify in goal terms. 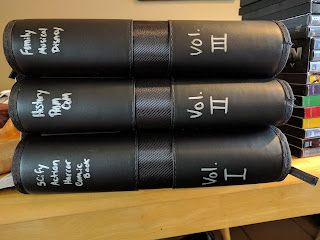 I am almost--but not quite--done with my DVD project. I have a habit of accumulating a lot of stuff. I'm not really in any way a minimalist. (One of my main love languages is gifts!!!!). We had a huge bookshelf of DVDs and I really needed the space and the shelf for other things.

No, I didn't get rid of the DVDs. Not a minimalist, remember? But I did grit my teeth, throw out the DVD covers, and sort the DVDs into binders. We ended up with six of the black binders that you see here. And, honestly, in the end the binders cost almost as much as a new bookshelf would have. But still a lot cheaper than building a little addition onto the house! (lol). Now we have (or will, once I get the last binder done), our entire DVD collection stored in about two cubic feet of space.

Not everything I wanted to change in 2017 happened.

Lest I give you a false impression of my powers of making life changes, I want to acknowledge the things that didn't work. Quite.

I wanted to try to downsize our stuff. Throwing out the DVD cases helped. But if I'm not using something, I prefer to repurpose it rather than give it or throw it away. I have boxes (yes, plural), of clothes waiting to be altered. Still working on finding balance here.

I'm trying to buy less fabric. HAHA. No. Seriously. I'm trying to use up what I have before I buy new stuff. Of course, I still end up buying new stuff anyhow for a variety of reasons...but I am trying in a way I've never done before. (I have so much fabric. The future estate sale my kids are left with will be epic for any seamstresses...) But I'm fairly sure I still ended 2017 with more fabric than I started it with.

And let's not talk about the housekeeping stuff that just doesn't happen when I get more excited about fun new *projects*...

Plus, the plan was to get "The Professor and the Siren" draft two off to Beta Readers in January and that is NOT happening...

(I'm not depressed about any of this stuff, just being honest that I don't meet all my goals, you know?)

So. There you have it. My *trendy* 2017 life changes round-up post, that was also probably the closest I'll do to a Christmas letter this year since nothing hugely big happened this year. (Well, except for the fact that my husband co-designed the Fallout Board Game and got his name on the box for the first time!!!!!!!!) 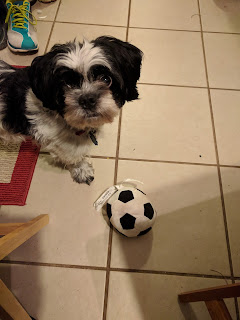 And Mateo continues to learn the individual names for each of his toys and be an overall adorable but way-too-smart-for-his-own-good pup.